The Daily Nexus
Artsweek
Jazz Pianist Blends Genres at SOhO
November 14, 2013 at 5:00 am by Robert Johnson

Tigran, who was born in Armenia in 1987 and lived there until he was 16, bases a large portion of his music off of his country’s native folk music. He often uses musical scales and modes native to Middle Eastern and Southeast Asian music not generally found in Western music.

Walking into SOhO, I found myself in a dim and intimate setting that quietly whispered “jazz.” Even though the band took to the stage 15 minutes later than expected, their opening number was one of the most spectacular things I’ve ever seen. Having never listened to any of Tigran’s music before, I was not sure what to expect beyond Armenian influences.

The character of Tigran’s native country was unmistakable, and yet it was well blended with elements of jazz and pop that kept the sound out of a single genre. As the opening number continued, it gradually got heavier until suddenly the band transitioned into a heavy metal groove reminiscent of bands like Meshuggah and Opeth. As the 25-minute long tune ended, I realized that Tigran isn’t your grandfather’s jazz pianist, but rather a musician firmly influenced by the 21st century who blends together genres old and new to create jazz like nothing you’ve heard before.

For the second tune of the set, Tigran invited the band’s vocalist to the stage. Agbabian vocalized melodic lines instead of singing lyrics. This, combined with her soprano vocal range, made her sound like a cross between Enya, Björk and Sigur Rós frontman and vocalist Jónsi Birgisson. Even with Agbabian creating vocals, there still was a definite metal feel that pervaded the atmosphere, blending with the pop and Middle Eastern influences.

The show continued along a similar vein of jazz amalgamation, with Tigran’s melodic lines expertly vocalized by Agbabian over metal grooves played by Tordini and Hnatek while Tigran improvised over the wall of sound like a true virtuoso.

After their set, the band left the stage but returned again for an encore. Tigran took center stage and began playing a tune similar to Indonesian gamelan music while the band played a techno groove. After some Armenian lyrics by Tigran and Agbabian, the band went into overdrive and finished off the night with 10 minutes of dubstep, amounting to a rich, 15-minute long encore.

At the end of the night, the band’s one-hour 48-minute Santa Barbara debut was a clear demonstration of jazz’s status as a cultural mixing pot of a musical genre. As much as he is touted as an Armenian jazz pianist, Tigran irrefutably fuses together multiple disjunctive genres to create music that proves that jazz is not only a tradition but an ever-fluctuating force that will continue to adapt to, and inspire, the tastes around it.

A version of this article appeared on page  8 of the Thursday, November 14, 2013 print edition of the Daily Nexus. 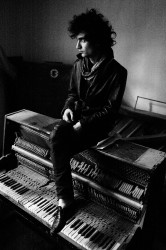