The Daily Nexus
News
Phosphor Analysis Could Improve LED Efficiency
November 6, 2013 at 5:00 am by Peter Mounteer

Researchers at the Solid State Lighting and Energy Center (SSLEC) and the Materials Research Laboratory (MRL) recently announced a breakthrough in their computational research scheme for identifying highly efficient phosphors for use in white light-emitting diodes, known as LEDs.

LEDs are small lights that use the electrical action of semiconductors to generate photons and are valued for their versatility. According to Jakoah Brgoch, a post-doctoral associate researcher with the MRL, phosphors are any materials that emit light without being heated, either by chemical reaction, electrical stimulation or pressure.

Brgoch said they are crucial materials in the production and functioning of white LEDs because they convert lower wavelength light generated by the blue LED into white light.

“When the LED and phosphor emissions are blended in the correct combination of emissive colors, the total light output will appear as white light to the eye,” Brgoch said in an e-mail. “These devices are highly advantageous because they have longer lifetimes and use less power, compared to both incandescent and compact fluorescent lights.”

Although research has been ongoing since January 2013, the breakthrough was made just this past summer and the Journal of Physical Chemistry published the details of the study in July.

The SSLEC and MRL researchers used a computer simulation — as well as the Density Functional Theory — a method of quantum mechanical calculation developed by Walter Kohn, chemistry and physics professor and also a 1998 Nobel Laureate, to approach the problem of phosphor analysis. Now, Brgoch said the breakthrough has the potential to pave the way for the application of LEDs in many different devices.

“The hope is to not only make LEDs less expensive to operate, but to also identify materials that are also cheaper to produce, making the initial investment — the cost of the light bulb at Home Depot, for example — cheaper,” Brgoch said in an e-mail.

The Solid State Lighting and Energy Center aims to develop energy-efficient lighting strategies using semiconductor materials. Currently, standard LEDs operate at an average efficiency of about 100 lumens per watt, while the target efficiency for SSLEC researchers is 300 lumens per watt.

The phosphors currently used are not adequately efficient for use in high-brightness, high-temperature lighting — such as stadium lights and car headlights. The most commonly used phosphor is yttrium aluminum oxide, often implemented in the construction of cell phone camera flashes. The use of this compound in such devices gives the unit its faint yellow color, Brgoch said.

Furthermore, identifying new phosphors for use in LEDs is what Brgoch said is one of the more practical ways to improve their efficiency. Other methods exist, such as cooling with fans or water, but these solutions are more cumbersome to implement on a small scale.

“In very confined spaces, cooling fans and/or water is not a feasible solution, so having thermally-stable lighting is the best solution, as of right now,” Brgoch said in an e-mail.

Steve DenBaars, materials professor with the department of electrical and computer engineering and director of the SSLEC, also talked about ways in which researchers are trying to reduce heat emissions of LED lights. In fact, he said scientists have been doing this sort of work for the past seven years.

“We have developed new devices which emit less heat,” DenBaars said in an e-mail. “We also have been making LEDs, which are not affected by heat, as much as current ones.”

DenBaars stressed the importance of such research, saying better lighting technology will reduce both costs of production and harmful impacts on the environment.

“LED lighting can save the U.S. billions in wasted electricity costs — the equivalent of 50 gigawatt power plants,” DenBaars said. “This will in turn reduce green house gas emissions.” 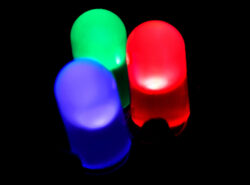 Researchers have found highly efficient phosphors for use in white light-emitting diodes, known as LEDs.

A version of this article appeared on page 3 of the Tuesday, November 6, 2013 print edition of the Daily Nexus.