The festival featured local vendors selling and trading an array of surfing supplies, clothing, jewelry and artwork as well as $50 gift baskets and raffle prizes from businesses such as Trader Joe’s. The event also provided live Hawaiian style music from the Santa Barbara Ukulele Club.

Sally Saenger, the SBCC physical education instructor in charge of coordinating Surf Fest, said the event not only helps the team, but also benefits the local economy and brings together many different local artists and other vendors.

“It is a great way for artists and craftsmen to get their feet wet,” she said.

Other local surf organizations also took part in the festivities, such as Santa Barbara County Surf Club, who used the event as a place for coordinating future surfing excursions or other similar activities.

Robert Brunner, a surf memorabilia collector, said he found the event ideal for anybody looking to stock up on ocean-related paraphernalia.

“Surf Fest is a great community event for people interested in new or vintage surf equipment,” Brunner said. “It is a perfect opportunity to get your hands on some good boards for not a lot of money.”

Surf Fest attracted both local community members and tourists alike, as Camille Ysebrands, a local business owner who has participated in the festival since its first year, said she was excited to see the large turnout. She said the event has evolved from just a single row of stands with five or six vendors to a full-blown bazaar.

“This is definitely the biggest year, with the best vendors I’ve seen so far,” Ysebrands said.

The most popular swap meet item was surfboards, but there was also a generous selection of other boards for bodysurfing and skimboarding. Second-year biology major Philip Proctor said the market made shopping for surf-related items easier for both buyers and sellers.

“It’s really convenient to have all the stuff you’re looking for in one location like this,” Proctor said. “Surf Fest is like Craigslist in real life.”

Aside from surf gear, vendors also offered artifacts and artwork from other countries, such as Costa Rican woodwork and handmade Ugandan jewelry. Other items included wind chimes, a wide variety of minerals and stones — such as Tiger’s Eye — and natural skincare products specially designed for surfers and beachgoers, as well as bathing suits and an archive of old surf movies and magazines. 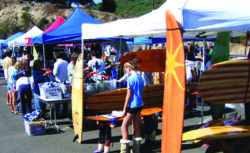 A version of this article appeared on page 3 of the Monday, November 4, 2013 print edition of the Daily Nexus.