The event stood as part of a worldwide “Thrill the World” initiative, organized by World Dance for Humanity, a Santa Barbara-based non-profit organization that raises funds for grassroots projects in Rwanda. Under the previous title, World Dance, the globally-represented organization has hosted a series of flash mobs to raise funds for food and education in African countries such as Nepal, Uganda, Liberia and even Santa Barbara’s own Sarah House, which provides shelter and “end-of-life” care to low-income individuals. As of this spring, the group now assists 12 different community cooperatives in post-genocide Rwanda under the name, World Dance for Humanity.

Executive Director of World Dance for Humanity Janet Reineck said the flash mob performances of “Thrill the World” strive to educate the public on humanitarian crises such as the 1994 Rwanda genocide, which took the lives of an estimated 500,000 to one million people, since the dance is performed simultaneously in a number of locations across the globe.

“It’s not just talking global, it’s doing global,” Reineck said. “We are spreading the word about the possibility of doing dance for a good cause, not just for yourself. We live in a place that is so blessed, we have food to eat, clean water to drink, a roof over our heads and so our motto is to get over yourself and get something going on for the world and for the community, and that’s the spirit we dance in.”

The Courthouse was a perfect location for the flash mob, Reineck said, as its beautiful downtown location helped bring the dance to life.

“I’m sure this is the most spectacular setting of any Thriller [flash mob] that happened today anywhere in the world,” Reineck said. “Everybody’s happy; everybody’s in a spirit of good will and helping, and it’s a time to experience life together and then we flash mob for four days.”

After the Courthouse performance, the zombies roamed down State Street for the next hour, breaking into Michael Jackson’s moves at every chorus.

There were many other performances over the weekend, including a large mob at Michael Jackson’s old residence, Neverland Ranch, in Los Olivos. The next “Thriller” dance will take place in downtown Santa Barbara this Saturday at Santa Barbara’s first Open Streets Project event. In light of Open Streets, a growing international movement that blocks out streets for a day to celebrate community activities, a traffic-block of 2.5 miles will be implemented along Cabrillo Boulevard.

“There’s a double benefit to this — not just everyone gathering and having fun and watching such an amazing spectacle like the undead coming to life, but also the humanitarian efforts around the world, the women of Rwanda and the people in power to be more sustainable in a fair trade, in a self-improvement kind of way,” Remis said.

First-time World Dance for Humanity participant Glenys Archer said he appreciates the opportunity to dance with other community members for a global cause.

“It’s fabulous. I think it brings a lot of joy to people, and also the audience came with the makeup. They really wanted to become part of the movement, which is really fun and is about dancing and expressing yourself,” Archer said. “It’s that expression of freedom of spirit.” 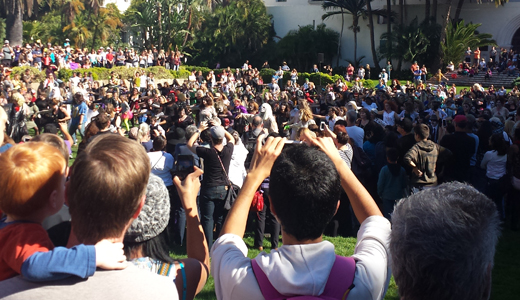 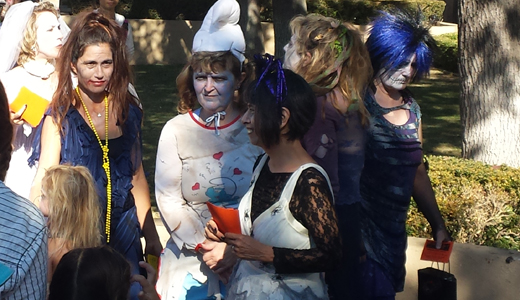 A version of this article appeared on page 1 of October 29th’s print edition of the Daily Nexus.

He was born to love everyone, even bad.

Seems this kind of event is proliferating, bringing people out for a good cause. I’m sure Jackson would approve. Especially nice to see in Santa Barbara of all places.

Thrill the World is a great idea. I’m glad to see it catching on and collaborating with other philanthropic groups. I agree with the other poster here–Michael Jackson would be proud of this legacy for his famous song.