The Daily Nexus
News
SFJAZZ Collective To Perform at UCSB Tomorrow
October 16, 2013 at 5:00 am by Elliott Wright

The Collective, founded in 1983, performs jazz, Latin and other global music and values the skill of improvisation, according to the SFJAZZ Collective’s website. The Collective consists of around 200,000 fans, and UCSB alumni, including Bobby Hutcherson, Josh Roseman, Eric Harland and Stefon Harris, who took part in its creation. Tomorrow night’s performance will begin at 8 p.m. in Campbell Hall.

On Oct. 10, the SFJAZZ octet commenced their month-long tour at the SFJAZZ Center in San Francisco and is coming to Santa Barbara as its third stop. Marshall Lamm, SFJAZZ Collective‘s publicist who has been working with the group since 2006, said performance quality for the Santa Barbara show will be great since the group has done a number of recent performances.

“They came to San Francisco a little over two weeks ago and rehearsed for a week,” Lamm said. “They have been rehearsing, they have been performing — they will be finely tuned by the time they get to Santa Barbara.”

According to Lamm, the Collective will be playing their own original material, in addition to arrangements of work by other well-known jazz musicians, including John Coltrane, Herbie Hancock and Stevie Wonder.

In addition to their performance, the Collective will hold a master class with UCSB Jazz Combo students, who have prepared pieces to play for the group. Second-year percussion major Nick Diamantides, who is part of the student group, said he is looking forward to performing for the Collective.

“We are going to be playing a piece called ‘Cubano Chant’ for them,” Diamantides said. “They are going to [hold a] clinic [for] us, give us suggestions and tips, and hopefully they will play a few pieces for us.”

Diamantides said the prestige of the SFJAZZ group makes him excited, although slightly anxious, to meet them and perform in front of them.

“I’m feeling pretty nervous actually, but besides that, I think it’s really motivating and cool,” Diamantides said. “It’s going to help me grow more as a musician, which I’m stoked about.”

Third-year music major Miller Wrenn, a bassist currently teaching one of the jazz combos at UCSB, said SFJAZZ’s performance will be enjoyable for all audiences.

“It will be an eye-opening experience, regardless of anyone’s previous experience with jazz,” Wrenn said. “It’s worth seeing if you love music at all.”

Lamm said he also agrees that the SFJAZZ Collective will offer an enjoyable and engaging experience for jazz and non-jazz fans alike. The jazz fans, he said, can expand upon their jazz knowledge, whereas people with less exposure can gain a general feel for the music genre.

“If you are a jazz fan at all, these are the guys that you need to know, need to be able to talk about and need to emulate,” Lamm said. “They’re very professional and they have a lot of fun. It’s a really cool way for people who like jazz to get more into it. For those people who don’t like jazz at all, this is a really great place to start because you are going to hear classic jazz repertoires.”

The band has left an impacting influence on many jazz musicians and even fans of the music, Lamm said.

In celebration of their anniversary, Lamm said this tour will uphold the past, present and future qualities of jazz music, as well as honor the members that continue to contribute to the Collective.

“The band has changed personnel over the years and played a different repertoire,” Lamm said. “The influence of the whole show will be about looking back and looking forward at the same time.” 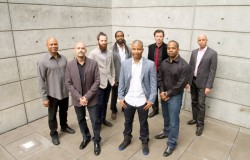 UCSB’s Campbell Hall will be the Collective’s third stop after their month-long tour at the SFJAZZ Center in San Francisco and another stop in Chico. This year marks the 10th anniversary of the SFJAZZ Collective as a group.

A version of this article appeared on page 4 of Wednesday October 16th’s print edition of the Daily Nexus.