The Daily Nexus
Recipes
Peace, Love and Simplicity
October 16, 2013 at 5:00 am by Allison Wright 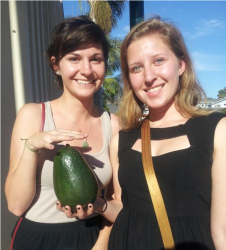 OTM Writer Allison Wright and avocado enthusiast Biliana Kirilova show off an avo almost worth its weight in gold.

If you’ve ever heard the phrase, “expensive taste,” you’re probably familiar with the food industry’s best kept secret. Expensive taste, as in dropping $85 for a five course fixed menu consisting solely of tapas, world travel for the sole purpose of dining at a restaurant rewarded with three Michelin stars, or foie gras, (if you don’t know what it is, you probably can’t afford it). It also proves to be a serious detriment to the lightly lined wallets of broke foodies on college campuses everywhere. We, as consumers of quality food, when on hiatus from the ramen diet, set this standard for expensive taste. Basic economic principles explain that the higher the quality, the higher the price. People are willing to pay more for the tastes and amenities of fine dining; conversely, no one balks at the low quality beef in McDonalds hamburgers. In essence, you get what you pay for. Or do you?

The first weekend of October marked the 27th annual California Avocado Festival toting the motto, “Peace, love, and guacamole.” Sounds good to me. Avo experts and guac enthusiasts alike flocked to Carpinteria to take part in the celebration of the fatty fruits. In addition to a world of avocado inspired goods, (live avo truffles, avo cupcakes, and even avo lotion), the thoroughfare hosted four separate stages with a constant stream of live music and thousands of meandering souls in search of free samples. If one nudged their way to the front of one of the farmer’s market-esque booths, spoons scooped giant mouthfuls straight from freshly halved avocados. If able to remain in this prime freebie zone, one could even try to discern the differences in different strains of avocados. For those that are curious, avoid MacArthur avocados. Their oily flesh and acrid sweetness may surprise eaters more accustomed to creamier Hass avocados found in the standard grocery store.

But this gets us back to the idea of expensive taste. While at the Avo Fest, I purchased one relatively massive Lamb Hass avocado for $2.50. This behemoth was a good six inches in length. At a fixed price of two bucks fifty for a single avocado, I was definitely leaving with the largest fruit I could scrounge up. After a little gentle rummaging and some disdainful stares, I found the my giant avocado and began planning how best to deliciously demolish it.

On the long trek back to the parking lot, I encountered another similarly gigantic freak of nature. Cradled in the arms of a fellow avocado enthusiast was what turned out to be a $50 avocado. Only slightly more impressive than the one pleasantly swinging from the bag around my wrist, this avocado was twenty times more expensive. What made this avo better? After sampling the Lamb Hass, I didn’t think I’d find a more exemplary specimen. Could this smooth, green skinned, precious gem of a fruit really outweigh my pebbly skinned bargain box special? As it would turn out, this guy paid so much because he was willing to pay the most for it. When the bidding ended, he was the lucky dope to part with one Grant and walk away with the prized avocado.

This poor fellow wasn’t the only one duped into paying too much for food. Festival food vendors notoriously overcharge for their goods and the Avo Fest was no different. Smoothies sold for seven dollars and sandwiches for close to ten. I was ecstatic to find tacos under five. This relatively inexpensive buy proved to be the most satisfying of the day. Loaded with pastor, onions, cilantro, spicy salsa, and a heaping portion of guacamole, this was no ordinary plate of tacos. Despite being deceptively simple, the delight that accompanies a ton of mashed avocados and a sinfully greasy meal was overwhelming. Enjoying such a masterful assemblage of ingredients was more than just a need to fill the stomach–it was sheer pleasure. This was inexpensive, basic, and delicious eating.

This is where we get back to the secret. Good food does not have to break the bank. Good food doesn’t even need to be complex, (though sometimes complex flavours are an indulgent treat). When you give no care to the grease dripping down your chin and can not fathom taking the last bite of a guac smothered, uber satisfying taco, that you realize the ridiculous nature of a Michelin star. There’s a certain thrill in the mixture of smoky, meat-grilling smells mingling with the sweet scent of frying funnel cakes. With olfactory overload and the subliminal hum of multiple jam bands at close proximity, getting lost in the form of the taco seems pretty wonderful. This is a “special journey” in itself. 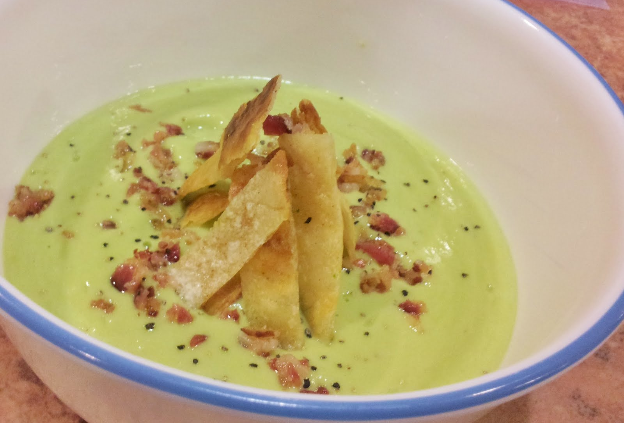 Bacon bits, pan fried tortilla strips and a dash of pepper spice up this simple soup.

In a blender, combine two large avocados, (or three small), half a peeled cucumber, a small red onion, one cup of scalded cream or half & half*, juice of a lime, one cup of water, and cilantro, salt, and pepper to taste. Place in the fridge to cool. While chilling, cook four strips of bacon in a large pan. After removing cooked bacon from pan, fry whole corn tortillas in the remaining fat. Chop fried tortillas into strips and bacon into bits. Garnish soup with tortilla strips, bacon, and pepper.
*To scald cream, heat in a saucepan over medium heat until it just begins to steam. Remove from heat to prevent from burning. This prevents the soup from whipping.

Wow! Sounds yummy! Way better than the stuff called guacamole, filled with so many veggies that it’s like a salsa. Making this into a soup is a great idea.

Very well written, may I add.