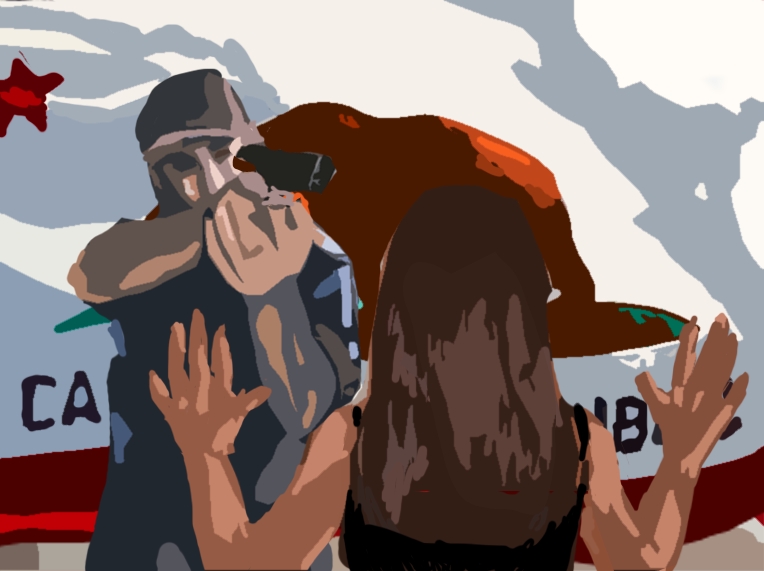 It was sometime in the November of last year that I sat up in bed one morning and realized it was so cold in my bedroom that I could actually see my breath. “That’s it,” I thought, “Sorry, Dublin, but I’m out of here.” With that resolution fresh in mind, I began to attend a few of the exchange student program meetings at my college in Ireland. Finally, I just grabbed a map brochure, circled every place that guaranteed more than two weeks of sunshine a year and nine months later I found myself stepping off of a plane in California, bound for UCSB. “Job well done,” I thought.

Well, not exactly. As I stepped forth smiling, ready to make my mark on the “New World,” I was promptly greeted by a gun pointing straight at my face. Okay, well, technically it wasn’t pointing AT my face — it very well may have been securely inside its holster — but it was definitely a gun. I’d never seen one in real life before, only on television. Even our police force rarely carries them! On top of that, never having done much travel outside of the European Union (where we have this wonderful thing called “freedom of movement,” which allows you to travel between EU countries with no hassle at all), I wasn’t expecting what technicalities awaited me before I was permitted to actually step onto American soil. First, I was grilled by the TSA, and then, perhaps because of what I consider to be my charming aloofness, I was grilled again, even harder this time. My documents were then inspected by more guys with guns, my fingerprints were taken and after a long wait, I was given a farewell fondle before I finally got to step into the queue (or line, for all you Americans) that would take me out the airport exits.

Feeling sufficiently violated, I shuffled out into the street and felt my jaw literally drop because of what I beheld all around me: Total sunlight, glorious and unadulterated. I’ve now been here for about a month, and I’ve concluded that Santa Barbara redefines the word “paradise.” I constantly find myself beaming about something, whether it’s the sunshine, the ocean and mountain views or just the half-naked Adonises and Aphrodites rolling around on skateboards all day long. I could certainly get used to this.

That’s not all though: I also love that so much about the U.S. just makes sense. To start with, all of the streets are laid out in a grid, making it nearly impossible for you to lose your way, which is great for me, being known to get lost indoors. Not only is the U.S. easily navigable, but also, if I ever do get lost, I can just pop into a shop and ask for directions because, guess what? Things are actually open here! Try going shopping in Brussels on a Sunday, or after 5 p.m. or even just on a nice day and you’ll surely get laughed at. Sometimes things will just arbitrarily close and you’re expected to deal with it, even if you need to pick up a prescription or have a baby. Something else I could get used to is the free use of bathrooms. I mean, when nature calls, you’d think it’d be a human right to be able to go, but in Europe, you’d better have 50 cents on your person, otherwise you’ll be getting closer to nature than you ever intended to. That being said, perhaps we’re paying for complete privacy, because the public bathrooms around here seem to think that half a door is an acceptable amount of door. I’m sorry, America, but I don’t want to be able to see my neighbor’s knickers ’round their ankles, thank you very much.

Something else you’d think should be some sort of natural human right is free water, but, again, in Europe, you’d be wrong. I asked for tap water in Paris once and the waiter walked away and never came back. By contrast, in the restaurants here, they even ice it for you, without even asking! Who would’ve thought?

My sojourn here is only beginning, and as cliché as it is, it still doesn’t feel real to me. America is so weird and wonderful that I constantly feel like a Disney princess, sounding my barbaric yawp from the roofs of the world (a.k.a. the balconies of Isla Vista), just daring someone to come pinch me. I guess I’d better start ticking things off my Santa Barbara bucket list before I wake up from this dream!

Naomi Rea is a third-year visiting from Trinity College in Dublin, Ireland.

For more tales from abroad, check out the new “Nexus International” section here.

A version of this article appeared in the Tuesday, October 8, 2013 print edition of the Daily Nexus.