The Daily Nexus
News
A.S. Senate Discusses Voting ‘No Confidence’ in Napolitano
October 3, 2013 at 5:00 am by Tiana Miller-Leonard
Last night marked the first Associated Students Senate meeting of the 2013-2014 school year, opening the way for students from several campus organizations to propose a resolution criticizing the appointment of Janet Napolitano as the new president of the University of California, amidst controversy over her work in U.S. immigration issues.
The new UC president formerly worked as the governor of Arizona, as well as United States Secretary of Homeland Security, when there was a record rise in deportations. Now her track record is making many students question her ability to prioritize the needs of undocumented UC students, and various students groups — such as Human Rights Board, the Black Student Union and UCSB Improving Dreams, Equality, Access and Success (a coalition of undocumented students) — all formally denounced her appointment at yesterday’s Senate meeting.
Napolitano was appointed by the UC Regents to replace Mark Yudof as UC President in July, with all but Student Regent Cinthia Flores voting in favor of her appointment.
At Public Forum, students and other community members voiced support for a unified resolution called “A Resolution in Support of Undocumented Students and Immigrant Communities,” which presents several demands to recently appointed Napolitano. The Resolution concludes by stating that, if passed, the Senate expresses “no confidence” in Napolitano’s ability to perform as UC President. However, as of press time, Senate decided to not vote on the issue and wait until next week to reach a final decision.
Katlen Abuata of Human Rights Board was the first to approach the A.S. Senate with her support of the resolution, and Abuata said Napolitano’s appointment jeopardizes the safety of certain minority communities on campus.
“You all are here and you have the extreme privilege of representing a diverse group of students; some of these students are undocumented,” Abuata said. “Some of these students have a fear of having a leader of their UC system being someone that deported hundreds of thousands of people.”
Second-year Mohsin Mirza, who also came on behalf of HRB, said the process by which Napolitano was selected does not reflect the interests of the general UC student population.
“I think we need to highlight the fact that her appointment in the first place was completely undemocratic,” Mirza said. “None of [the potential candidates] have any experience with education … As student leaders here, you’re asked to represent the students … I don’t see a group here saying ‘We love Napolitano. We want her to be here.’”
Gloria Campos of UCSB IDEAS provided a personal testimony of her experience as an undocumented student, explaining why she felt Napolitano was a detrimental influence to the UC system.
“I am an undocumented student. I was at that meeting yesterday with Napolitano,” Campos said.  “I can’t say how I felt … to have someone that has caused so much damage to our community — not only students who are undocumented, but students who aren’t undocumented who have parents [who] are undocumented … I don’t know if you can understand what that feels like to have her as our new UC president.”
Liam Stanton, another student at Public Forum, provided another perspective on the resolution. While Stanton said he disagreed with Napolitano’s appointment, he urged Senators to move forward through open negotiations, rather than a vote of no confidence.
“The reality of it is that now she is the president of the UC system,” Stanton said. “I don’t believe that an utter show of no confidence gets us anywhere.”
Fourth-year Norma Orozco also came to Public Forum to stress the negative impact of Napolitano’s appointment on undocumented students at UCSB, saying that UCSB should value their undocumented community.
“This year, in fact, we have the largest amount of undocumented population at UCSB, and it’s something to be proud of,” Orozco said. “It is our duty, our responsibility, and it is our right to tell her that we have no confidence in her.”
Chancellor Henry T. Yang also spoke at the meeting, assuring the student body that he would be available for any necessary support. Additionally, Off-Campus Senator Jake Speyer announced he would be transferring schools after Fall Quarter, and therefore resigning from his senatorial position, which means the candidate who received the next most votes during last spring’s elections will be offered the position.
The executive officers presented their first reports for the coming school year, announcing what projects would be released from their respective offices. These include renovations to the UCen, a student-led classes initiative, a waitlist system to be implemented on UCSB GOLD and a visit by President Napolitano to the campus in November, at which students will be able to directly address her with concerns.
This article appeared on page 4 of Thursday October 3, 2013′s print edition of The Daily Nexus.

[CORRECTION: The print version of this article was incorrectly titled, “A.S. Senate Expresses ‘No Confidence’ in Napolitano.” A.S. Senate has not taken any action on the proposed resolution.] 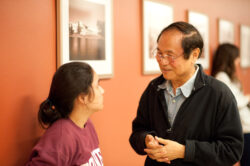 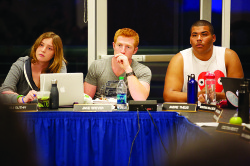