The Daily Nexus
News
Smartphone App Allows Students to Find Local Bus Stops, Navigate Routes
October 2, 2013 at 5:00 am by Suzanne Becker
Students struggling to catch the next bus can now use I.V. Bus Routes, a recently released iPhone app displaying the arrival times and locations of nearby buses in the Isla Vista area.
Available in the iTunes store for $1.99, I.V. Bus Routes displays a map of local streets and there is a marker for the user’s location, as well as for arrival times of the 11, 15, 24x and 27 bus lines. App developer Sanchit Gupta, a second-year computer science major, conceived the idea for his new product after his bike broke Spring Quarter and he struggled finding available bus routes. Gupta is also the founder of Gaucho Rides, a ridesharing-planning service through which students can carpool to and from campus.
According to Gupta, his interest in software development extends beyond transportation systems, as Gaucho Rides and I.V. Bus Routes were primarily the results of his interest in improving student life.
“The thing I love about computer science is that if there’s a problem, and I feel like I could fix something to make it better, I can just go ahead and implement it — just learn the skills necessary and try my best to improve it in whichever way I think it could be improved,” Gupta said.
After I.V. Bus Routes was first released June 11, it racked up around 1,000 downloads by September, and it currently has a five out of five star rating in the iTunes store, with the app currently receiving roughly 15 downloads a day.
Bhanu Khanijau, a second-year computer science major, said the app helped him tremendously when he was living in the residence halls.
“I used it [the app] a lot last quarter when I lived at F.T.,” Khanijau said. “I used to wake up in morning and not know if I could make the bus to class or if I would have to bike in.”
Gupta plans to release new updates to I.V. Bus Routes in the coming weeks, adding directional information for each bus and fixing bugs.
Ahana Sarkar, a first-year economics and accounting major, said it was useful to use the app upon first arriving to UCSB.
“My first week at UCSB was a little confusing because I had no idea which bus to take, but now that I do know, it’s super convenient to know exactly what time they leave,” Sarkar said. “I wish he had enough time to add all the stops for the entire city.”
This article appeared on page 1 in the the Wednesday, October 2, 2013 print edition of the Nexus. 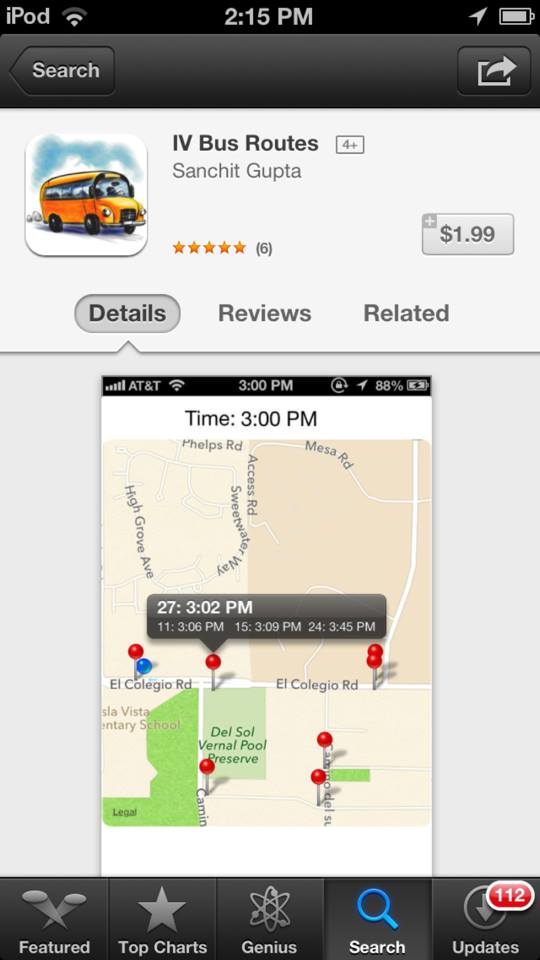