The Daily Nexus
Opinion
Farewell from Opinion: L & T Sign Off
June 6, 2013 at 5:00 am by Tiare Hoegerman and Liv Cvitanic

When I first took my graduation gown out of its packaging, I nearly cried. I am not wearing that. No way. No. Never.

‘If you put that thing on,’ my inner voice-over warned, ‘the bubble will finally burst. College will actually end. Your job at the Nexus will officially be over. Living in a garage with two other roommates in the beautifully nasty student slum that is I.V. will no longer be socially acceptable. Tipsy Tuesday will suddenly be irresponsible.’

‘Run to the street, find an I.V. couch fire and toss it in before it’s too late.’

In retrospect, perhaps that moment was one of my more melodramatic ones. After all, of course it’s over. You only get four years. We all know that. Since I first began as a wide-eyed science writer for the Nexus, time was never shy to make its nonnegotiable presence known.

Each year, I saw the paper’s outgoing editors pry their own clenched fingertips from their beloved positions. I saw seniors whimper and sniffle as their own graduation robes came to take them away like grim reapers clad in caps and tassels.

Apparently, however, life after college exists. I’ve spoken to Gauchos on the other side, and they all assure me that surviving the G-bomb is possible.

So, like any good college educated girl, in the past month I’ve begun preparing for life after UCSB expels me from its warm, cozy womb. I’ve changed careers at least 10 times (nothing surprises my poor parents anymore). I’ve applied to what feels like a trillion jobs and two trillion measly paid internships. Yet each time a questionable interview magically transforms into an offer, one pesky question lingers: “Will this be within even a mile as awesome as working for the Daily Nexus?”

To our quirky and talented writers, to Copy (the grease to this machine), to the rest of the Ed-Staff and to all who (ironically) call the Nexus “work,” — if I could write any one of you a letter of recommendation encompassing how I truly feel about your potential, you’d be rocketing your way out of the Nexus and straight to the top of the New York Times. When I finally join the real world and get myself one of those things they call a “career,” I hope to be blessed with co-workers who are as dedicated, hardworking and awesome as any given Nexite.

To Liv, with my right hand woman and the love of my professional life — we’ve been through too many ctrl+Z’s and S’s together to count. We’ve pushed the limits of the word “publishable” in the very best and nastiest of ways. As an editor and an English major, trying to describe the past two years working with you is simply embarrassing. I essentially have a Bachelor of Arts in words and, still, I cannot come up with one single syllable that fully describes the caliber of queen bee that is Olivia Cvitanic .

To Allyson and Emile (your 2013-2014 Opinion Co-Editors), you two are no exception to this I-love-Nexites rant. You’ve already proved to Liv and I that our baby is in good hands — with a tagline like “Hayley E. puts the “jazz” in vajazzle,” who could doubt you? Welcome to the best job on campus. 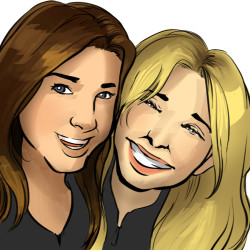 days from now, when I don the dreaded black robe of undergrad death and parade my blubbering self across that graduation stage, my heart will be swollen with memories of all the living that I’ve packed into these past four years. I’ve surrendered to love, poured my soul into my studies, carved my name in the SB waves and finally, I’ve learned to let this beautiful bubble burst.

Tiare Hoegarman has finally accepted Liv’s offer for her hand in marriage. They will remain co-editors at a new newspaper, they’re sure.

“I know where you can stick your comma” were the words that greeted me upon my first visit to the Nexus. They were chalked on one of the cement walls by a head Copy Chief in 2009. “Chalking the walls,” I learned, was a rite of passage once your time at the Nexus came to a close. I quickly became obsessed with everyone’s pithy good-byes — “Offending sororities, one line at a time…,” “sdagoadgdag”, for example, or the detailed chalk illustration of an organic molecule drawn by former Science & Tech editor Nader Heidari, who passed off his position to me and another writer two years ago. Even now, two and half years after I first encountered the chalkings, I still wander the premises unearthing new farewells. I guess you could say I’ve always been intrigued yet daunted by endings and how students before me decided, blunt piece of chalk in hand and limited wall space, to bid adieu to college.

I’m struggling with that now. (Yes, I’ve already chalked. My co-editor and I decided “Redefining Publishable” best summed up our tenure as Opinion editors, in case you were wondering.) But this is the chalk version unabridged, and writing this makes it very real that I won’t have the privilege of being with all my fellow Nexites — people I’ve spent the past year in almost daily contact with — any longer. So I’ve decided that instead of the normal life advice and summation of my undergrad experience (In a nutshell, it’s been awesome. Now, you know.), I’d rather acknowledge the people that I spent my time at the Nexus with, regularly bonding with over grammar quandaries and highly questionable submissions.

To my Science & Tech and Opinion co-editor, Tiare Hoegerman , I can’t thank you enough for putting up with my shenanigans over the past two years. We made the move from editing stories on computer “qubits” and the physics behind coffee cup spillage to delicately handling articles about the merits of porn and the Wednesday Hump’s “Sex Position of the Week.” And, for the record, I can’t imagine thinking of those positions with anyone else and then describing them to the most talented and virtuous Nexus artist with anyone else. (Hey, Mingchen!) You are one of the most talented and kind people I’ve ever had the opportunity to meet and work with. I consider myself lucky to be your friend. I can’t believe I will no longer get to leave you an array of hilariously terrible and wildly offensive headlines to choose from, nor will I get to enjoy the many hand-written notes you leave me explaining that day’s agenda. In those notes, you never failed to ask how my day was going or include something you knew would make me laugh. I can’t believe we won’t get to sit by side-by-side in our office — the unlucky one on that horrible creaky blue chair — trying to think of a headline that could possibly work for an article that, for example, likens elective piercings to stabbings in I.V.. (“Holes in Our Boidies, Holes in Our Psyches,” anyone?) You’re one of my closest friends, and you have no idea how much I’ll miss you. Whatever you decide to do, you will do it well. It’s just the kind of person you are.

Tina: You run a tight ship. I’m in awe of your dedication to this paper and the people you work with. As Chief Copy Editor, your meticulous attention to fact-checking and grammar are likely the sole reasons we haven’t been sued or called out by grammar aficionados.

Mark: Your writing inspires me, and the unity at the Nexus over the past two quarters is a direct result of your leadership. Thank you for working so hard and churning out some of our best articles.

Kelton: Thank you very patiently reviewing very basic computer skills with me, and forgiving me when I forgot to send you the Opinion “jump” for the front page … It happened a lot.

Yishian: Thanks for suggesting we go to the Nexus two and a half short years ago. You were right; we’d probably like it.

Ryan: I aspire to attain your level of layout genius. Thank you for the InDesign tutorials.

Patrick and Marissa: You both work incredibly hard. The success of the Nexus is direct testament to your efforts over the past year.

And to all our readers and Opinion contributors, thank you for your submissions and invaluable feedback. Many of you bravely shared your stories and your (sometimes) unpopular opinions. Tiare and I cannot thank you enough for your honesty and bravery.

As I mentioned before, I don’t do goodbyes very well. I think loss always necessarily accompanies change, and that certainly rings true when I imagine turning my tassel in 11 days. But before I leave you — and I said I wouldn’t do this, but it’s inevitable — I have to give my brief, cliché advice. I love the following words of wisdom, and this is my farewell, dammit, so enjoy:

-Do something daunting — something you never felt like you could do. Also, do what you love. Do it well, and do it everyday.

-Comparison is the death of happiness.

Liv Cvitanic plans to launch an opinions-only daily publication with Tiare upon graduation from UCSB. That way, the two can grow old while thinking up raunchy headlines.

A version of this article appeared on page 16 of the Thursday, June 6, 2013 print edition of the Nexus.