In college, particularly in Isla Vista, we are encouraged to despise labels. You may be lying blissfully in bed when your partner of x-months asks you timidly, “So, are we exclusive?” Don’t panic. Don’t push them away. Don’t think, “God, there’s the end of a good thing.” I am all for being casual, if that’s what you want. And I absolutely agree that labels can be harmful to your relationship if they are forced or both members aren’t prepared for them. But labels are not something to overreact about. Rather, they are something that should be earnestly considered. You all have your varying notions on reasons for shunning or embracing labels and I’m going to address them as best I can. Sit tight.

The way I see it, labels provide parameters and a good gauge of emotional investment. So often, people remain tight-lipped about what they’re actually feeling. It’s like a competition for who can be the most casual, or care the least. So, it’s ridiculously difficult to gauge whether or not your partner is taking you seriously or really likes you. Thus, the importance of labels. Bear with me.

The talks you have with your partner will vary depending upon your relationship. I personally cannot stand the idea of dating someone for six months and having them still be only your “hookup buddy.” That’s half a year. That’s bullshit. If that’s all they’re keeping you for, they are not taking you seriously. And maybe you’re okay with that, and you want to keep it there. But if you’re emotionally attached, you need to prioritize what you want out of the relationship. I had to watch my friend put her partner’s feelings over her own for months. She wanted to be this relaxed, casual girl for him and, in doing so, she refused to tell him what she actually wanted. If you want something, tell them. Your partner is not a mind reader. When I was three weeks or so into dating my boyfriend, I asked him whether he considered our relationship casual or if he saw it going anywhere. If he said casual, that would have been a bummer, but at least I would have known and I would have been able to behave appropriately. That is the preliminary label you need to jump over. Know what they want out of your relationship so you don’t moon over them pointlessly.

Later comes the exclusive/girlfriend line dance. After a loud and heated debate with a pack of dudes, I think I have a fair idea of the struggle between these terms. When deciding whether to remain exclusive or making their partner a girlfriend, the guys saw it as a pointless transition. It wouldn’t change anything; they already considered their partners at the level of girlfriend and didn’t understand the difference in connotation. However, the way I view it is like this: a girl you’re exclusive with is certainly close to girlfriend status. But being a girlfriend signifies that you are ready to open yourself up emotionally. Exclusive means you don’t have to worry about whether they’re dipping their chip into someone else’s dip or not. But girlfriend means that they’ll tell you about their childhood, their disappointments, their secrets and the extent of their feelings for you. It’s taking the next emotional step. And if there really is no difference, what’s holding you back from just saying it? If nothing really changes, what’s the problem? It will make them happier and there is the opportunity for more emotional satisfaction. I’m not the kind of person who will wait around months just to be a slam piece, and neither should you. Take yourself seriously and tell others what you want from your romantic endeavors or accept that it will sit still as long as you let it. Deuces, and happy humping! 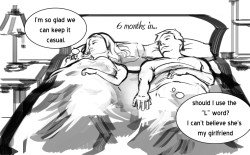 A version of this article appeared on page 12 of the Wednesday, May 22, 2013 print edition of the Nexus.