The Daily Nexus
News
Ribbon Cutting Ceremony Held For Newly Constructed Fence in Walter Capps Park
May 13, 2013 at 1:54 am by Daily Nexus Staff 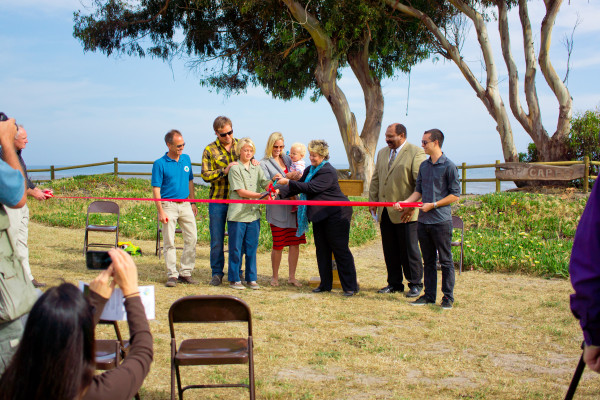 Last Thursday, local officials and members of the public gathered at Walter Capps Park to take part in a ribbon cutting ceremony for a newly erected wooden fence along the park’s oceanside cliff.

According to Siordia, the fence’s funding process was initially planned to be a collaboration of funding between potential contributors such as Associated Students, Capp’s office and IVRPD, among other local entities. Ultimately, however, the county decided to fund the entirety of the $6,300 project in order to deter future potential dangers posed by Isla Vista’s cliffs.

“A.S. money wasn’t used for funds at all,” Siordia said. “It’s a county-owned park, so I think they had the realization to take responsibility for it in support of the community.”

Initiated in September and built on March 24 within three days, the fence is the culmination of a project meant to address hazardous unprotected Isla Vista cliffs, especially in light of two recent cliff-related fatalities this year, Siordia said.

“Cliff falls are a unique issue here. There are not a lot of college campuses around country where you have that and where that’s a problem,” Siordia said. “I’m hoping the fence will raise awareness about that issue because people definitely need to exercise a certain amount of caution around these cliffs.”

A version of this article appeared on page 4 of the May 13th, 2013’s print edition of the Nexus