The UCSB softball team plays its final three games of the season this weekend against UC Riverside.

After a very up-and-down season, the Gauchos have compiled an overall 29-23 record, going 10-11 in conference play. Riverside finds itself with the worst record in the Big West at 19-33 overall and 3-18 in conference games.

“To get these wins against Riverside, we just need to play hard and with heart,” sophomore pitcher Shelby Wisdom said. “It’s our last series of the year and last with our two seniors.”

The “two seniors” Wisdom refers to are centerfielder Jessica Soria and shortstop Keilani Jennings, each of whom have had outstanding final seasons as Gauchos up to this point.

Just last weekend, Jennings hit two home runs in a game against No. 22 Hawaii, the second of which made her UCSB’s all-time leader in home runs with 31. Jennings has been outstanding all year on offense and defense, currently sitting at number one in the Big West in assists with 140 and first on her team with nine home runs.

Soria has played her role as the Gauchos’ leadoff batter even better than she did in her impressive junior campaign. She is second in the Big West in stolen bases with 22 and leads her team in hits (59), batting average (.328) and at bats (180).

“This year has been a roller coaster,” Wisdom said. “It’s been a tough, yet fun year, and the one thing I’ll miss most about it is the great seniors that we had.”

The Gauchos as a team have struggled to put up runs over the past couple months, but the offensive production has picked up considerably in the last two weeks, most notably when they scored nine runs against Hawaii and in an 8-0 win against Cal State Northridge in which six different players had an RBI.

“We played some of our best games in Hawaii, because as a team we were locked in and playing as one unit,” third baseman Jessica Reichner said. “We just need to stay loose and keep playing for each other.”

UCSB has continued to follow the lead of Wisdom on defense and offense as it has all year. Although her ERA has seen a steady drop to 3.22, her team-leading 39 RBI is still second in the conference.

“As a team we have been stringing in hits and hitting the ball hard,” Wisdom said. “If we continue to do that we’ll get wins [this weekend].”

UC Riverside enters this weekend with the worst record in the Big West. While their offense is not bad, currently in fourth place in the conference in on base percentage, the Highlanders own the conference’s worst ERA by far at 5.16.

However, UCSB will still have to be wary of UCR’s strongest offensive weapons in senior outfielders Kayla White and Ariel Shore. White is fourth in the Big West in home runs with 11, second in batting average at .371, and first in triples with four. Shore leads the conference with 25 stolen bases.

“Our team just needs to keep playing strong and fighting like we always do to come out with the wins this weekend,” Reichner said.

The Gauchos’ final games of the season are at Campus Diamond with games at noon and 2 p.m. on Friday and noon on Saturday. 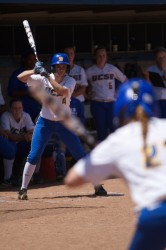 Photo by Peter Vandenbelt of The Daily Nexus.