The Daily Nexus
News
Transit Board May Eliminate Bus Line After Evaluation Period
May 3, 2013 at 5:00 am by Rosalinda Diaz

Santa Barbara Metropolitan Transit District board members discussed the possibility of getting rid of Bus Line 22 — one of the city’s oldest routes — and increasing services for other lines, including Line 24x which runs from UCSB to downtown Santa Barbara, during Tuesday’s meeting.

Due to its restricted budget and low ridership, the Santa Barbara MTD may soon be eliminating Line 22, which runs from the transit center to the Santa Barbara Mission, the Botanical Gardens, the Santa Barbara Museum of Natural History and El Encanto Hotel. However, community members have traditionally objected to eliminating this bus route because it dates back to 1913, when trolley cars were the primary means of public transportation.

“Line 22 has been running for a long time and there used to be a lot more things going on up there, for example, St. Francis Hospital and a lot of doctor’s offices in that area,” Amoon said. “Once the hospital closed, a lot of those offices closed as well.”

The closure of many offices may have been a significant reason why ridership considerably decreased for Line 22, according to Amoon.

“It serves a lot of spots that are popular with tourists as well as locals. Now the reason why it has been brought up for possibility of elimination is that it has it has one of the lowest ridership averages than any of our lines,” Amoon said. “And as you know, the big recession that happened in 2008 had led to a big substantial drop in revenue available for us to use for our bus services.”

Ultimately, the board is dealing with a restricted budget and thus looking to possibly eliminate unused bus lines, Amoon said.

“So we were looking to make some cuts and that seemed like a logical place to make a cut if it came to that, so that was why it was initially brought up,” Amoon said.

The board has decided to extend service on Line 22 for another six months in order to gauge riders’ interest.

The heaviest used bus lines are currently 6 and 11, running from the transit center to Hollister, the airport and Camino Real. Average ridership per hour is also taken into consideration, with lines like the 16 that run to Santa Barbara City College being the highest, causing the buses to be extremely packed during peak hours. According to Amoon, many of the busy lines will be receiving increases.

“What also happened at our meeting was that the board approved some increases to service 24x, 15x, 16 and 17,” Amoon said. “Small increases, but nonetheless, it will be a great benefit for people trying to ride these lines.”

Second-year global studies major Ryan Perez, who has been using the SB MTD to get around Goleta and Santa Barbara, said not finding a seat on busy lines like the 24x is a common occurrence.

“I think it would be great to have more services available on buses that are popular for students and community members. It would really make the trip a lot more pleasant and comfortable,” Perez said. 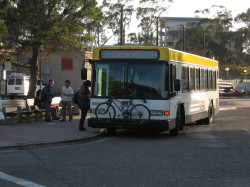 The Santa Barbara MTD discussed the possibility of getting rid of Line 22 ­— one of the oldest in the network — and increasing the number of buses available for Lines 24x and 15x, both of which serve UCSB. Line 22 currently serves tourist destinations such as the Mission and the Botanical Gardens.