The Daily Nexus
News
Fire Damages Vehicles Near Mosher Alumni House
May 3, 2013 at 11:27 am by Emile Nelson and Patrick Kulp

Flames engulfed a Toyota Rav4 in the parking lot between Campbell Hall and the Mosher Alumni House this afternoon, destroying the SUV and charring two other cars.

The Santa Barbara County Fire Department and UCPD arrived at the scene minutes after onlookers reported the fire, which initially spread from a nearby trash can. No injuries were reported, and the cause of the fire is still under investigation by the UCSB Fire Marshal.

Upon arrival, police quickly established a perimeter around the scene to hold back a gathering crowd of onlookers. According to Fire Department spokesperson Vince Agapito, the fire began with an explosion and then spread to an adjacent Nissan Sentra and Honda Accord.

“[The Rav4] was fully involved when firefighters arrived on the scene. At that point, the fire was beginning to impinge upon a second car,” Agapito said. “[The second car] suffered moderate damage from the fire from exposure to the fire of the first vehicle and the third vehicle had very light damage.”

UCPD Sgt. Dave Millard said high winds caused the fire to spread to adjacent cars, but the original source of the trash can fire is still unknown.

First-year psychology major Ryan O’Neil said he witnessed the entire event from a bench near Campbell Hall. According to O’Neil, emergency personnel were on the scene within approximately five minutes after the fire started.

“First, we heard a pop. We got up and the car was on fire. The fire went on for about a minute by the time it was mostly smoke,” O’Neil said. “The firefighters had all moved in at this point. Then probably three to five minutes after it started, there was a fireball like mushroom type of thing that went as high as the trees and all the firefighters backed off. 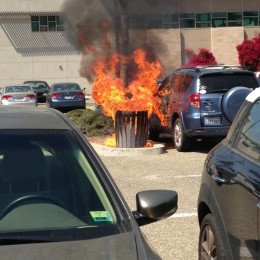 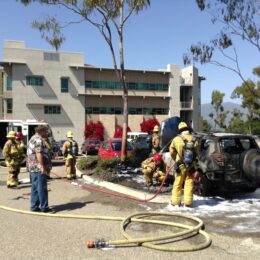 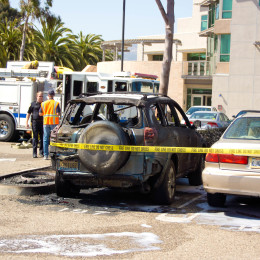 Fire sparked on campus yesterday afternoon, between Campbell Hall and Mosher Alumni House, originating at a trash can and spreading to cars parked in the parking lot.