During Wednesday’s Associated Students Senate meeting, Senators unanimously passed a resolution that calls for divestment of UC funds from the prison industrial complex and addressed issues of climate within the Senate during the public forum.

Several people spoke at the public forum to address issues arising between senators and executive officers. The ongoing elections process, along with some recently contentious meetings, have contributed to increasingly negative feelings between senators and led speakers to address events and actions that bothered them within the Senate.

On-campus Senator Kevin Rudolph read a letter during the public forum condemning the actions of another unnamed senator, citing tweets in which the senator allegedly spoke disrespectfully toward colleagues and accused the senator of missing last week’s meeting for campaigning reasons.

“Senators attacking other senators and posting public statements during the Senate meetings that both undermine and attack the process … should be deemed as unacceptable behavior for an elected official of the student body,” Rudolph said. “I ask if this behavior not changed, that the Internal Vice President puts the Senator’s removal on the agenda.”

Off-campus Senator Kaitlyn Christianson addressed the public forum as well, and said such accusations reflected party politics and should be let go.

“I just feel like we focus on petty stuff so much … and I really hope that we can just move on,” Christianson said. “This is obviously about parties and it happens on both sides, and it’s really stupid.”

Internal Vice President Mayra Segovia also spoke during the public forum and aimed to clear up some accusations that have been made toward executive officers, asking that the senators respect the effort that she puts into her job.

“Accusations [including] how execs have been spending their money or that the association is corrupt, I personally … hate it, actually, when people are making allegations like that … because I feel like it is undermining the work of the people that have actually been doing really great things,” Segovia said. “I just hold myself to a higher standard, and I hope you all hold me to that standard, too. I hope I’m not failing you.”

After the tense public forum was over, the senators passed a resolution supporting A.S. President Sophia Armen’s invitation to the UC Regents to hold a regent meeting on the UCSB campus, as well as a resolution to divest from companies that profit from the prison industrial complex.

Though there was some confusion around a statistic that one senator argued was misleading in the prison divestment resolution, the senators ultimately passed the resolution unanimously.

On-campus Senator Miya Sommers, who contributed to the resolution, said the prison industrial complex contributes to institutional racism within our society.

“This is just really important because, again, the prison industrial complex is very disastrous for the functioning of our society,” Sommers said. “People of color are over-incarcerated … and this is, sort of, a new form of racial prejudice.”

“White people are three times more likely to have drugs on them, or to be using illegal drugs … but people of color, specifically black people, are four times more likely to be searched on suspicion of having drugs,” Tajsar said. “I think the statistics speak for themselves.”

During next week’s meeting, the senators will consider the Finance Board budget for the 2013-14 school year. 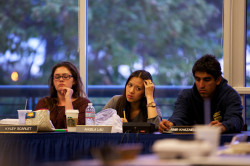 During Wednesday’s public forum, A.S. Senators unanimously passed legislation to divest from financial involvement with the prison industrial complex. They also debated intra-senate conflicts as well as a resolution to hold a UC Regents meeting at UCSB.