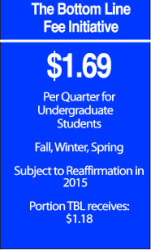 Next week’s Associated Students elections ballot will include a proposal for a $1.69 per quarter student lock-in fee in support of The Bottom Line, A.S.’s weekly campus newspaper.

The organization began campaigning for a student lock-in fee last year after a series of A.S. budget cuts led to a 73 percent reduction in funding for the newspaper, according to TBL Executive Managing Editor Annalise Domenighini. If passed, the money would go toward providing new equipment, more content and covering of travel costs. The fee, which is one of two new A.S. lock-in fees being voted on this election, would go into effect next fall and be subject to reaffirmation every two years.

Domenighini said the lock-in fee might also allow for more compensation for writers and editors to offset recent pay cuts.

According to A.S. Finance Board Chair Raul Martinez, TBL was allocated $12,000 from A.S. for honoraria earlier this year, and covers a large portion of its printing costs through grants the staff applied for. However, Martinez said some of these grants may not be available next year, and the paper needs a more stable source of funding in order to continue to cover costs.

Though the fee initiative failed to pass last year, Domenighini and Executive Content Editor Kelsey Gripenstraw said they remain confident it will pass this year, considering it fell short of the necessary 50 percent majority of 7,100 voters by only a couple hundred votes.

“Our promotional campaign … wasn’t as strong as previous years,” Domenighini said. “Last year we really ramped that up, so I think the number one factor that we were facing last year was just that people didn’t really know who we were, so they were probably voting for a lock-in fee [when] they didn’t really know, exactly, what the publication was going through.”

According to Gripenstraw, TBL’s weekly publication is not likely to change regardless of whether or not the initiative passes, but they may be forced to work with less if the measure fails. However, she said having more than one campus news source is important for the university and their readership.

“We value having multiple media sources on campus, because think about how the United States would be if there was one source of media. It would be insane,” Gripenstraw said. “Like, you can’t just rely on one news source for the entire school, especially with a school as huge as UCSB. So we’re here just to provide another voice.”

A version of this article appeared on page 10 of the April 18th, 2013’s print edition of the Nexus