The Daily Nexus
News
An Ancient Gaucho Looks Back: Part Three
April 17, 2013 at 5:00 am by Harvey Schechter

Harvey B. Schechter, class of 1947, recounts a few of his experiences attending Santa Barbara State College — the predecessor to UCSB. Schechter gives current Gauchos a look into what life was like back when tuition cost just pennies on the dollar and a football field still graced the grounds of our fine institution. Those were the days of rotary dials and men’s short-shorts, when vinyl records were the latest trend and when the Daily Nexus went by a different name — El Gaucho — which it would abandon after the infamous Bank of America burning in 1970.

Each year, we students without faculty participation put on a free variety stage show featuring music, singing, dancing and hilarious skits. In 1946, I was part of an eight-man chorus line wearing lipstick, scarves on our heads, padded bras, short shorts and tennis shoes while dancing to the tune of, “I Was Born On A Farm Down In Iowa.”

Fellow Gauchos, when our “chorus line” danced onto center stage from behind the curtain, the jam-packed college auditorium exploded with screams, laughter, applause and shouts. When we finished our dance routine, someone in the audience yelled “Encore” and we did the routine again with the same delicious result among the student audience.

Two of the students at that time were Marine sergeants, Fred Burrows and Martin Ortiz, both of whom took classes on campus in preparation for their discharge. Burrows, wearing a civilian coat, bow tie and eyeglasses, delivered a brilliant lecture on, “The Sex Life of the Amoeba.” It was so funny, the students seemed to greet every clever sentence with thunderous laughter.

I lived in Santa Barbara for five years, two at the ranch school and three in town, and I NEVER, EVER, HAD A KEY TO THE FRONT DOOR. Yes, we always closed the front door, but it was never locked. In fact, I never heard of dead bolts and door chains until I moved to Los Angeles to attend UCLA for grad school in 1947.

My parents and my young sister flew to Santa Barbara from New York in June 1947 to attend my graduation. In the rear of the large lot of the boarding house on West Islay Street where I lived with seven other male students, there was a small house which I rented for my parents.

After showing them the house, allowing them to unpack, etc., I started to leave when my father, of blessed memory, said, “Harvey, you didn’t give me the key.”  I said, “Dad, there is no key.”  He asked, “How do we lock the door when we leave?”  I said, “Dad, this is Santa Barbara, not Brooklyn. Just close the door and go. No one will bother your stuff.” And no one did.

That was Santa Barbara between 1941 and 1947. (If there appears to be a time discrepancy, it is due to the year I spent in Salinas between my freshman and sophomore years.)

DID YOU KNOW THE LAND ON WHICH UCSB SITS USED TO BE A U.S. MARINE CORPS AIR BASE?

It was on this Marine Corps Air Base that pilots were trained out over the ocean before they were sent to the Pacific for combat against the Japanese in World War II. After the war, when the federal government was downsizing the military, this land was sold to the University of California.

Tom Storke, a longtime close friend of then California Governor Earl Warren, and many prominent people in Santa Barbara, persuaded the Governor to convert Santa Barbara State College into a University of California campus. The state colleges sued the university to prevent it from taking over SBSC. Though the law suit failed, it led to a successful statewide vote to prevent the University of California from ever taking over any more state colleges.

WHO WAS TOM STORKE?

Every student on the UCSB campus is familiar with Storke Tower which dominates the campus landscape and every student probably knows about the Storke entrance and exit ramps on the 101 freeway just north of the campus, but do you Gauchos know who Tom Storke was?

Storke was the Pulitzer Prize winning publisher of the Santa Barbara News-Press who won this prestigious Prize in 1962 for a three-part series of articles in the News-Press exposing the John Birch Society as an extremist right wing organization. I personally am very proud of the part I played providing information about the Birch society to then Executive Editor Paul Veblen. At that time, I was the Anti-Defamation League’s Fact-Finding Director in  Los Angeles. One of my duties was monitoring hate and extremist groups. With enthusiasm, I shared data about the Birch Society with the News-Press.

Remember: Young Gauchos, I welcome your comments and questions.  Send them to: harvespie@sbcglobal.net 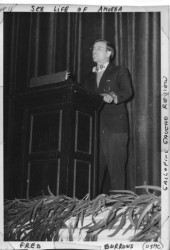 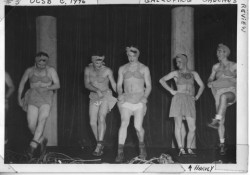 Ancient Gauchos get rowdy in drag (Pictured Above) while Sergeant Fred Burrows (Right) lectures fellow
students on “The Sex Life of the Amobea,” part of a production entitled “The Galloping Gaucho Review”.

A version of this article appeared on page 8 of the April 17th, 2013’s print edition of the Nexus