Just a week after pulling a tremendous upset over then No. 6 San Diego State, the No. 13 UCSB women’s water polo team will arrive in Irvine Saturday to face the new No. 6 team in the polls, conference rival UC Irvine.

The match will be the first of two weekend games for the Gauchos, who are scheduled to play Sunday at No. 9 Long Beach State. Santa Barbara, which sits at its highest ranking this season, rides a three-game winning streak heading into the road trip. UCSB is currently 19-10 overall and 2-2 in conference.

“We have nothing to lose,” Head Coach Cathy Neushul said. “We’re just going to do a lot of game prep, game by game, and see if we can’t come away with another couple wins.”

The outcome of this weekend’s matches will be pivotal for all teams involved, as the results will be implicated in the seeding for the upcoming Big West Tournament. Irvine, Long Beach and UCSB currently round out the two, four and five seeds in the conference, respectively.

Irvine will square off against Santa Barbara coming off a recent win over No. 14 Cal State Northridge. The Anteaters boast a defense that has limited opponents to just over six goals allowed per match, which has allowed Irvine to outscore its opponents by a total of 61 goals.

“We are going to make a few adjustments on offense,” Neushul said. “We’ve played them once already this year — we definitely have a plan to overcome their defensive plan.”

Santa Barbara last faced UC Irvine at the UCSD Triton Invitational in February, when the Gauchos lost in a close outcome, 14-10. This time around, UCSB will approach the Anteater Aquatic Complex having built more experience and team chemistry.

“We’ve had time to prepare and we tend to grow throughout the season,” Neushul said. “We can kind of prepare for a team rather than just prepare for water polo.”

Coming off five consecutive wins, Long Beach State will also provide a challenge for the Gauchos. The 49ers have held opponents to an average of 5.03 goals per game this season in addition to finding the net 11 times per game.

Santa Barbara has faced Long Beach once this season in a game where the Gauchos fell 9-7. Neushul expects the team’s past experiences will better prepare UCSB for the rematch.

“We are tailoring our plan from team to team now,” Neushul said. “We’re pretty confident going in.”

A win over either opponent this weekend would be a boon for UCSB in regards in the Big West seeding as the rankings figure to shuffle in the coming weeks.

“[A win this week] would be really, really good for the program,” Neushul said.

The Gauchos are scheduled to play their road matchups this weekend at noon both Saturday and Sunday. 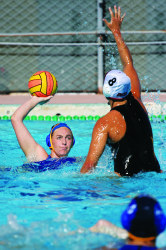