This weekend the UCSB women’s tennis team will wrap up its regular season with back-to-back matches against UC Davis and Pacific.

The Gauchos are coming off a 6-1 demolition of Cal Poly and will look to build even more momentum as they prepare for the Big West Tournament. The win over Cal Poly boosted the Gauchos’ overall record to 13-6 and the team is now ranked No. 69 in the Intercollegiate Tennis Association rankings.

“We really want to get ready for the Big West Tournament,” Head Coach Simon Thibodeau said. “This is the last sprint of the season and we have to be careful to make sure we are in top shape going into the tournament.”

The Gauchos will first play the Aggies this Saturday in Davis, California. The Aggies are 8-11 overall and coming off a close 4-3 defeat against the University of Hawaii.

After their match against UC Davis, the Gauchos will take on Pacific the following day. The Tigers share an identical 8-11 overall record, but have really struggled down the stretch, as they have lost nine out of their last 12 matches.

With UCSB having its best season in decades, Thibodeau believes that the key to success for the rest of the season is simply staying healthy.

“It’s a credit to us that we’ve stayed healthy all year,” Thibodeau said. “It’s not easy to play when you are injured.”

The Gauchos are on course to be the No. 3 seed in the Big West Tournament and the team is buzzing with confidence. In her fourth year playing for UCSB, senior Erica Cano is not taking the success the team has had for granted.

“As a senior, I haven’t seen a ton of success in our past years,” Cano said. “This is my last chance and I’m just glad that the girls are fighting for our team and for our school.”

If the Gauchos do indeed clinch the No. 3 seed for the tournament it would reflect tremendously on the job Thibodeau has done in his first season.

“He definitely has really high expectations of us,” Cano said of Thibodeau. “Even though we won 6-1 against Cal Poly he was talking about how we can improve things going into the Big West Tournament.”

UCSB will take on UC Davis this Saturday at 11 a.m. in Davis, California. They will then play Pacific on Sunday at 10 a.m. for their final regular season game. The team will then have an 11-day break before the Big West Tournament begins on April 25 in Indian Wells, California. 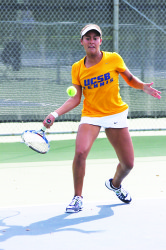