The Daily Nexus
Sports
Gauchos Look For Revenge at Pepperdine
April 9, 2013 at 4:07 am by Caleb Shoffner

Today, the UCSB baseball team heads to Malibu to take on Pepperdine University in a rematch of last Tuesday’s showdown where the Waves escaped with a 3-1 victory. The Gauchos are coming off a loss in their latest game Sunday, but took two out of three in the series against rival Cal Poly over the weekend.

“We have a chance to get some revenge,” Head Coach Andrew Checketts said. “Last time they got us pretty good here. I think we’re swinging the bats better than we were the last time they saw us. So hopefully that will show up [today] and it will turn into more offense when we play [Pepperdine].”

This time around Pepperdine will host the Gauchos as the two swap spots just one week after their first meeting. The Waves are in the final game of a four-game home stand today with the Gauchos after they took two out of three games against the University of Washington. Pepperdine is now 18-12 and 6-3 in the West Coast Conference, making them the top team in the league.

Junior starting pitcher Corey Miller earned himself WCC Player of the Week last week in his performance against Washington. Miller pitched 10 scoreless innings, struck out 10 and did not walk a single opposing batter. He, however, did not earn the win as the game was not decided until the 11th inning.

However, the last series showed promise for the Gauchos. Cal Poly is currently 4-2 in league play but the two losses came against the Gauchos, one defeat coming in a 13-2 drubbing on Saturday afternoon.

In the previous meeting last week, Pepperdine scored early and often, but after the fourth inning there was near silence as the pitchers for both sides got into ruts. The Waves scored on just the second at bat after a leadoff double by freshman second baseman Hutton Moyer set the table and later came in on an error.

Leading off the second inning, the Waves’ junior left fielder Chris Amezquita homered to take a 2-0 lead. The Gauchos managed a run in the bottom of the third, but the Waves answered back in the top of the fourth before the Gaucho bullpen pitched five scoreless innings.

The Gauchos’ bats will look to stay hot, coming off a strong offensive weekend. Santa Barbara outscored Cal Poly 23-11 over the course of three games.

Sophomore center fielder Cameron Newell, currently one of the hottest hitters in any lineup, has now hit safely in nine straight games dating back to March 24 at Cal Poly. Of the nine games, four were multi-hit showings and he has scored eight runs and driven in six over that span.

Sophomore second baseman Woody Woodward is working on his own modest four-game hitting streak dating back to the first game against Pepperdine. Over the course of the streak, he has hit .529 with a big 4-5 game on Saturday.

Today’s game is set to take place at 3 p.m. at Eddy D. Field Stadium in Malibu.

A version of this article appeared on page 10 of April 9, 2013’s print edition of the Nexus. 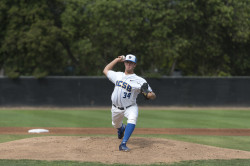