Open beaches would break precedent of party-preventative closures instituted in 2009.

As of yesterday, Santa Barbara County administration has not yet reached a decision on whether beach closures that are usually in effect during the start of Spring Quarter will be implemented this weekend, according to Isla Vista Foot Patrol Lt. Ray Vuillemainroy.

If officials decide to keep I.V.’s coastal waters open, it will mark the first time the beach will be open the first weekend of Spring Quarter since an estimated 12,000 beach-goers stormed the beaches during Floatopia 2009, resulting in numerous medical emergencies and long-term environmental consequences. As a result, Santa Barbara County began barring beach access for consecutive weekends in April beginning in 2010, and Floatopia henceforth became Del-topia, with the former beach gathering now relegated to Del Playa Drive.

According to Vuillemainroy, while the closure is still under evaluation, Floatopia beach festivities have caused significant issues with emergency response in years past due to limitations of beach access points.

Associated Students External Vice President of Local Affairs Rhandy Siordia said since 2010, IVFP has worked in accordance with Santa Barbara County regulations to alleviate the detrimental effects of the event by bulking up patrols and enforcing the beach barricade.

Siordia, who is working closely with county officials, said he doubts they will allow the beaches along the ocean side of DP to remain open.

“If I were betting here, I’d say they’re closing the beaches again,” Siordia said. “If somebody were to get injured down there, which is likely because of all the drinking and because of the water, then its impossible to get medical vehicles and medical personnel down there to get somebody transported away.”

The days of the first Floatopia trace back to 2004, when a small collection of students gathered on the beaches alongside DP to engage in drinking festivities and float along the ocean waters in inflatable rafts. Between then and 2008, the event attracted increasingly larger crowds of students each year but had still not reached its fullest extent.

UCSB alum and former Nexus editor-in-chief Nick Dürnhöfer said Floatopia began to change after the 2008 event, evolving from a simple beach party during Spring Quarter to a huge event attracting thousands of out-of-towners.

“Something happened between 2008 and 2009, and it just grew to a capacity that the county couldn’t deal with,” Dürnhöfer said. “It went from a lazy, goofy day at the beach to looking like an Isla Vista Halloween on the beach.”

The Floatopia of 2009 drew in large crowds of non-local college students and other party-goers that far surpassed the levels seen in previous years, according to UCSB alum Lexi Pandell, former managing editor of the Nexus.

“When you showed up, there was literally traffic to get on the beach,” Pandell said. “It took forever to get on the beach because the stairways were so blocked up. It was just people in floats everywhere — just thousands of people.”

The density of crowds, combined with a potentially dangerous mix of alcohol consumption and water activities, left students vulnerable to potentially fatal accidents, according to Pandell.

“Everyone was drunk and everyone was falling off floats into the water, and once you actually got out past the break, there’s just tons of kelp and there’s just floats everywhere,” Pandell said. “So if somebody had been drunk and fallen out, they could’ve easily gotten caught in the kelp or got caught under the raft and drowned.”

Some students were spotted propelling themselves from residences along DP onto the beaches, resulting in a number of cliff falls, Pandell said.

Santa Barbara resident and former UCSB employee Elspeth Collins said the environmental impact of the event extended to the communities of Carpinteria and Oxnard, as Floatopia pollution turned up in the waters of these nearby beaches. “It may have been fun but it was not planned well, and it really gave Santa Barbara such a bad reputation. We have these students going rampant on the beach and littering the whole state, and it did cost,” Collins said. “A lot of people were hurt and…nobody bothered to organize it or apply for a permit to do that.”

The massive turnout of the event also spawned several copycat events at colleges across the state — including Cal Poly’s “SLO-topia” and Floatopia San Diego. However, like the original, these events were often quickly contained by respective local authorities.

“There’s already Halloween in Isla Vista, and Halloween is just such a huge cost to the county,” Pandell said. “I kind of think they thought ‘Well, this tradition is new. It hasn’t been around for decades; maybe we can just nip it in the bud, and it’ll go away.’”

However, the measures taken by county officials are not entirely unwarranted, according to Dürnhöfer.

“The county should be more open to working with students on these issues, but the students really need to provide a solid plan to show they can create a safe and well-contained Floatopia that includes proper clean-up,” Dürnhöfer said. “Otherwise, you can’t blame the county for not wanting to waste resources on a Spring Break party that it did not sign up for or benefit from.”

But for Pandell, the experience of Floatopia 2009 will always remain a memorable, even if sometimes environmentally and physically harmful, experience.

“It was incredible and I totally understand why it could never happen again. But for those of us that were there, it was mind-blowing and totally amazing and so much fun, but completely dangerous,” Pandell said. “And I am shocked that nobody died. Even while I was there and enjoying myself, I was looking around like, ‘How are people okay right now?’” 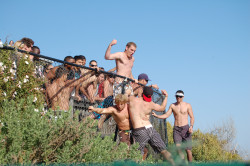 A drunken brawl that broke out during Floatopia 2009. Such incidents, as well as the environmental damage caused to the beaches and oceans, prompted authorities to shut down the event in recent years.

A version of this article appeared on page 8 of April 3rd, 2013’s print edition of the Nexus