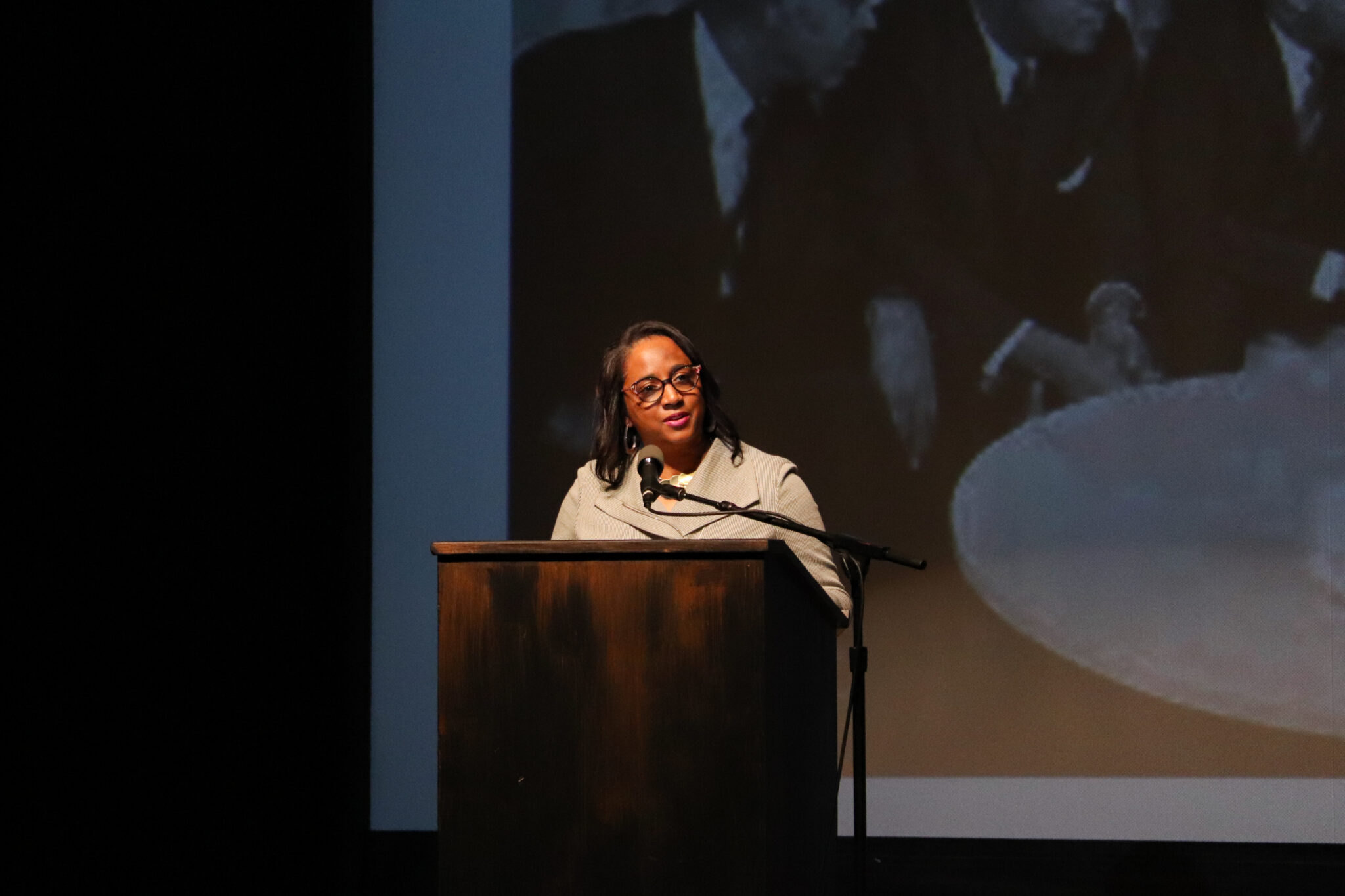 Berry focused her keynote speech on the importance of servitude in leadership with the program’s central theme. Liam Goodin / Daily Nexus

The program included several speakers, musical performances, awards ceremonies and a final keynote presentation from UC Santa Barbara Michael Douglas Dean of Humanities and Fine Arts Daina Ramey Berry. This year’s overarching theme was “Life’s most persistent and urgent question is, ‘What are you doing for others?’” a quote from King.

“King reminds us that at the end of your life, the question will be, ‘What did you do for others?’” Berry said during her presentation. “This is the breadth of life. There is nothing greater than doing something for others.”’

The original Monday schedule was cut to just the presentation in response to weather conditions in Santa Barbara County and originally included a morning program with guest speaker Edward Song and a Unity March on State Street prior to the presentation.

The event took place at 11 a.m. and concluded the committee’s program schedule, which began on Jan. 12, when the group hosted the UCSB Eternal Flame “Walk With Us” silent march at Buchanan courtyard. This march was a part of Santa Barbara Martin Luther King Jr. (MLKSB) Committee’s event schedule for the holiday, with a Jan. 13 Friday service at the Congregation B’nai B’rith synagogue, a “Day of Service” on Jan. 14 and a Sunday service on Jan. 15.

MLKSB President E. onja Brown then introduced Congressman Salud Carbajal, who spoke to ongoing legislative progress in racial equity, including the passage of the Emmett Till Anti-Lynching Act.

“Please know that I will continue to fight for justice in the United States Congress, sharing with me lessons from my friend and colleague, the late John Lewis. Together, we can move mountains,” Carbajal said.

Following Carbajal, State Senator Monique Limón spoke about the ideals of justice and equality King espoused and her commitment to upholding them.

“In recognizing and reflecting and celebrating his life, we pay tribute to his principles of love, justice, inclusion and respect,” Limón said.

“While we certainly have not fulfilled [King’s] vision of what our country could and should, I believe that his legacy and dream live on and must be kept alive,” Rowse said.

Highlighting the legacy of Martin Luther King Jr., Berry focused her keynote speech on the importance of servitude in leadership with the program’s central theme.

She illustrated the question to three dimensions: length, defined by self-acceptance and inner power; breadth, based on concern for welfare of others; and height, highlighting the reach towards a higher being.

“I want to focus on the breadth because that’s talking about what we do for others,” Berry said. “King teaches us that, quote: ‘We have not yet to live until we can rise above it, the narrow confines of our own individual concerns … ’ What will happen to humanity if I don’t help?”

She emphasized that a major aspect of King’s legacy is the importance of servitude and efforts made to help others.

“As servant leaders, think about the impact of doing good for others,” Berry continued. “Do it just because. Lend a neighbor or a stranger a hand. Give to the homeless … Think about how others and how you can make their lives better, or just make them smile.”

Addressing this message to the Santa Barbara community, Berry encouraged the audience to perform random acts of kindness to make the city a better place.

“I hope that King inspires you to have a three-dimensional life,” she said. “I call for the city of Santa Barbara to do more for others.”