UC Santa Barbara students and community members marched in remembrance of Martin Luther King Jr. on Thursday with the return of the annual “Walk With Us” celebration. 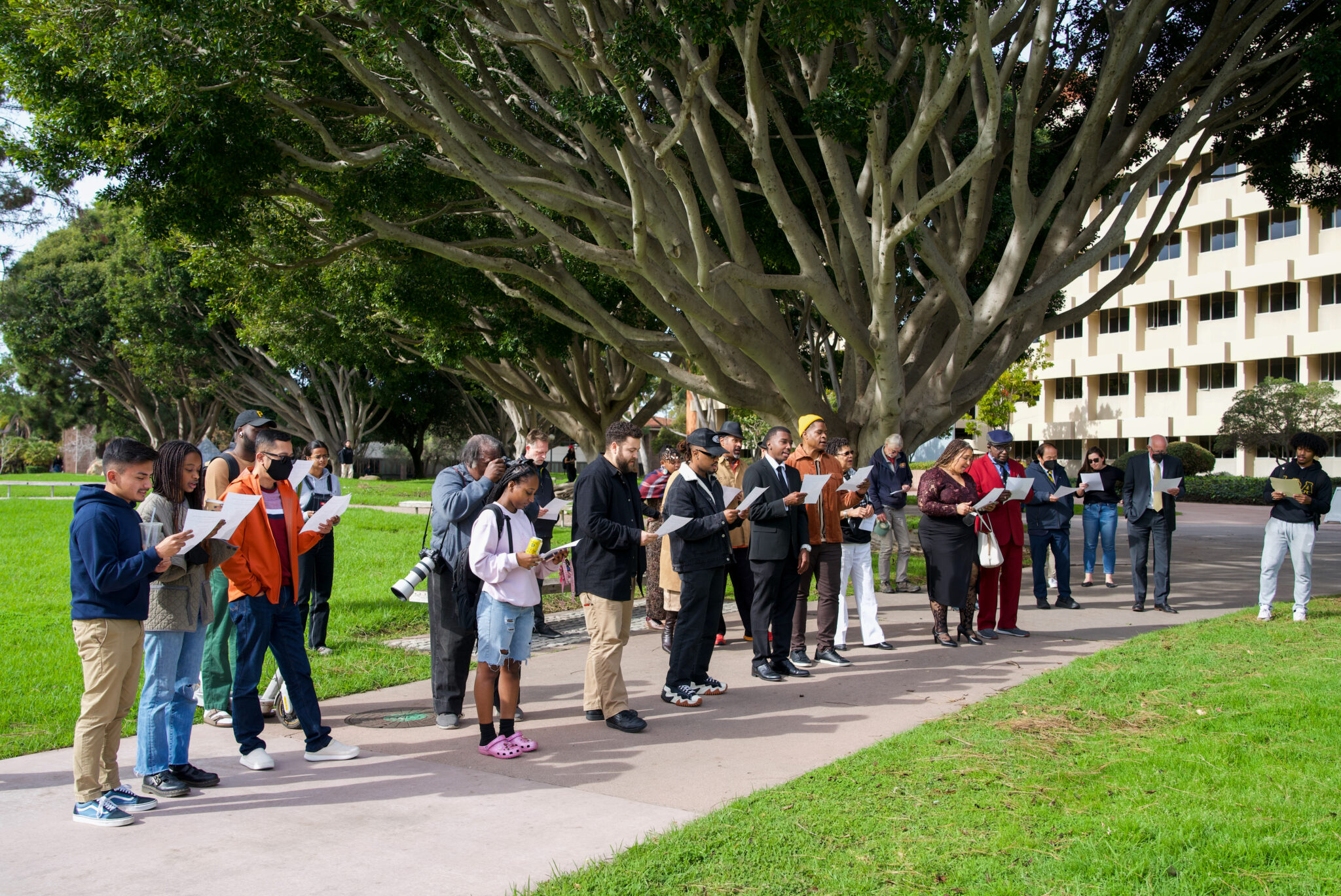 The group then marched silently from the Eternal Flame monument to the MultiCultural Center (MCC) at UCSB. Justin Tse / Daily Nexus

The march, honoring the life and legacy of Martin Luther King Jr., began at the campus’ Eternal Flame monument, through sects of campus like the Arbor area and North Hall, and ended at the MultiCultural Center.

The program this year took place on Thursday instead of the day of the Monday holiday to ensure turnout for the MLK SB Collective walk on Monday in Goleta, held to commemorate Martin Luther King Jr.’s legacy, according to Educational Opportunity Program Director Aaron Jones.

The mic was passed off to UCSB alum, former Alpha Phi Alpha Fraternity member and Office of Black Student Development Advocacy Counselor Mekhi Mitchell, who reflected on the monument as a symbol of Black student progress.

“I think it’s important for us to remember that no matter what it looks like, no matter how things may go, no matter if the progress seems like it’s going slower, you have to continue to keep that fire within us,” Mitchell said. “The symbolism of [the eternal flame] is it’s always burning. It’s always going. It’s always staying lit. That’s something that resonates with me, and I continue to fight as an advocacy counselor on this campus.”

“We’ve been pitted against each other; we’ve been forced to take a hierarchy of nations that have led to the oppression of certain social groups and racial groups,” George said. “What Dr. King was saying there for me was that we have to take a step out of the social conditioning that we’ve all been forced into, and see each other as humans, as brothers, as one.”

MLK SB Collective member E. Onja Brown closed out the speaker lineup, highlighting the efforts made by Black students in the 1960s for various demands.

“Those demands were met [with] many African American programs, EOP, Black Studies, Black Studies Research,” Brown said. “Keep supporting these programs on campus [and be] supportive of the eternal flame.”

The group then marched silently from the Eternal Flame monument to the MultiCultural Center (MCC) at UCSB. The program served South Coast Deli sandwiches to the participants in the MCC.

“[It’s important to] give back to the next generation,” Washington said. “A lot of the time, a lot of this history will get lost in time … Things like the monument allows us to look at that and remember.”

“You’re getting together in a silent walk to bring the community together to share the history and values, and you attribute the honor, the memory, the legacy of the work,” Aaron Jones said. “There’s a lot of diversity, a lot of breadth and complexity to this man that we revere and have the holiday for.”

Brown indicated hope that the current work to celebrate Martin Luther King Jr. and general Black progress will be passed down to the youth and the next generation.

“I’m hoping that the young people will take up the gauntlet of what we started and they’ll carry it forward,” Brown said.

“[Martin Luther King Jr.] was a prophet; He wasn’t really just a person like us,” she continued. “He had a passion and he had a purpose, and he felt like his passion and his purpose was to continue to mobilize people and get people to support each other no matter who the person was.”