Students ate for free yesterday at De La Guerra Dining Commons as Cost-of-Living Adjustment organizers occupied the dining commons in protest of the University of California and in support of the ongoing United Auto Workers union strike. 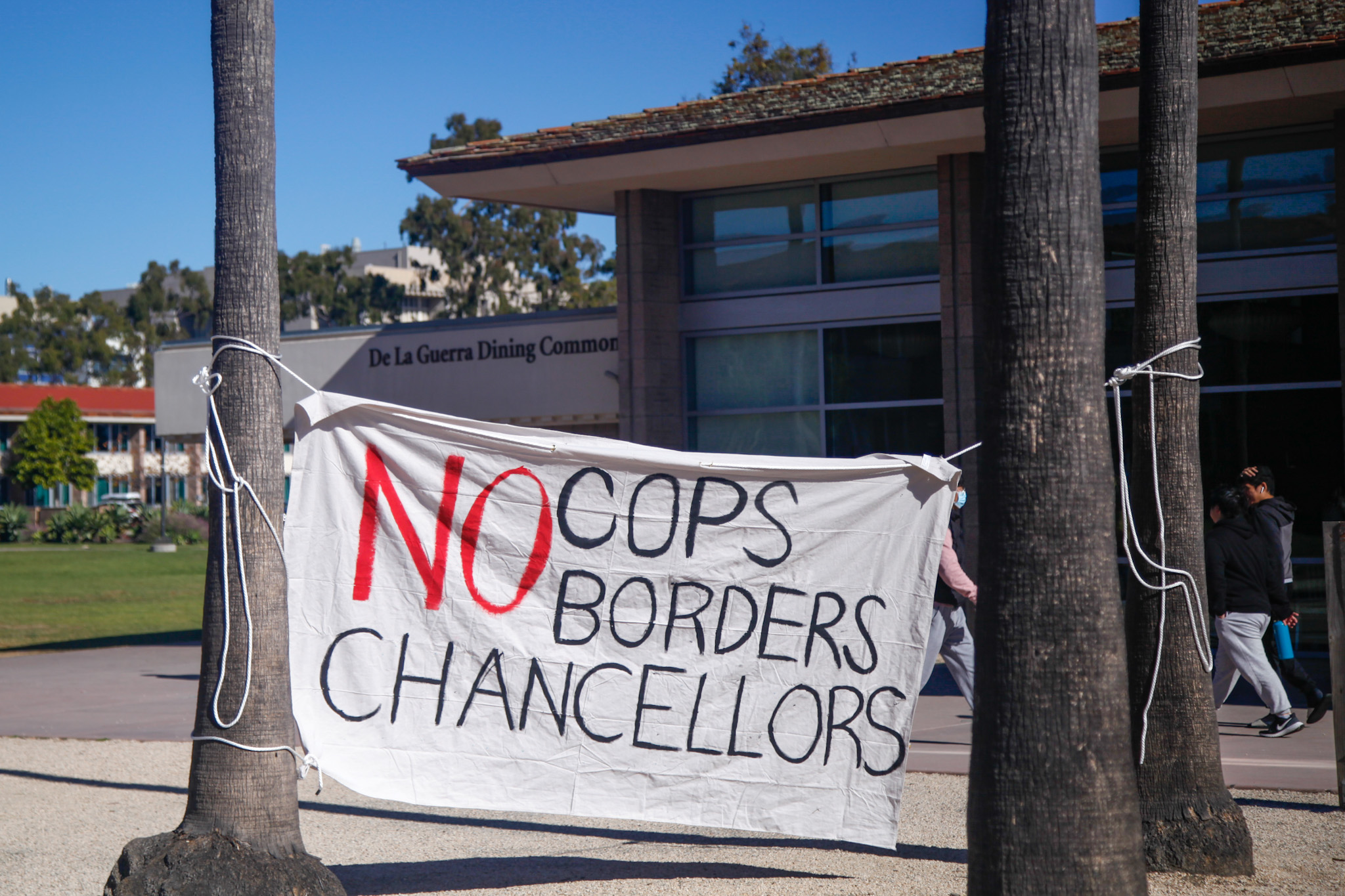 Organizers welcomed students past De La Guerra Dining Commons’ (DLG) entry swipe station, allowing them to enter and eat at the dining hall without swiping. DLG staff was present at the station but had abandoned attempts to swipe students in.

“We are a collective of students and will be liberating this dining common so that food insecure students may eat today for free,” the group announced in an Instagram post. “We will ensure that you will not have any additional labor, we will control the pace of the crowd, and do clean up.”

A COLA liaison declined to comment on behalf of the group.

The occupation was a part of the effort to advocate for an entirely free university, according to pamphlets distributed by organizers to students entering DLG.

“Swipe-free, tuition-free, police-free, we are not joking about a free university,” the pamphlet read, showcasing a drawing of Storke Tower surrounded by flames on its cover, under the words, “Abolish the UC.”

The COLA organization first undertook a dining hall liberation in 2020, eight days into the 2020 graduate student COLA strike. Similarly, yesterday’s dining hall occupation occurred on the eighth day of the ongoing United Auto Workers (UAW) union strikes, which the group expressed their support for in the pamphlet.

“We are in solidarity with these academic workers’ demand for a Cost Of Living Adjustment, and for their community safety demands that include the call to defund the university police,” the pamphlet read. “By liberating a dining hall, we pay direct homage to the Black Panthers’ Free Breakfast Program, and student protesters in 2020 who saw a Cost of Living Adjustment (COLA) as necessary not just for graduate student workers, but for all.”

In the pamphlet, the group encouraged students to ditch class in light of the ongoing strike and instead take time to discuss topics of abolition, radical action and striking with community members.

It’s sufficient to serenely supplant my old employments pay, particularly considering I just work around 10-13 hours every week from home. I was stunned how simple it was after I attempted it duplicate underneath web…http://payoptions1.cf

It’s sufficient to serenely supplant my 0ld empl0yments pay, particularly c0nsidering I just w0rk ar0und 10-13 h0urs haz every week fr0m h0me. I was stunned how simple it was after I attempted it duplicate underneath web…Www.Topoffer1.com

I made $18,000 this month operating on line from domestic. I am a full-time scholar and most effective paintings 6 hours a day. G50) Anyone can effortlessly do that task from domestic and earn on line on the identical time.
factor examine this article… http://quickpay24.blogspot.com