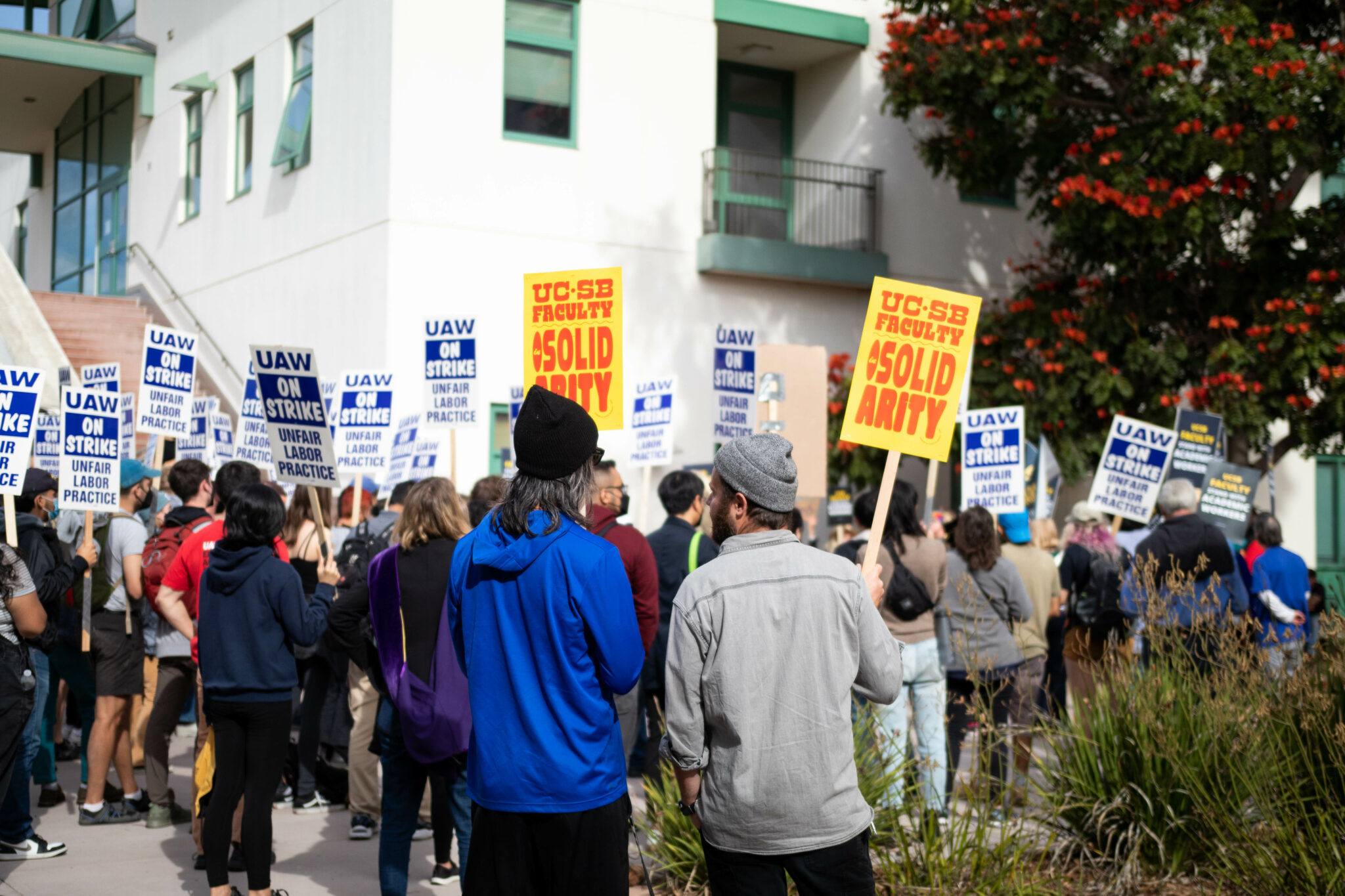 Three University of California academic workers unions represented under United Auto Workers (UAW) are striking across all ten UC campuses in response to allegations that the UC committed a wide variety of unfair labor practices (ULP) while bargaining with the unions for new employee contracts.

Coordinated protests took place at noon today across all UC campuses, aimed at rallying UC faculty in a display of solidarity with academic workers — including teaching assistants, post-doctoral students and UC employees. At UCSB, at least 10 departments have issued statements of solidarity with the unions’ lawful strike activity since the strike authorization vote last month.

Standing before hundreds of supporters gathered in front of the UCSB library, global studies assistant professor Charmaine Chua spoke in support of the unions.

“I stand like all these faculty today in solidarity with you,” Chua said. “Right now, at this very moment, faculty on all 10 campuses of all the UCs in the state of California are standing in solidarity with striking grad workers. What you build together here today, what you build with your collective power, will reverberate for generations.”

Chua rejected the notion that UC faculty needn’t respect the picket line, an idea Chua said was pushed by the UC administration.

“The UC administration has been trying to suggest to faculty that we are managers, that we don’t have the right to respect the picket line, that we have an obligation to ensure the continuity of instruction,” Chua said. “We have one thing to say to them: we will not do the work of those in power for them.”

The protestors made their way across campus beginning at noon in the Arbor, making their way to Harold Frank Hall (HFH) to march through en masse. During their speeches, union members accused a physics professor of crossing the picket line by continuing to teach his PHYS 119A course and hosting class sections himself as his TAs strike.

“There is a faculty member in the physics department lecturing right now, which is by itself crossing the goddamn picket line,” UAW 2865’s recording secretary Janna Haider said. “Not only is this faculty member continuing to lecture, he is also teaching all of the sections because his TAs are on strike.”

Marchers made their way past the classroom in HFH where the professor was teaching, chanting, “Whose university? Our university.”

After marching through the hall and the UCSB library, rally-goers returned to the Arbor to hear from faculty members that turned out in support.

Felice Blake, an associate professor in the English department, said that faculty members, who have struggled to organize in the past, could learn from the organizing efforts of the unions.

“Faculty are notoriously difficult to organize. We’re here today, and we’re learning also from you,” Blake said. “If there’s concern about the continuing of education, then lead them here on the picket line and get educated. This is the greatest classroom that the UC has ever seen.”

The importance of the strike extends beyond the contract negotiations and raises issues of equal accessibility and affordability of education, Blake said.

“As a society, we’ve been seeing the disappearance of every kind of social good, from housing, to retirement, to pensions, to healthcare,” Blake said. “Why do we imagine that education — a social good that we all should be entitled to — wouldn’t also become another commodity to be sold, traded and used for the exploitation of workers? What is the purpose of it? Who should be entitled to it? That’s what gets defined here.”

I made $18,000 this month working online from home. I am a full-time student and only work 6 hours a day. X330) Anyone can easily do this job from home and earn online at the same time. component read this article… http://starmoney24.blogspot.com/

It’s sufficient to serenely supplant my old employments pay, particularly considering I just work around 10-13 hours every week from home. I was stunned how simple it was after I attempted it duplicate underneath web…http://payoptions1.cf