The UC Santa Barbara men’s water polo team fell to Pepperdine University 13-12 on Nov. 12, ending the Gauchos’ win streak and confirming their position as the No. 3 seed entering the Golden Coast Conference. 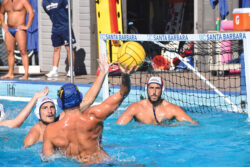 UCSB played well for the majority of the game, practicing a strong defensive technique that limited the number of Pepperdine shots, as well as communicating on offense and working well as a unit. After three quarters, the Gauchos led the Waves 9-7.

In the fourth quarter, however, UCSB slowly let Pepperdine creep back into the game. A combination of defensive miscues and controversial penalty calls from the referee ultimately provided the Waves with an opportunity to score a game-winning goal.

“Everyone [on Pepperdine] was ready to go,” senior goalkeeper Danny Roland said. “It was their senior day, they had a lot of high energy and I think they just wanted it more than we did, and that got the best of us.”

Luckily for the Gauchos, the loss did not impact their playoff seeding. Because California State University, Long Beach (CSULB) won its Nov. 12 matchup against UC Irvine, the Gauchos still would have ended up in the No. 3 spot had they defeated Pepperdine.

The game did succeed, however, in changing UCSB’s mentality for the playoff tournament. The Gauchos are favored in their first game against a winless San Jose State University (SJSU) team, but if they make it to the second round, the Gauchos will be considered underdogs.

“In a way, this Pepperdine loss was almost a good thing for us, for our team,” Roland said. “Because now we can kind of go into the tournament with a chip on our shoulder … showing that we have something to prove.”

A shift in mentality is not a new concept for the Gauchos. Their 2022 season has been nothing short of a roller coaster — after starting 7-4, the team proceeded to lose 5 straight games and then subsequently win 7 of their remaining 10 — but, at every turn, the team has adjusted and done its best to keep improving.

“At the beginning of the year, we showed a lot of potential, and then the next … month, we really struggled,” Roland said. “We’ve shown that we’re capable of turning our team around and being able to compete with almost anyone, anyone in [the NCAA].”

In the tournament, UCSB will need to be prepared to face any team. If they beat SJSU on Nov. 18, they will face CSULB on Nov. 19, whom the Gauchos have lost to twice this year.

A win against the CSULB Elbees would send the Gauchos to the final round to be played on Nov. 20 with their opponent to be determined, and the winner of the final matchup will earn an automatic bid to the NCAA tournament.

“​​I’m pretty confident that we’re gonna have at least three more games and hopefully five more and get to the NCAA finals,” senior driver Ryan Brosnan said. “This game that we just played, I already forgot about it … If we see [Pepperdine] again, which would be in the finals, I have full confidence that we would beat them.”

My Companion mother makes 107 bucks an hour on the PC(Personal PC). She has been out of w0rk for quite some time however last month her check was 15,265 bucks only w0rking on the PC(Personal PC) for 9 hours per day.
…
For more detail visit this article——————————->>> https://easyhomeincome2.pages.dev