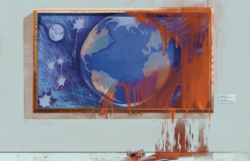 “Mona Lisa,” “Sunflowers,” “Meules” and “Girl with a Pearl Earring.” Famous paintings — and recent targets of glue, tomato soup, mashed potatoes and cake in protests by climate organizations. These protests have made them the center of a huge amount of media attention victimizing these artworks while ignoring the motivation of the protests. The demonstrators are advocating for action toward the climate crisis, but their message seems to have gone over everyone’s heads.

While these demonstrators have gone viral, these protests haven’t been entirely effective at raising awareness toward their intended cause, mainly due to the misdirected attention and passivity of the public.

When the “Mona Lisa” was smeared with cake in May of this year, it seemed like an isolated incident. However, after a climate awareness group threw cans of tomato soup at Van Gogh’s “Sunflowers” in the National Gallery in early October, it became evident that wasn’t the case. In the same month, activists threw mashed potatoes at Monet’s “Meules” and glued their heads to Vermeer’s “Girl with a Pearl Earring.”

Apart from the “Mona Lisa” cake mash, all other protests were orchestrated by Just Stop Oil, a climate organization across the U.K. and Europe who say they want to use nonviolent resistance to get the government to stop the production of fossil fuels.

One of the protesters who threw mashed potatoes at Monet’s “Meules” in Germany explained that it was designed as a “wake-up call” to grab people’s attention and make them listen to the climate catastrophe. In a video of the protest, one of the demonstrators implores, “This painting is not going to be worth anything if we have to fight over food. When will you finally start to listen? When will you finally start to listen and stop business as usual?”

News articles, videos, pictures and memes of these protests immediately started circulating internationally. Reactions have been varied — some support the activists, others feel like they’re going too far and a mass majority are horrified over the potential destruction of priceless works of art. The Atlantic deemed these protests “embarrassing,” saying that organizations like Just Stop Oil wheedle people for not caring enough about the climate crisis.

While these protests have been great attention-grabbers, the attention garnered has been too focused on the paintings and not the cause behind the destruction. Pro: These extreme demonstrations get attention. Phoebe Plummer, member of Just Stop Oil who was part of the Van Gogh demonstration, said that they chose “Sunflowers” “because of its notoriety.” Plummer knew that what Just Stop Oil was doing would get a reaction from people, even if that reaction was shock and horror at the painting’s destruction. People usually try to attract attention in positive ways, so the protestors openly seeking a negative reaction is indicative of their understanding that they need something drastic to get the public’s attention and of their desperation to achieve said attention in any way.

Con: The attention that these protestors have received either perceives them negatively or is completely fixated on the destruction of the artwork. Most of the public reaction has varied from “serious concern” for the potential destruction of the paintings to arguing that the food use is wasteful. People have also been annoyed with the disturbance caused, seeing it as an interruption to the gallery-viewing experience for other patrons.

The public focus on the artwork itself and their opposition to the protestors for their “disruptiveness” were two things I found interesting about these protests. Both aspects of these protests can speak to something larger about demonstrations and their effectiveness today — how protestors have had to adopt bigger and bolder tactics in order to get attention. They also address the sense of nihilism which we seem to be adopting toward causes such as climate awareness.

Art has a long history as the centerpiece of demonstrations.

Art has a long history as the centerpiece of demonstrations. In 1914, Diego Velázquez’s “Rokeby Venus” was slashed by a woman protesting a fellow suffragette’s arrest. The “Mona Lisa,” one of the pieces that climate activists targeted, has been vandalized over five times in the past century. Similarly, protesting for climate awareness is nothing new. While this new trend of protests stands out in their technique, there’s nothing sudden about them. Climate activists have been demonstrating their desperation for people to understand the depth of the issue for a while.

In April of this year, American climate activist Wynn Bruce died after setting himself on fire outside the Supreme Court. A close friend stated that Bruce had been planning his self-immolation not as suicide but as a protest against climate change, calling it “a deeply fearless act of compassion to bring attention to climate crisis.” That same month, NASA scientist Peter Kalmus and three others chained themselves to the doors of a Chase Bank in Los Angeles, speaking to a crowd until they were arrested. JPMorgan Chase & Co. is the largest investor in fossil fuels of any other bank.

While self-immolation, vandalism and chaining oneself to buildings are all very different forms of protest, they attempt to convey the desperation that climate activists feel. The pushback that protestors experience  — the lack of care toward what they’re cautioning against — is only fueling that desperation and is what leads to these drastic forms of protest.

In an article for The Guardian,” George Monbiot asks, “How could we pay any less attention to polite objections by ‘respectable’ protesters to the destruction of the habitable planet?”

To me, the whole point of a protest is to be disruptive, to get eyes on what you’re saying. Protesting “properly” is an oxymoron. The people who bring up proper protest are the people that ‘end’ a debate by correcting your grammar. During the Black Lives Matter protests in 2020, the main way that opponents of the BLM movement would try to divert the narrative would be to condemn the protests for being violent or turning into riots — calling protestors “anarchists” and “thugs” — even though reports found that a majority of protests were peaceful. Critiquing tactics and arguing about propriety has been a constant counterargument to civil disobedience and civil rights movements.

Focusing on the disruptiveness of these protests is redundant because focusing on the palatability of demonstrations, as Monbiot claims, won’t make the public any more receptive to them. There’s a disjunction between the desire to achieve change and the desire to do so solely in a proper way. What happens when the “proper” way stops working?

The focus on the destruction of the artwork and the disruptive nature of these protests as opposed to the actual message speaks to a growing passiveness which people feel about the climate crisis. I understand why. Many of us have known about global warming for as long as we can remember, and whenever you turn on the news it’s hard to escape hearing about it, whether you’re watching an oil company’s stock points or the daily weather forecast. I’ve lived in Southern California my entire life, and I can’t remember a time before my mom’s warnings to not use the sink for long and to take shorter showers — or a summer without a heatwave.

It’s a crisis which feels like it’s never ending. On a major scale, no new laws are getting passed to change things, and fossil fuel companies only continue to rake in profits. That’s why people seem to have grown increasingly despondent to activism over the years. As the causes which demonstrators are fighting for only seem to grow more and more out of reach, the public stops expecting change.

The public’s apparent apathy is what causes demonstrators to turn to drastic measures to divert attention back to the issue. In doing so, protestors have shed light on our desensitization toward the climate crisis, something which urgently needs to change if we are going to start taking action toward a healthier planet. Fighting this nihilistic feeling needs to become a top priority, as it’s only when people care and are engaged that they start listening to what protesters are trying to get them to hear.

[Protestors] have shed light on our desensitization toward the climate crisis, something which urgently needs to change if we are going to start taking action toward a healthier planet.

As I’m writing, climate activists in Madrid have glued themselves to Goya’s “The Naked Maja” and “The Clothed Maja.” These protests are already losing momentum. I don’t know if I would have known about the Goya painting protests if I hadn’t already been researching this article.

Like the life cycle of a living thing, internet virality also waxes and wanes, and it seems as though these protests are becoming just another place on our 2022 bingo cards.

There is potential for change in both the public and the political discourse surrounding climate change. However, the former seems as though it’ll come far more rapidly than the latter. For legislative change, there needs to be less favoring toward private interests and the companies which are fueling the problem.

It’s hard to picture what exactly needs to happen to get people to become more engaged with social issues and protests. Still, I think it’s important when it comes to the climate crisis to think about what exactly despondency means. While it’s tempting to stick your head in the sand and try to just go on with your own life, we need to start shedding this feeling of nihilism and accepting the fact that the only way the world will improve is if we make it better. Instead of focusing on propriety and how demonstrators choose to protest, we need to think about why they’re speaking out about these issues and what we ourselves can do to address those problems.

Ashna Ahmed thinks that we need to be less apathetic when it comes to climate change.

My Companion mother makes 50 bucks an hour on the PC(Personal PC). She has been out of w0rk for quite some time however last month her check was 11,500 bucks only w0rking on the PC(Personal PC) for 9 hours per day.
For more detail visit this article.. https://part-time-work2.blogspot.com/

My Companion mother makes 105 bucks an hour on the PC(Personal PC). She has been out of w0rk for quite some time however last month her check was 15,265 bucks only w0rking on the PC(Personal PC) for 9 hours per day.
…
For more detail visit this article——————————->>> https://easyhomeincome2.pages.dev