The women’s team got off to winning ways on the road against Santa Clara University, taking them down 73-61. The men’s team opened their season in the Thunderdome, beating the San Francisco State Gators 75-59. 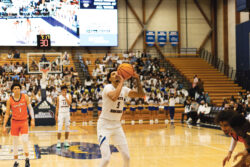 In the women’s matchup, the Gauchos got off to a slow start, picking up their first points of the game two minutes in, a 3-pointer from junior guard Anya Choice. The first quarter remained back and forth until the Gauchos were able to go on a 5-0 run to end the period up 18-14.

Following the second quarter, the third quarter produced much of the same results, as the Gauchos were able to end the quarter with a 59-43 lead which they would hold until the end of the game.

The performer of the night was Lane, who dominated in the paint, putting up a double-double with 17 points and 11 rebounds. Even more impressive was Lane picking up 7 offensive rebounds and shooting above 50% from the field.

Off the bench, sophomore point guard Callie Cooper had an impressive all-around performance, having a team high of 2 steals, along with 6 points, 5 rebounds and 4 assists.

The squad will take on Pepperdine next on Nov. 10 at home for Fansgiving.

As for the men’s team, they got off to a fast start in their matchup, going on an 11-0 run to start the game. Within the team’s first 9 points there were four different starters to score for each of the baskets.

At the end of the first half the Gauchos were in a tight contest, leading by only a score of 32-27.  At the 10-minute mark of the second half, the lead was cut to 56-53 in the Gauchos’ favor. With eight minutes and 30 seconds remaining in the second half, the Gauchos went on a much-needed run, and extended their lead to 68-57 with five minutes and 12 seconds remaining in the game. The Gauchos’ defense stepped up big in the end, allowing just 2 points in the closing five minutes of the game.

UC Berkeley transfer and graduate forward Andre Kelly started at the forward position and put on a dominant performance on the glass, securing 14 rebounds in the game.

Sophomore guard Cole Anderson is a player to look out for this season, putting up a game-high of 25 points to go with 50% shooting from the three-point line.

Returning starters, sophomore guard Ajay Mitchell and senior forward Miles Norris showed their experience on the court. Norris put up an efficient 21 points on 9-11 shooting. Mitchell had a rough shooting day going 3-10, but still had a major impact putting together a double-double with 10 assists and 10 points.

There will be room for improvement for the Gauchos as the bench only managed to score 4 points on 1-5 shooting. They will have a quick turnaround as they will take on the 1-0 Fresno State on Nov. 11 in Santa Cruz.