The Daily Nexus
News
Student leaders advocate for greater physical accessibility of UCSB campus
November 11, 2022 at 10:00 am by Asumi Shuda and Melea Maglalang

On-campus advocates for the disability justice movement are evaluating the UC Santa Barbara campus’ physical accessibility and working toward implementing better infrastructure to serve students with disabilities at the university. 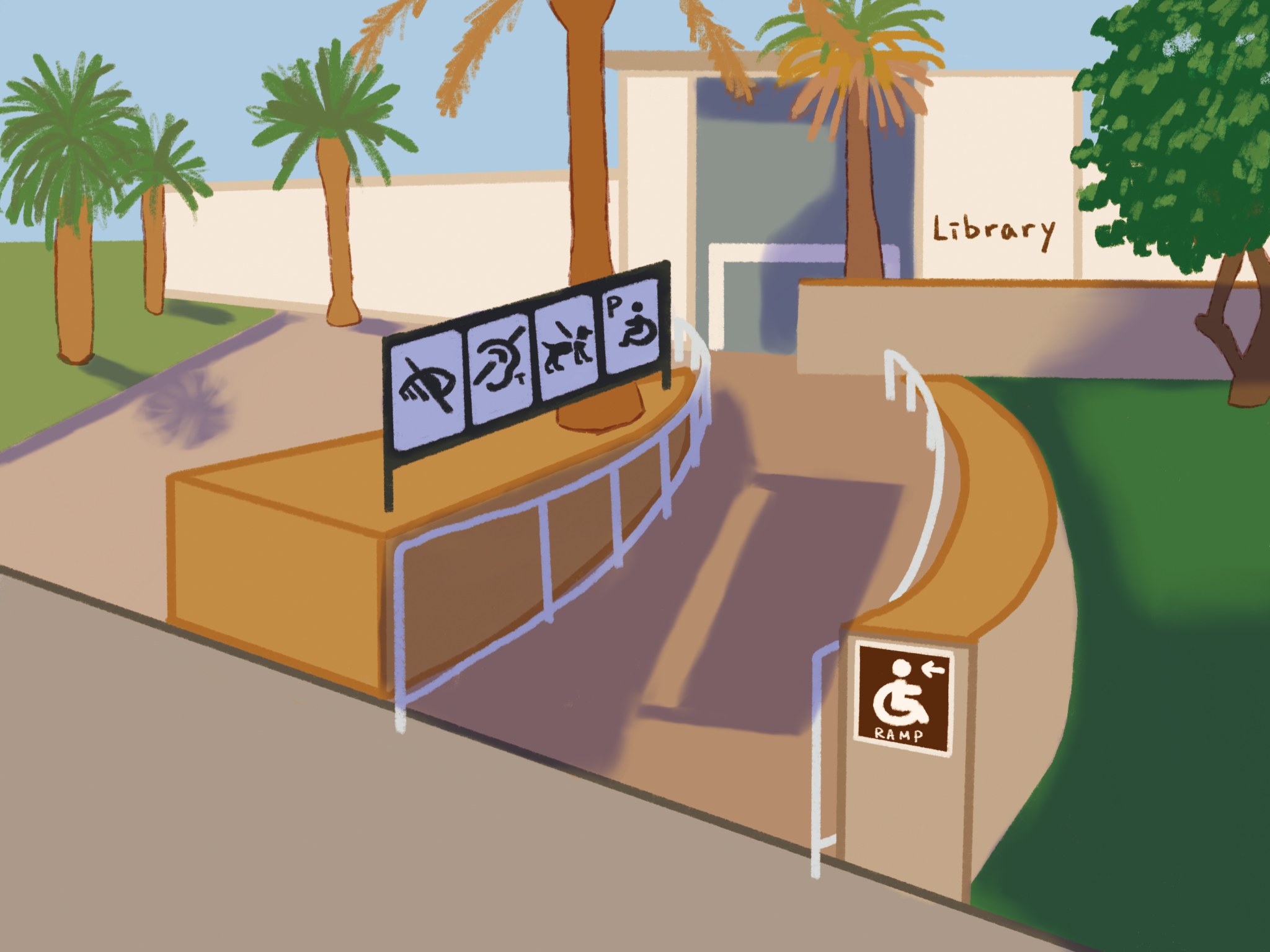 Following the completion of the Addition and Renovation Project in 2016, the UCSB Library is now fully up to date with ADA building standards. Ariel Lee / Daily Nexus

The 1990 Americans with Disabilities Act (ADA) prohibits discrimination against people with disabilities. To be in compliance with ADA law, UCSB is required to ensure that all of its programs, services and activities are usable in an equitable fashion, according to the UCSB ADA handbook.

However, UCSB’s guidelines “does not require that each of our existing facilities be accessible,” the handbook read.

The lack of accessibility requirements has resulted in insufficiencies in several campus buildings, presenting barriers to students with physical disabilities, multiple students with disabilities told the Nexus.

The university did not respond to multiple requests for comment on the accessibility of campus facilities.

Fourth-year sociology major and Commission of Disability Equality (C.O.D.E.) Co-Chair and External Affairs Coordinator Sophia Lee-Park said numerous facilities on campus are difficult to access — whether due to distance, narrow passageways or an inaccessible entryway — as a student with a physical disability who uses a wheelchair for mobility.

Lee-Park said she faced difficulty in accessing lecture halls during her time at UCSB, specifically speaking to her experience in having lectures in Lotte Lehmann Concert Hall, the Physics Building, Phelps Hall, Isla Vista Theater and South Hall.

“My first sociology class [was in I.V. Theater] and, in that class, when you go down the ramp, there’s a door in the way that leaves you in the dark,” Lee-Park said. “So you have to open the door, and then there’s no desk because there’s a stage.”

“And, sometimes, it’s not the room itself — it’s the furniture,” she continued. “I have an education class right now where the room is pretty big but they put a bunch of desks and chairs in there, so I have to ask my professor or instructor, ‘Can you please remove this desk so I can get to the front?’”

Certain facilities on campus have been making efforts toward greater physical accessibility. For instance, following the completion of the Addition and Renovation Project in 2016, the UCSB Library is now fully up to date with ADA building standards, according to Deputy University Librarian Alan Grosenheider. The project implemented ramps for internal elevated walkways throughout the building, adjusted bookshelf areas for wheelchair accessibility and updated restroom stalls.

“We hope that the entire building, particularly the grand new building, and renovated building is accessible to people with disabilities,” Grosenheider said. “We’re removing as many barriers as possible.”

Grosenheider explained the possibility of unintentional barriers impeding the library’s accessibility, like when visitors move furniture around — which blocks aisles — or run power cords across walkways.

“Students always ask for more power outlets to charge laptops or other devices, but that also means tripping hazards for people that have mobility issues or are in a wheelchair when they’re crossing aisles,” he said. “There’s some spaces, because of the congestion of furniture and people trying to find power which isn’t necessarily where they want to be, that there’s maybe some unintentional barriers that occur.”

Grosenheider also expressed concern about obstructions for the ramps outside the library, like those tabling in the Arbor potentially blocking access to these areas.

In addition to updating the library according to ADA building regulations, Grosenheider said there are further improvements to be made that may not have been necessarily a part of the standards, such as installing automatic door scanners.

Lee-Park said that although buildings like the library have greater accessibility in comparison to other facilities on campus — such as the two elevators with buttons on either end — elevators are often being used by the majority of students accessing the library, resulting in long wait times for students with disabilities who require the elevator to access the upper floors.

“Most of the people that are in the library are using elevators, and it’s not like they have the adequate training to know to get off [for a student with a disability],” Lee-Park said. “It’s better, but it’s incomplete.”

In partnership with the Disabled Students Program (DSP), the library also implemented the Adaptive Technology Center (ATC) which is located on the oceanside first floor to provide supportive resources for students with disabilities. However, student organizations like C.O.D.E. and UCSB student leaders, like fourth-year sociology and Asian-American studies double major and Associated Students External Vice President for Statewide Affairs Marvia Cunanan, have voiced concerns over the accessibility of the center.

Lee-Park noted that the center is difficult to access due to its location in the back of the library.

“It wasn’t specifically designed, in my opinion, for people who use wheelchairs, as it is in the back of the library,” she said. “And, you have to open [the door] with your access card, and they can’t open it for you on the other side, which means that you have to be the one to open the door.”

“Is it a good space? Yes, and I would use it more, but the process to get there and actually use it is inaccessible,” Lee-Park continued.

Cunanan said that the concern over the entrance to the ATC has been discussed with Vice Chancellor for Student Affairs Margaret Klawunn, and is in the process of being addressed.

“The technology center doesn’t have a door actuator and it’s a barrier that we think needs budgetary commitment towards installing,” Cunanan said.

University housing was another infrastructural sector brought up by fourth-year statistics and data science major and C.O.D.E. Internal Affairs Co-Chair Jay Shreedhar, who said that apartments like Westgate — a building typically reserved for students with disabilities, according to Shreedhar — do not have elevator access despite having two floors.

“They do not have an elevator, and the only way to get to the second floor is stairs, and the ramp outside is pretty narrow as well,” Shreedhar said, noting that he’s also heard most of the dorms are not ADA-compliant.

Beyond specific facilities, Cunanan said that the campus itself is oftentimes difficult to maneuver around if you do not have access to a car or an adequate parking permit, especially for students with mobility issues.

“There’s a limit in how many parking passes the school gives, and I’m just lucky enough to have a parking pass that lets me park around campus, and I wouldn’t be able to get around campus as easily if I didn’t,” Cunanan said.

To make the campus easier to navigate and access, C.O.D.E. is working towards implementing a golf cart transportation service at UCSB — mirroring UC campuses like UC Davis, among others — to provide students with mobility issues a quicker way to maneuver around campus.

The project has just secured funding and is being discussed between UCSB student leaders and administration, according to Lee-Park.

The project has been in the works for several years, according to Shreedhar, but concerns over logistics like funding have delayed the implementation of the service. Regardless, with urgent advocacy and a continued push to consider the transportation service, Shreedhar said the project is likely to be furthered in the near future.

C.O.D.E. is now recruiting for an ADA coalition, which will be made up of focus subdivisions like the Facilities Maintenance and Accessibility Team, the Disabled Student Program Liaison Team and the UC Campus-Wide Networking and Building Solidarity Team, among others.

Once established, the group aims to assess the physical accessibility of UCSB’s campus and utilize the data to commence conversations around protocol and violations with administration and housing staff.

“They will essentially work in teams — there will be a team that does campus walks to determine whether certain buildings are physically accessible,” Shreedhar said. “And, there’ll be another team that would be a liaison between C.O.D.E. and admin, so that they could communicate all the issues that C.O.D.E. has been gathering from the disabled community.”

Cunanan said that there is still much to be done to ensure that existing facilities on campus are accessible to all students, regardless of ability, and highlighted the hypocrisy of such infrastructural deficiencies as a university that spotlights its efforts toward diversity, equity and inclusion.

“There’s a lot of hypocrisy that goes on when it comes to the UC system, and they should be a little bit ashamed,” Cunanan said. “This institution prides itself in inclusive excellence and diversity and equity but, in practice, what does this look like? It’s hard to say.”

Cunanan said that in order to create tangible progress toward disability justice and equality, the administration must talk about issues the disability community faces and include individuals with disabilities in the conversation.