The Daily Nexus will be reporting and live-tweeting results from the Nov. 8 general election for statewide and local races. 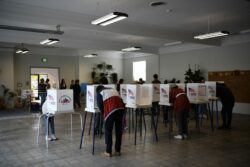 Local residents line up inside the Isla Vista Community Center, serving as a polling location for this year’s midterm elections, to vote on Nov. 8. Shiuan Cheng / Daily Nexus

Election results were posted following the close of voting polls at 8 p.m. and will be updated throughout the night as ballots are counted. Santa Barbara County released mail-in voting results at 8:15 p.m. and same-day polling place results beginning at 9 p.m on election day.

The results for the local elections below currently include votes by mail and mailed ballots, as well as votes cast at polling locations.

Data is based on the semi-official election night final results released by Santa Barbara County. As of Wednesday, Nov. 9 at 9:40 a.m., all 297 precincts have reported results. 75,799 votes have been cast of 237,759 registered voters, with a 31.88% turnout amongst eligible voters in the county.

11/9/22 9:40 a.m. U.S. Congressman Salud Carbajal, the Democratic incumbent, won with 60.34% of the vote against Republican Brad Allen, a businessman, researcher and pediatric surgeon. Successfully protecting his seat in Congress, Carbajal will go on to serve a fourth term, representing Santa Barbara County and the Central Coast.

11/9/22 9:40 a.m. Gregg Hart, currently representing Isla Vista in the Second District on the Santa Barbara County Board of Supervisors, won with 58.77% of the vote. Runner-up Mike Stoker, a small businessman and formerly a county supervisor, earned 41.23% of the vote.

11/9/22 9:40 a.m. In this three-way race for two available seats, challenger Julia Barbosa failed to unseat IVCSD President Spencer Brandt and incumbent Jay Freeman. Brandt ended election night with the most votes, at 42.08%, followed by Freeman with 30.9% of the vote and Barbosa with 26.25%. Barbosa is currently serving her term as Isla Vista Recreation & Park District Director set to expire this December.

11/9/22 9:40 a.m. Incumbent Shirley Weber (D) is leading with 58.1% of the vote, followed by Republican challenger Rob Bernosky with 41.9% of the vote. Weber, appointed to serve as secretary of state by Newsom in 2020, is facing her election for the position for the first time.

11/9/22 9:40 a.m. Incumbent Rob Bonta (D) currently has a lead against Republican Nathan Hochman, a former U.S. Assistant Attorney General, having earned 57.2% of votes. Bonta is running to retain office after Newsom appointed him to fill the seat’s vacancy in March 2021.

Member of State Board of Equalization, District 2

11/9/22 9:40 a.m. Senator Alex Padilla (D) is leading with 59% of the vote against Mark Meuser (R). Newsom appointed Padilla to fill the vacant seat after Kamala Harris’ resignation from the Senate in preparation for her appointment to her currently-held position as U.S. Vice President.

11/9/22 9:40 a.m. Voters are currently leaning toward approving Prop. 1, with 65% voting “yes” on a legislative amendment to establish a constitutional right to reproductive freedom.

11/9/22 9:40 a.m. Voters are currently leaning toward rejecting Prop. 27, with 83.3% voting “no” to allowing online and mobile sports wagering outside tribal lands.

11/9/22 9:40 a.m. Voters are currently leaning toward approving Prop. 28, with 61.5% voting “yes” to providing additional funding for arts and music education in public schools.

11/9/22 9:40 a.m. Voters are currently leaning toward rejecting Prop. 29, with 69.9% voting “no” to requiring an on-site licensed medical professional at kidney dialysis clinics and establishing other state requirements.

11/9/22 9:40 a.m. Voters are currently leaning toward rejecting Prop. 30, with 59% voting “no” to providing funding for programs to reduce air pollution and prevent wildfires by increasing tax on personal income over $2 million.