Isla Vista Recreation & Park District held a ceremony on Oct. 31 at 961 Embarcadero del Mar to celebrate the founding of its district 50 years ago in 1972 on Halloween. 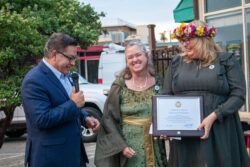 The Isla Vista Recreation & Park District (IVRPD) oversees 58 acres of parkland within their jurisdiction, including 25 parks and open spaces, and organizes community programming and recreation.

Community members across generations gathered to celebrate the history of IVRPD, with current and former board members, local elected officials and UC Santa Barbara staff in attendance.

Congressman Salud Carbajal characterized the ceremony as a reflection of the district’s goals of inclusivity and diversity.

“If you look around, it’s intergenerational. It’s diverse, and the event itself is one that captures the essence of what the district has always sought to achieve,” Carbajal said in an interview with the Nexus. “Being inclusive, making sure that they’re providing safe spaces, safe events for everyone to come together and celebrate and be one community.”

“Coming out here made me reflect on when I was a Gaucho and a student here,” Carbajal, a UC Santa Barbara alumnus, said in his speech. “I’m very familiar with the work that the Isla Vista Rec & Park District has done over the years to promote our parks and open spaces, gardens, activities, and recreation in general.”

At the conclusion of his speech, Carbajal presented a certificate of special congressional recognition to Kiefer and Soutar in honor of the district’s 50th anniversary and for its “outstanding and invaluable service to the community.”

Hart, representing the second district including Isla Vista, expressed his awe at the road that IVRPD has traversed since its early founding days.

“It’s really amazing to think that 50 years ago tonight, activists were knocking on doors, turning out the vote to create the Isla Vista Rec and Park District,” Hart said, addressing the crowd. “Let’s all celebrate another 50 years, and incredible creativity and energy and things we can’t even imagine that are going to be created in the next generation of leadership.”

Soutar highlighted the district’s work, such as the preservation of the vernal pools, maintaining open spaces and hosting community events, and festivals and concerts in Isla Vista’s downtown “pocket” parks.

“So few people have a space that they can go and relax in and be in nature and be with the wildlife, and those pocket parks are absolutely crucial to the people that live here,” Soutar said.

Soutar continued by thanking everyone for contributing to the district’s mission, recognizing the efforts of past leaders, current staff and other I.V. community members in attendance of the ceremony.

“I really would like to thank the people 50 years ago who had this vision, that understood that in a town like this, you need these green spaces, you need these open spaces,” Soutar continued. “Many thanks to our amazing staff and everybody else. I’m humbled.”

Kiefer emphasized the importance of open space preservation and urged for the community to continually support the district’s environmental initiatives.

“As we embark into the next 50 years, I ask you to look around and acknowledge all that you do to support green spaces, our last undeveloped frontier that preserves habitat for our existence,” Kiefer said. “I ask that you continue to seek environmental justice in your work, in your conversations, and remember those that deserve public programs and spaces.”

She concluded by recognizing the shared efforts of her staff, the I.V. Community Services District and other partner organizations to uphold the district’s vision.

“I am honored to be at the helm of this organization during such a monumental shift for I.V. To this, I thank my team, in which I am nothing without … and to my colleagues who continue to raise awareness about the importance of this community, and to our partner organizations who elevate our vision,” Kiefer said. “And lastly, I thank our board of directors who listen and share our values for this district.”

Carbajal recognized the significant work of Carmen Lodise, who has been a local activist in I.V. for over 40 years.

“I just want to recognize Carmen Lodise. Not enough has been said about his contribution to Isla Vista and the I.V. Rec & Park District,” Carbajal said. “He’s a great friend, and he’s been a great leader, and I think we would do a disservice to not recognize his extraordinary contributions to the community.”

Lodise was involved in the early establishment of IVRPD and served on its board of directors from 1976-80.

“I voted in that election to establish the Park District. It was maybe my first vote in Isla Vista, because I had just come to town earlier that same 1972,” Lodise said at the ceremony via Zoom meeting. “So the park district has always been at the center of my heart.”

David Fortson, former IVRPD board director who served from 1986-89, recalled the work he completed in office to renew the district’s bond and double the amount of park space for residents.

“We lowered the overall taxes, doubled the park size and we’re a bunch of long haired hippie progressives, showing people how to get the best of both worlds,” Forston said in his speech.

Forston relayed a message of civic duty to the students living in Isla Vista, encouraging them to be involved in local politics.

“I just want to give a big shout out to all the district directors since then, and particularly the student population who’s represented both the districts as an [IVRPD] director, but also been participating in third district supervisorial races and congressional races,” Forston said. “You’re an important voice that we need to keep strong.”

Jeff Walsh, IVRPD director from 1979-84, described the changing landscape of Isla Vista, with many of the open spaces once owned by the district having since undergone development.

“When I first moved to Isla Vista, there were a lot of vacant lots that were owned by the district and they had these little homemade wooden signs with rainbow hearts that said,  ‘This land belongs to the people of Isla Vista,’” Walsh said. “A lot of the parks got developed but I was thrilled when Congressman Carbajal read the certificate that mentioned open space because that was really the genesis of the district.”

IVRPD Director Ash Valenti reflected on how their work through the district has reinforced their passion for environmental restoration and their appreciation of the I.V. community.

“My favorite moments have been when we’ve done native plantings and ecological restoration work and community food forests, and just seeing all the magic that happens in the parks when people come together,” Valenti said. “Not everybody has so much open space, and we’re really lucky.”

“I don’t regret one moment of my 35-year tenure living in this community. I don’t call it a town. I don’t call it a city. I call it a community because that’s what it is, and seeing everybody here together enjoying this 50th anniversary of a wonderful organization that has done a lot for the community. It’s humbling. It is heartwarming. It’s almost emotional,” Sarria said. “I love our community, I hope you do too.”