Halloween weekend of 1986 was a riotous occasion. Playboy magazine had named UC Santa Barbara a top party school in the nation that year, and over 25,000 visitors flocked to Isla Vista for Halloween. 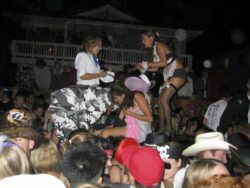 College students stand on top of a parked car in the middle of a street in Isla Vista in 2003 during Halloween weekend. Courtesy of Jay Freeman

“The town was a madhouse; you literally had to yell to hear yourself heard to a person standing next to you as far inland as Abrego Rd,” Carmen Lodise wrote in the 2019 edition of “Isla Vista: A Citizens History.” “The cops busted over 1,000 persons that weekend, nearly three fourths from SDSU.”

In his book, community activist and former parks official Lodise reported the first instances of Halloween partying taking place on Del Playa in the early ‘60s, with parties filtering into the rest of Isla Vista in the coming decades.

“Halloween is the second most popular holiday in the United States. But it’s definitely #1 in Isla Vista,” Lodise wrote. “Starting sometime in the 1960s, locals began dressing up and attending keg parties along Del Playa Drive. In the ‘70s the parties moved in land, too, and area high schoolers began sneaking in.”

“I have this very specific memory in 2015, sitting at Woodstock’s with my friends and watching a group of probably about 16 police officers playing frisbee with some guy on the street,” Isla Vista Community Services District (IVCSD) President and Director Spencer Brandt said. “In that year, it really did feel like there were more police officers than residents because so many people had left town.”

“That’s when the county started paying attention to try and do something to make it safer because there are a lot of safety challenges associated with it and a lot of neighborhood challenges to trash getting left on the streets.”

The Santa Barbara County Board of Supervisors instituted severe drinking restrictions with a November 1986 measure to ban drinking an alcoholic beverage or possessing an open alcoholic beverage container on any Isla Vista street, parking lot, school property or other place open to the public.

The Santa Barbara County Sheriff’s Office also began responding to the huge crowds with heavy policing in an attempt to “organize” the event, according to IVCSD Director Jay Freeman.

Freeman said Halloween was still a huge event when he arrived in Isla Vista in 1999.

“Halloween was still standing room only across multiple streets … not just on Del Playa,” he said. “It filled up all of Sabado Tarde, and it spilled out onto Trigo.”

At the time, policing authorities did not enforce road closures, and cars drove down Isla Vista’s dangerously overcrowded streets, according to Freeman.

“People took over the street, and so the interaction of people with cars was quite dangerous and sometimes destructive,” Freeman said. “They’re standing on a car in this photo that is just in the throng of people.”

The Deltopia riots and a mass shooting in 2014 prompted local agencies to reassess their policing strategies with regards to Halloween. Isla Vista Foot Patrol, a branch of the Santa Barbara Sheriff’s Office, and the UCSB Police Department upstaffed their patrol and imposed new parking regulations and road closures. UCSB and the local government strongly promoted the community message to “Keep it Safe, Keep it Local.”

“After the Deltopia civil unrest in 2014, and then the mass shooting a number of months later, there was a change in the enforcement strategy,” Brandt said. “There was also a real organizing community effort to try and keep the community safer.”

Brandt added that since then, “Halloween has not really existed” in I.V. — at least not in the partying sense.

UCSB Associated Students, IVCSD and the Isla Vista Recreation and Park District, among other organizations, have regularly sponsored safe, sanctioned events as an alternative.

Edgar Ambarzumjan, a foreign exchange student from Germany studying economics, said the local restrictions have caused UCSB students to host parties in advance of the actual Halloween weekend. This year, Ambarzumjan said he attended the Halloween party held by the Armenian Student Association, for which he is a club member.

He said that for Halloween itself, he will be working as a Community Service Organization officer for the Delirium concert sponsored by A.S. Program Board.

Ambarzumjan said he is prepared to see a quieting down of I.V. from the typical “wild” weekends he witnesses on Del Playa.

“I can imagine that because of the police and the super strict rules on that weekend, people are going outside [of I.V.].”

Azure Otani, fourth-year economics major, works at the UCSB Recreation Center and plans to attend some of the safe, locally sponsored events.

“This weekend, I’m going to Hallowheels on Friday night with my friends, and then on Saturday, I’m debating if I want to go to Delirium,” Otani said. “I might actually go down to L.A. for a Diwali event.”

“It does kind of suck that I.V. is shut down for Halloween weekend,” she continued. “I don’t understand why they do it because they just move up everything a week and it all still happens anyway. But maybe that’s so other schools don’t come down.”

Kinga Bihari, a third-year environmental studies major, said she normally stays in for Halloween weekend but will be leaving I.V. this year to visit her boyfriend’s family.

She said she appreciates the safe events but not the level of policing subjected on students.

“I definitely feel like the police presence is way overblown. I think it’s just unnecessary, especially because everyone else is also doing their job,” she said. “I feel like it’s good to keep it local, and I appreciate all the events they’re putting on like the Delirium concert. I know some people who are actually staying for the concert, so I feel like that’s good, but the police presence is just so ridiculous to me.”