The Daily Nexus
UCSB
Diwali Across the Globe
October 27, 2022 at 10:42 am by Siddharth Chattoraj

Diwali is an annual, five-day festival that, according to a large number of people, commemorates the Hindu god Lord Rama’s return to his kingdom of Ayodhya from a 14-year exile after conquering the demon god Ravana.

Per Hindu mythology, Rama’s stepmother banished him and his wife Seeta to a forest so her own son could become king, and Ravana eventually took Seeta hostage. After 14 years, once Rama fought and finally killed Ravana and returned home with Seeta, the people of Ayodhya shared sweets and lit the path with a plethora of lamps said to outnumber the stars.

The celebration is also known as “Deepavali” or the “Festival of Lights” in symbolism of the row (avali) of clay lamps (deepa), also known as diyas, that celebrators place outside to protect their homes from spiritual darkness.

According to popular belief, Lord Rama first worshipped Lord Ganesh, the remover of obstacles, and Goddess Laxmi, the goddess of prosperity, upon his return. As such, a tradition was born to worship those gods and conduct a Puja on Diwali night to celebrate the triumph of good over evil. That night is set on the 15th day of the month of Karthik (the darkest night of the Hindu lunisolar calendar) in India’s calendar, a new moon day like the day Lord Rama returned. This year, Diwali night fell on Oct. 24.

Some others believe that Diwali commemorates the time Lord Krishna, who came to assist humanity in a time of great need, defeated the demon Narakasura who was terrorizing the Earth.

There is no universally agreed upon origin, and there are many different ideas on how Diwali started.

The first day of Diwali, Dhanteras, is usually an auspicious day to buy metallic items and precious stones or jewelry for good luck and worship Lord Dhanvantari, who brought health and medicine to humans. Day two, Choti Diwali, celebrates the day Lord Krishna killed Narakasura’s demon, freeing the world of its wrath. Day three is Lakshmi Puja when Ganesha and Lakshmi are worshipped. Day four is Govardhan Puja, where people commemorate the time Krishna lifted the Govardhan Hill to shelter a village from tremendous rains, symbolizing God’s protection of his devotees. Day five is Bhai Dooj, which celebrates sibling love.

Diwali is celebrated in many places across the globe with lights, jewelry, henna and rangoli art, fireworks, sweets, shopping, house cleaning and more, and it is an ever-growing tradition that over a billion people take part in. Many Hindus and some Jains, Sikhs and Buddhists celebrate the festival. Just recently, in fact, New York City declared Diwali to be a school holiday.

Here are some of the countries where Diwali is an officially recognized holiday. 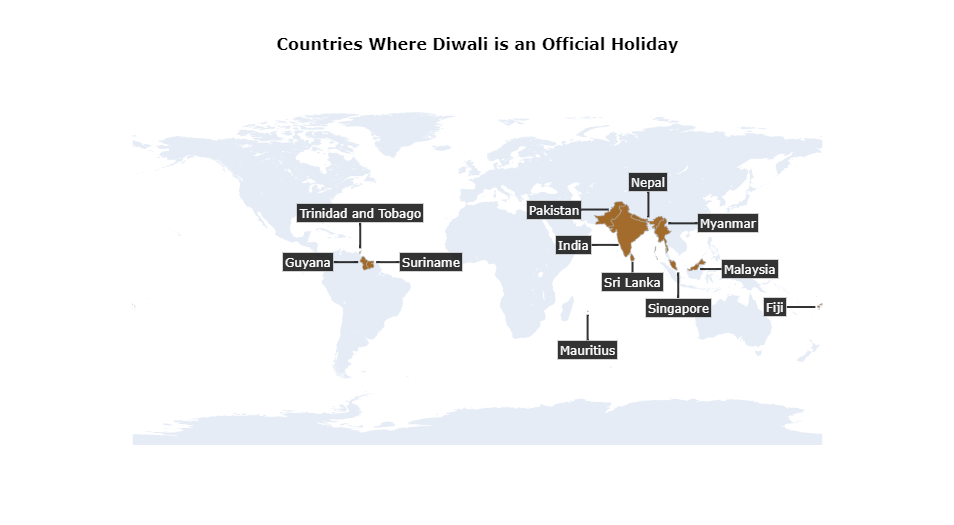 Diwali, a public holiday in Fiji, is celebrated with many lit lamps, gift exchanges and cultural talks in English, Hindi and Fijian languages in a showing of communal harmony. Many schools in Fiji organize events, such as pujas, singing and rangoli, and incorporate the culture of the festival into the curriculum.

Guyana has a large Hindu population, and many Guyanese Hindus and non-Hindus celebrate the national holiday. There is an annual Diwali motorcade on Diwali eve featuring bright lights, majestic floats and women emulating Hindu deities riding on chariots. The motorcade and Diwali celebrations are a symbol of unity and resilience in Guyana, and various people of different backgrounds come together to participate.

India, where Diwali originated, is marked by numerous festivities during Diwali week. Sweets and cultural outfits are in high demand, and many people burst firecrackers at night, which in turn causes large amounts of smog to clog up the air. The town of Sivakasi in Tamil Nadu has 640 factories that produce 90% of India’s firecracker supply. Lamps are lit in houses and sent across river banks, special prayers are said to Lakshmi and markets buzz in celebration.

There are street bazaars in the Little India and Brickfields areas, where a large Indian community resides in Kuala Lumpur. There are public processions and fireworks displays. Many homes and buildings have kolam decorations, floor designs made from colored rice and powder thought to bring prosperity to homes.

During Diwali, the island turns bright with illuminated houses and an abundance of colorful garlands. Many of the Hindu temples in Mauritius conduct grand pujas. Additionally, home cooking is common, and people like to distribute homemade sweets to their loved ones. It is also summer in Mauritius during Diwali, and as such, there is a large market for new cultural outfits that both fit the Mauritian-Indian taste and are feasible in the heat.

Many participate in diya lighting festivities and prayers for everyone’s happiness and well-being. There is traditional dancing and music along with sweets as people worship God and celebrate Diwali.

For Diwali, better known as Tihar in Nepal, people celebrate both the gods and animals. People pray to Lord Yama so that they may go to heaven, and they also worship and feed the animals because they are considered divine gifts from nature. Day one is reserved for worshipping the Crow (the messenger of Yama); day two for the Dog (for love, protection and a gate to heaven); day three for the Cow (for prosperity); day four for the ox (a farmer’s best friend), Govardhan Mountain, and self-worship (for purity); and day five is for celebrating the love of siblings. Almost the entirety of Nepal participates in the festival, and many clean their houses and purchase new items, buy clay lamps and lots of lights, sweets, and rangoli colors for decorations. In Kathmandu, the Grand Tihar Festival lights up the city with lamps, firecrackers and cultural music and dance.

Diwali in Pakistan is an optional holiday — employees in Pakistan are granted one optional holiday if Muslim and three if non-Muslim in a calendar year. The rule is silent about private Pakistani establishments. Despite their tensions, it is tradition for Pakistani troops and Indian troops to exchange sweets and pleasantries at the border.

The Little India district puts up a lighting and flower display and a Diwali bazaar that brings together young and old people of different backgrounds into a lively, fun environment. A grand lighting of the lamp was held in September, and from then until the end of Diwali, five million people are expected to visit Little India.

A lot of people, especially children, in Sri Lanka celebrate Diwali by bursting firecrackers. Diwali in Sri Lanka emphasizes more the victory of good over evil than Rama’s victory over Ravana. Many Sri Lankans, particularly the Tamil Hindu population, say prayers and light oil lamps to mark the festival.

Many people light oil lamps, clean their surroundings, light fireworks and celebrate Diwali together in Suriname. A large portion of people in the country are of Indian origin, descending from 19th-century contract workers.

In Trinidad and Tobago, many celebrate with prayers, feasts and diya lighting ceremonies. Many Hindus and non-Hindus visit the Divali Nagar, meaning City of Lights, held by the National Council of Indian Culture. Approximately 150,000 people from across the Caribbean visit over the nine nights the Nagar is run for, and visitors can enjoy cultural performances, Indo-Trinidadian foods (e.g. pepper roti), educational activities, shopping and more.

A version of this article appeared on pg. 9 of the October 27, 2022 print edition of the Daily Nexus.

Siddharth Chattoraj
Siddharth Chattoraj is the assistant data editor for the 2022-23 school year. He loves applying data to various fields to figure out solutions to new and existing problems. He also enjoys journalism, theater, marketing, running, singing, and forming spontaneous plans with friends. Siddharth can be reached at data@dailynexus.com.