The UC Santa Barbara women’s soccer team will face off against California State University, Long Beach at home on Sunday, Oct. 23, looking to win its third consecutive game and advance to the Big West Soccer Championship. 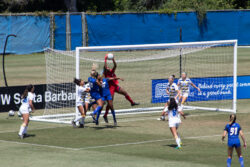 The UCSB goalie jumps up for the ball. Nexus File Photo

After defeating UC Irvine 1-0 on Oct. 20, the Gauchos rank No. 6 in the Big West Conference, and the top six teams move on. A victory on Sunday would likely secure their spot in the tournament, but a loss or tie could eliminate them from contention.

“We’re obviously trying to get that win so we can move on into the tournament and keep playing games,” sophomore goalkeeper Sabrina Hinz said. “We want to win at home and we want to win our last game of the season.”

Long Beach State, on the other hand, has already cemented its position in the playoffs. After tying 1-1 with California Polytechnic State University, San Luis Obispo on Oct. 20, the Elbees currently hold the top seed in the conference entering Sunday’s game.

“We want to hand them their first loss of the Big West League,” Hinz said. “We did it to Irvine [Thursday] night, and we just want to keep rolling and do it again, because that gives us more confidence [and] it lessens Long Beach’s confidence.”

Since 2018, UCSB has played Long Beach State four times, coming away with two victories and two losses. However, the Gauchos have bested the Elbees in their past two matchups, including a 2-1 victory on Oct. 31, 2021.

“[Returning players] always said that the games against Long Beach have been super competitive and close, same with Irvine,” Hinz said. “Whenever the game is super close and competitive, it’s always going to be a hard-fought battle.”

Because Sunday’s competition is the team’s last home game of the season, the game will serve as the team’s senior day, where the team will honor and celebrate the graduating seniors.

“We need to win this game and that’s pushing us to want to work harder and play harder for not only ourselves and each other, but especially for our seniors,” Hinz said. “Being able to recognize them and all they do and play, like, one last game with them is super special.”

The Gauchos’ senior day and their fight for a playoff spot will begin at 1 p.m. at Harder Stadium.