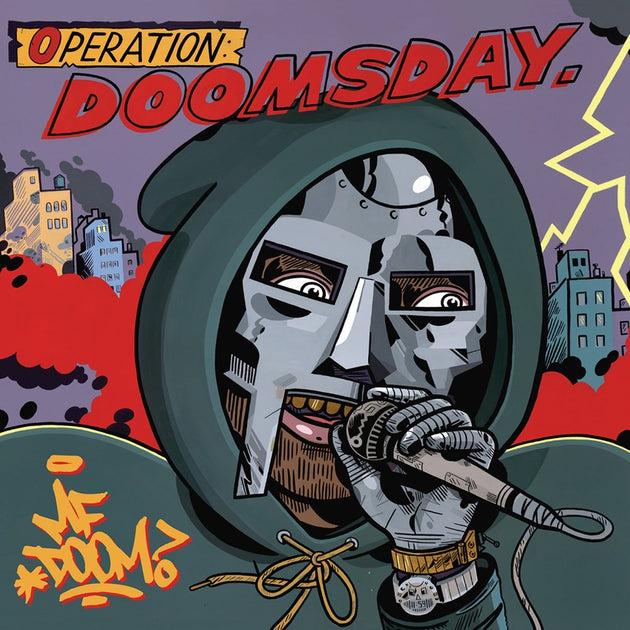 MF DOOM – where do I even begin? Since my early high school years, I’ve listened to DOOM on repeat, diving deeper and deeper into his discography. Many hail DOOM as “your favorite rapper’s favorite rapper,” and while I understand that sentiment completely, I am a firm believer that DOOM is the one who should be your favorite rapper. Being my favorite artist of all time, I decided to get a tattoo of his mask at the end of 2021, and each time I look at it I’m reminded of DOOM’s lyrical greatness and the significant impact he has had on my life.

MF DOOM, or Daniel Dumile, shaped the ’90s underground rap and hip-hop scene in the U.S. DOOM greatly disapproved of commercialized rap, which rapidly took over the music scene once the 21st century arrived. As podcast producer Tamika Adams wrote,  “The commercialization of hip hop undercuts the original purpose and message of hip hop through normalizing and naturalizing predictability, stereotypes, hypermasculinity, over-sexualization of women, and promoting meaningless music, all for profitable gain.”

On Oct. 19, 1999, MF DOOM released his first solo studio album “Operation: Doomsday,” a carefully crafted album featuring incredible flow and some of his strongest lyrics. As is the case in many of DOOM’s albums, there are a handful of skits sprinkled throughout the album, which helps strengthen the album’s plot. After the opening skit, titled “The Time We Faced Doom (skit),” is the track  “Doomsday,” one of his most popular songs to date, with over 110 million streams on Spotify as of Oct. 2022. DOOM sings, “Pass the mic like ‘Pass the peas like they used to say’ / Some M-er F-ers don’t like how Sally walk / I’ll tell y’all fools it’s hella cool how ladies from Cali talk.” DOOM has some of the best rhyme schemes in all of rap history.

We are then led to the album’s third track “Rhymes Like Dimes.” This track features one of my favorite DOOM lyrics of all time: “Only in America could you find a way to earn a healthy buck / And still keep your attitude on self-destruct.” DOOM is overtly critiquing the depressing capitalist lifestyle we are trapped in as workers and is also likely taking a jab at the hyper-commercialization of rap music at the end of the ’90s.

The following track “The Finest” features lyrics such as, “Used to talk to myself, I told him, ‘Shut the fuck up!’ / Buckle up, cause it’s about to be rough / He said, ‘Keep talking that shit, you ’bout to be snuffed.’” DOOM is facing an internal battle with himself and his psyche in these lines, which is very interesting since this song is also a 10 verse back-and-forth between DOOM and Tommy Gunn. The following track is a skit titled “Back in the Days (skit),” which is then followed by the song “Go With the Flow.” DOOM samples the Spinners’ 1974 song “Ain’t No Price on Happiness” on this track. DOOM sings, “The super motherfucking villain grip the mic with an iron hand / Throwing emcees to the fire from out the frying pan.”

The album’s seventh track “Tick, Tick…” is a standout off the album. A Genius annotation states that “The song’s title is in reference to the tick of a metronome, as the tempo is constantly changing throughout.” The track also features one of the coolest samples off “Operation: Doomsday,” which is “Glass Onion” by The Beatles. The track “Red and Gold” comes next, and it narrates  DOOM’s dangerous stories. In the final hook of this song, DOOM sings, “Wig-Twisting Season / When some could get their wigs twisted back within reasoning / Mostly with these crimes of lying, and fronting, and cheating / All types of different styles of treason.” The album continues with the skit “The Hands of Doom (skit),” which samples dialogue from the 1982 movie “Wild Style.” The iconic rapper Nas also sampled lines from “Wild Style” in the first track on his 1994 album “Illmatic.”

The next track “Who You Think I Am?” features lyrics such as, “Loved not for who you think I am, but who you want me to be / A true thuggin’ emcee, true thugs, with no strings attached / I wanna give you my slugs and don’t wanna take ‘em.” DOOM’s alias King Geedorah appears in this track, which is a very fun addition because the listener must decipher who is singing which line. The next track is another skit titled “Doom, Are You Awake? (skit),” my favorite skit on the album, as a matter of fact. Doctor Doom, the comic book character MF DOOM took great inspiration from while shaping his musical persona and appearance (such as the iconic mask the rapper wears), says, “‘What have I done to myself? My face is hideous / He made me hurry my experiment / Now I must hide my face from all mankind.’”

The 12th track off the album “Hey!” samples instrumentals from “The New Scooby-Doo Movies” television series from 1972. DOOM sings, “Who got more snottier flows than snotty nose? / And holds mics like he knows karate body blows? / Nobody knows / The trouble I see.” The next track “Operation: Greenbacks” features DOOM’s alias King Geedorah again, singing, “King Geedorah what they call me, either caesar or baldy / Probably have moved since last y’all saw me / On the D-low, I slaughter solo emcees, they paper-thin.” According to Wikipedia, “Greenbacks were emergency paper currency issued by the United States during the American Civil War that were printed in green on the back.” The title of this track is definitely another poke at the music industry’s mass commercialization of hip-hop. The album’s 14th track “The M.I.C.” features Pebbles, The Invisible Girl, who also contributed to the album’s second track “Doomsday.” Something especially interesting about this track is that it is written from the perspective of a microphone. DOOM sings, “And fine she pulled me to the sidelines / The mystery shot up with strong words / She was an intelligent wisdom and a songbird.”

The album’s final skit “The Mystery of Doom (skit)” precedes my favorite track on the album, “Dead Bent.” DOOM sings, “Ooh, you’re like the sun / Chasing all of the rain away / When you come around, you bring brighter days / She told him, ‘you’re the perfect one’ / ‘For me and you forever will be’ (microphone check one, two, one, two, one, two) / He told her, ‘I will rock this microphone, always’”. This woman is so head over heels for DOOM, but he ultimately prioritizes his music career; he chooses the mic over love.

The 17th track “Gas Drawls” samples Steely Dan’s 1977 song “Black Cow,” another standout moment from this magnificent album. The second-to-last track “?” is one of DOOM’s most intimate tracks, referencing his brother Dingilizwe, known professionally as DJ Subroc, who passed away in 1993 at the age of 19 (DOOM was 22 at the time). DOOM sings, “The ‘SUBROC’ three-finger ring with the ruby in the ‘O’, ock / Truly the illest dynamic duo on the whole block / I keep a flick of you with the machete sword in your hand / Everything is going according to plan, man.” DOOM and his brother were part of the hip-hop trio group KMD in the early ’90s (I highly recommend checking out their stuff).

The final track on the album “Hero vs. Villain (Epilogue)” challenges its listeners to decide if DOOM is a hero or a villain. DOOM sings, “Who’s the hero, what’s the villain? / The question still remains chillin’ / Listen to the music, try very hard to use it / Open up and research, and that’s the end of this verse.”