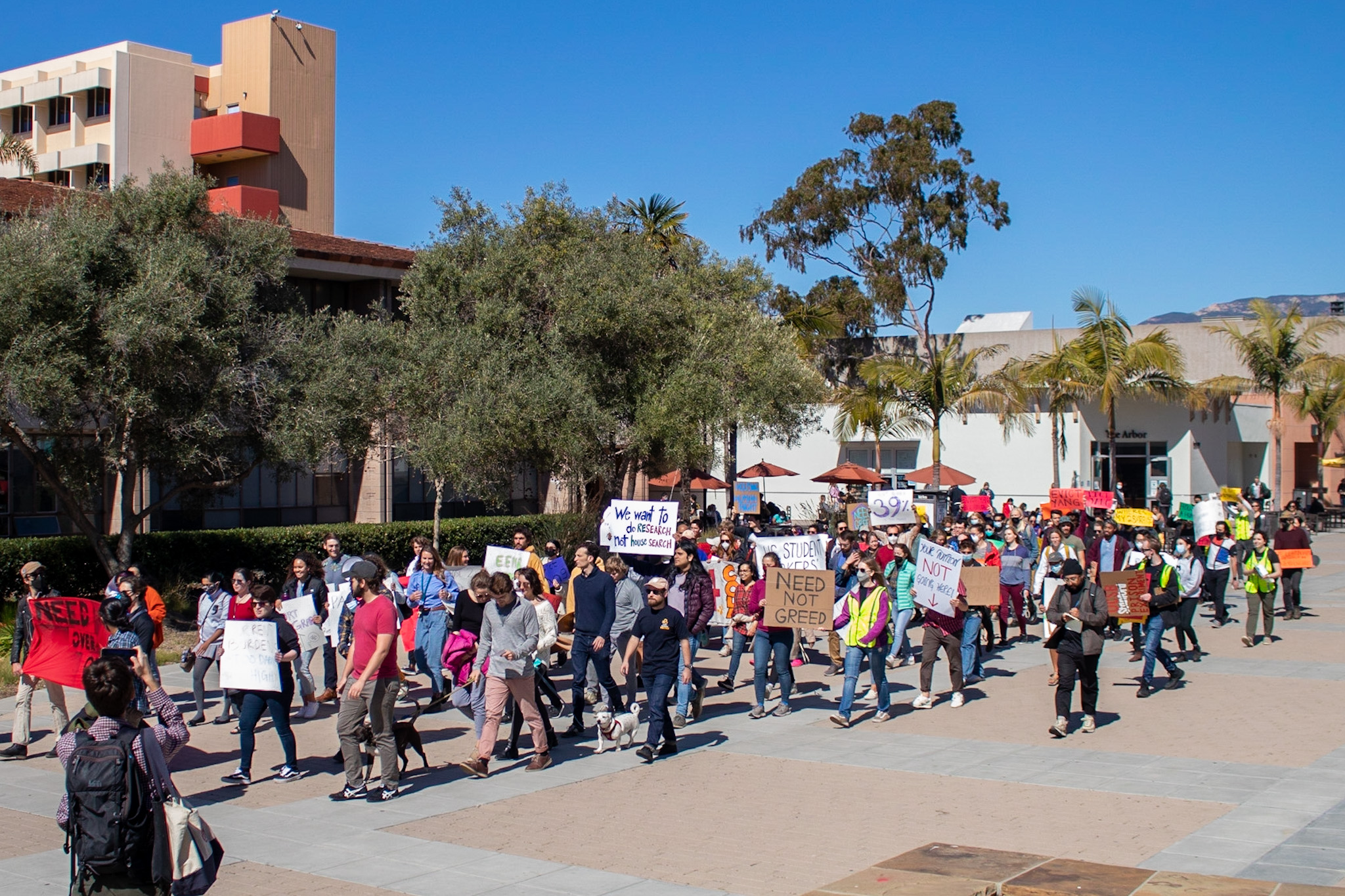 The negotiations, ongoing since March 2022, have yet to deliver a contract that satisfies the union’s demands, according to Biomolecular Engineering PhD Student Payton DeMarzo. The union accused the UC of participating in unlawful bargaining practices throughout the course of negotiations and has organized a strike authorization vote that will run from Oct. 26 to Nov. 2 to put further pressure on the university.

“The UC has been participating in unlawful bargaining as their proposals make no attempt to address our concerns,” DeMarzo told the Nexus in a statement. “If UC won’t bargain in good faith, academic workers will vote to authorize a strike, and have the legal right to do so via labor laws in the United States.”

“ASEs in ALL departments, and on ALL University of California campuses, struggle on a daily basis to survive given the contemporary costs of living in their respective cities and California more broadly: while UCSB is a school known for its high academic standards, it is hard to meet those standards when you’re worried about making rent, feeding yourself and a family, and providing UCSB undergraduates with the highest levels of support possible,” she said in a statement to the Nexus.

In negotiations, the union demanded an immediate rise in the base salary for academic student employees and researchers to $54,000.

But these negotiations have fallen short as the UC Office of the President (UCOP) has grown unresponsive to union demands, according to Schmidt, who — along with her colleagues — has closely followed the ongoing talks.

“Conversations at the bargaining table are growing stale and UCOP has shown little motivation to negotiate at all over things like a wage increase that would bring all ASEs out of rent burden and increased childcare and dependent support for ASEs with families,” Schmidt said in a statement to the Nexus.

As the ongoing negotiations have failed to produce a compromise, the union has elected to put forward a strike authorization, with ballots set to be sent out to current union members via email, according to an unofficial strike FAQ.

Should the vote pass, a strike would begin on Nov. 14 across every UC campus, leading academic student employees, researchers and postdocs associated with the union to withhold their labor until demands are met.

The union expects the UC to contest the legality of any strike and threaten workers with discipline or dismissal. Despite the risks, they’re encouraging members to withhold labor and stand in solidarity.

“If necessary, and if authorized, 48,000 academic workers will be able to go on strike to stop UC’s unlawful conduct and win our demands,” DeMarzo told the Nexus in a statement.

Before the vote’s announcement, the HGSA Executive Board polled its members to determine support for a possible strike authorization, according to Schmidt.

The poll’s results showed that 79% of the UCSB Department of History graduate students are prepared to vote yes when asked to strike, the department said in a letter sent to history department faculty and staff.

“If the administration does not meet our needs in bargaining, and a strike is called by the Union as a result of a successful SAV, Academic Student Employees, Student Researchers, Postdocs, and Academic Researchers will stop our paid work until the administration concedes,” the letter read. “Until the UC Office of the President agrees to the demands of the UAW and SRU bargaining teams, we ask that you help us hold the line.”

A possible strike would only end once the UC meets the demands of the union: improved child care policies and rent burden elimination via salary increases.

“We, workers, will decide collectively which actions from the UC will justify ending the strike, i.e., when the UC meets our demands by offering us a cost of living adjustment to alleviate our rent burden, adequate childcare subsidies for parent-workers, support for disabled workers, and reasonable course enrollment caps,” the strike FAQ said.

UCOP did not respond to a request for comment.