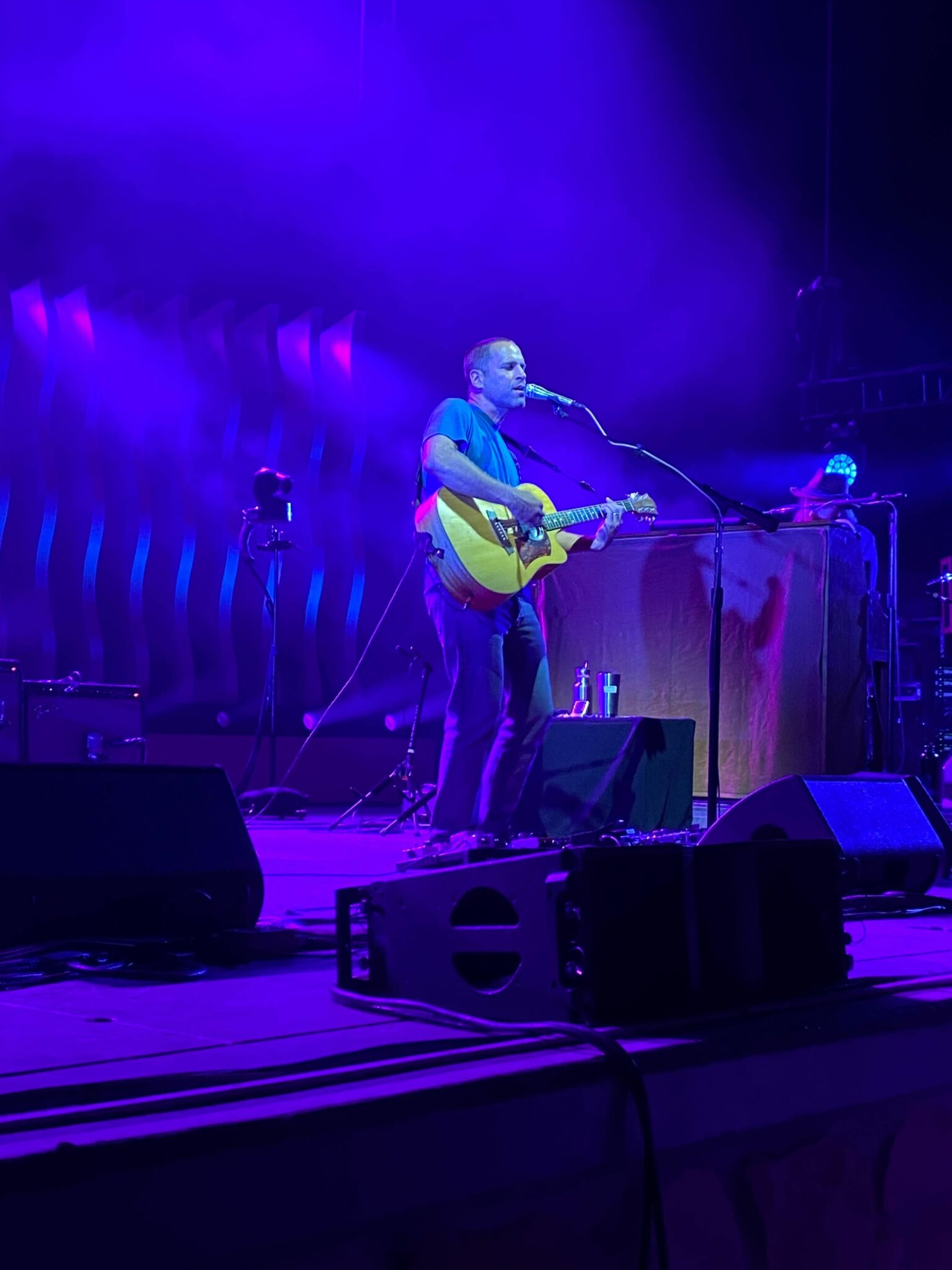 The warm, laid-back atmosphere of UC Santa Barbara was captured last week by university alumnus and singer-songwriter Jack Johnson at his second night performance at the Santa Barbara Bowl. Johnson and the Meet the Moonlight Tour, accompanied by Ron Artis II and Thunderstorm Artis, landed in Santa Barbara on Oct. 4 and 5. Fans across Southern California flocked to the Santa Barbara Bowl to get a taste of the soft-rock and acoustic goodness. Every seat was filled, and the pit was packed with college students, married couples, first dates, best friends and families. Environmental awareness T-shirts and surf-branded clothing speckled the crowd. Kids with noise-softening headphones sat on fathers’ shoulders, and family friends sang with arms around each other. A man and his guitar, strumming to UCSB-rooted lyrics, were on stage. No one was pushing, no one was shoving — just swaying to the music.

The North Shore, O‘ahu native, in a blue T-shirt, black Levi’s and a pair of well-loved flip flops, kicked off his concert with his song “Mudfootball (For Moe Lerner).” His show coursed with wholesomeness as he introduced his band — Merlo Podlewski on bass, Zach Gill on piano, Adam Topol on drums — who he has been playing with for what seems like forever, some even during his college years.

The tour promoted his new album, “Meet the Moonlight,” and while he did play new songs such as “One Step Ahead” and “Costume Party,” his older songs from “Inaudible Melodies” and “In Between Dreams” were crowd favorites. Fans smiled ear-to-ear as Johnson began to pluck the first few chords to “Upside Down,” undoubtedly sparking childhood memories as the Curious George song played. “I love you”s were intermittently screamed, to which Johnson laughed and thanked them. He made comments on concert-goers he had seen the night before. Two, small girls sitting on shoulders at the front of the crowd seemed to be the favorite spectators of the night.

The homey feeling was further planted in the show as Johnson shared heartwarming and funny stories behind some of his well-loved songs. “Inaudible Melodies,” originally about Bruce Lee, was written during his time at UCSB as an attempt to get an extension on a paper. His roommate, Chris Potter, told him to change “Slow down Bruce / You’re moving too fast” to “Slow down everyone / You’re moving too fast,” and that’s where the song stands today. Most of the song backgrounds are centered around his wife, Kim Baker, whom he met at UCSB. “Bubble Toes” mentions meeting her at the De La Guerra Dining Commons, and in “Do You Remember,” he admits to locking his bike to hers while running late to class.

The concert would have been a night to remember even if Johnson had only played his own songs, but the experience was taken to the next level when he brought out his good friends from North Shore, Ron Artis II and Thunderstorm Artis, during the opening act to sing Bob Marley’s “Soul Shakedown Party” — a beautiful tribute to one of his songwriting inspirations. Some danced while others played instruments, and the crowd sang and grooved along to the reggae rhythm. Johnson also weaved together fan-favorite “Banana Pancakes” with Steve Miller Band classic “The Joker,” and the crowd buzzed with half-applause, half-excited laughter. The entire show was filled with laughter.

Johnson finished the show on a warm and memorable note, but not before asking for audience requests. He joked about beating a curfew and trying to fit in as many songs as he could. Two more songs, but only half the amount of correct verses, were added to the show, and to the audience’s hopes and wishes, he ended with arguably his most popular song, “Better Together.” Arms linked, heads rested on shoulders, fingers intertwined and smiles cracked as people sang together, soaking up the last three minutes and 27 seconds of his show.

The flip-flop-wearing UCSB alum and musician left the crowd savoring the last few seconds of his show before throwing up a shaka and walking off stage. Fans responded with shakas of their own and funneled out of the Santa Barbara Bowl. The concert was a treat to experience and now lives on through pictures put up on refrigerators, tickets pinned to bulletin boards, videos circulating social media and newly discovered songs added to Spotify playlists. Santa Barbara will miss Johnson because, as he sang, “it’s always better when we’re together.”