The Iranian community at UC Santa Barbara is holding demonstrations and protests following the death of Mahsa Amini, a 22-year-old Iranian woman who was accused of incorrectly wearing her hijab and later died while in police custody. 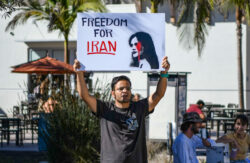 The group is currently tabling across from the library every day from 12-2 p.m. and at the intersection of Storke Road and Hollister Avenue in Goleta every day from 5-7 p.m. Shiuan Cheng / Daily Nexus

The Iranian “morality police” arrested Amini on Sept. 13  for allegedly violating Islamic laws requiring women to wear hijabs. She went into a coma after allegedly being tortured by police and hit until she collapsed into a coma, according to eyewitness sources. Iranian authorities transported her to a hospital, where she died Sept. 16.

Postdoctoral student at the UCSB Marine Science Institute Ali Payandeh is spearheading student efforts to protest and spread awareness of the treatment of Mahsa Amini alongside undergraduate, graduate, postdoctoral students and faculty at UCSB.

The group is currently tabling across from the library every day from 12-2 p.m. and at the intersection of Storke Road and Hollister Avenue in Goleta every day from 5-7 p.m.

“We have a demonstration table in front of the library. We want the students to come forward and ask us about the situation in Iran and we will be happy to answer their questions,” Payandeh said.

The group was formed only after Amini’s death, according to Payandeh. Iranian student associations — like the Iranian Graduate Student Association and Persian Student Group — exist on campus, but students wanted to form a new group with a primary focus on political and human rights activism, he said.

Aazam Feiz, a lecturer in the UCSB religion department, said she felt moved to participate in the protests to support her community. Feiz grew up in Iran, where she received her graduate degree and was forced to comply with Islamic laws and dress codes such as the mandatory wearing of the hijab.

“When I heard the news about Mahsa Amini, the 22-year-old Iranian woman who was brutally murdered by the morality police, it was very different for me just to stand aside as a woman and as a person who was living in that country for many years,” Feiz said.

Feiz has taught at UCSB for seven years teaching Persian language, literature and cinema classes, and regularly organizes Persian cultural and social events through her department. She described the additional layer of grief she experienced on Sept. 22, the first day of classes at UCSB and what would have been Amini’s first day of university.

“She was supposed to go and start her studies. It was the time for her to learn and get all her dreams. She was like a flower and it was time for her to bloom, but unfortunately they killed her and she has been buried and no longer with her family,” she said. “The Iranian regime insists they haven’t killed her … but they are killing people in the streets. It is so ironic to me. They are killing people to prove they have not killed Mahsa.”

The Iranian government cut off internet access in parts of Tehran and Kurdistan due to uprisings and protests following Amini’s death. Payandeh described his personal difficulties getting in contact with family members who live in Iran.

“We just know that people are being killed in the streets because they’re protesting. I myself haven’t heard about my family in almost a week,” Payandeh said. “This is another request that we have from other countries we have from the U.S. to be the voice. There’s no internet there. People are disconnected from the world — please be their voice.”

Feiz described the Iraniang government as “incapable” and pressed for an expansive revolution to bring democracy and freedom of speech, thought and religion to Iran.

“We want freedom, we want democracy in Iran, we want a better Iran,” Feiz said. “This time, it is different from before because enough is enough. We have seen a lot. We cannot believe their lies anymore.”

Payandeh said responses to the demonstration have been majoritively positive, with some exceptions.

“Some people know what’s going on in Iran and they support us. Some people unfortunately think that this is Islamophobia,” Payandeh said. “We have respect for all religions. What we want is the right to be free to choose your religion, to choose your lifestyle to wear or not to wear what you want.”

Payandeh added that standing up to the human rights abuses against Mahsa Amini reflects advocacy for women’s rights beyond Iran.

“If you stand up for Iranian women, then you send this message even to your own authorities to your own government that, ‘Hey, we are here for women and don’t you dare to touch other rights here because we stand up for all women around the world,’” he continued.

Although the UCSB protests have been organized individually, Payandeh said their group is in contact with Iranian communities at other universities to coordinate chants, draft joint statements and promote a consistent message.

“There’s not much we can do, and this is the only thing we can do,” he said. “If you look at just the Iranian community at UCSB, we have a small community — it’s not a big movement.”

Payandeh said that he hopes for the group, which is still in its infancy, to develop a long term focus and continue supporting Iranian human rights movements in the future.

“We still have to work and we need such groups to manage our protest and help people in my country,” he said. “Even if women can get their hijab rights, there are lots of other things that we have to fight for that I listed, lots of freedoms and rights that we don’t have right now.”