The Daily Nexus
Virtual Reality
BeReal is the False Heir of Social Media and Casual Authenticity
September 29, 2022 at 10:03 pm by Melody Chen 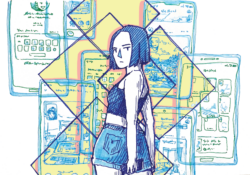 Scrolling through Instagram is, in some ways, a mind-numbing field study of human artifice. Over the past decade, the perfect photo has masqueraded under the name of authenticity. The “everyday life” of Instagram demands nothing less than a still image of the pre-planned, pre-posed and pre-purified. It is only when the COVID-19 lockdown had siphoned out the glamor of the ideal life reinstating a brand of “accidental beauty” and casual photo dumps that “authenticity” has gained its rightful place in the social media world. In other words, the personal brand is dead. And the age of “casual authenticity” has risen.

That’s where BeReal comes in: a social media app nouveau that is strikingly anti-Instagram. Founded in 2020 by French developers Alexis Barreyat and Kévin Perreau, BeReal promises a “chance to show your friends who you really are, for once,” as stated in the official description. The algorithm is simple: Once a day, BeReal sends a randomly timed notification, alerting users to capture both a frontal and rear-view photo of their life within two minutes. Photos taken after this timeframe can still be posted, but are badged as late. You can retake your photo as many times as you want, but your friends will know. And only after posting your image will you be allowed to view your friend’s posts and leave a “RealMoji:” a selfie reaction to your friends’ BeReal posts.

The app is targeting college students especially, according to NPR. There is an ambassador program with the goal of “creating a college presence that embodies our brand.” I first downloaded the app in June 2022 after many of my friends praised its merits. “Oh, it’s not like Instagram. It’s a lot more casual and fun,” my friends have said to me. Stamped with an earnest appeal, they would add, “It’s authentic too.” I caved. Just two months, I promised myself.

BeReal has redefined gamification in social media. Much like Snapchat streaks, BeReal prides itself on the two-minute photo timer. Early on, when the push notification popped up on my phone exclaiming that it was, “Time to BeReal,” I scrambled around my room in confusion, teetering between having to pose or be candid before I snapped a photo. Occasionally, I would wait until the perfect time, hours past the two-minute countdown, when I was out with friends or doing something interesting to capture my BeReal — solemn appeal that I am not boring after all.

Should we take BeReal as it is: a place to be real? After all, the app has made its name as a moral opposite to Instagram. BeReal is, befittingly, not like Instagram. In July, the Senate Commerce Committee approved two bills: the Children and Teens’ Online Privacy Protection Act and the Kids Online Safety Act. Before the Senate Commerce Committee last fall, Facebook whistleblower Frances Haugen presented internal documents showing that Facebook knew Instagram can be addicting and increase rates of eating disorders and depression in children and teens. Surprisingly, BeReal does have something in common with other notable social media platforms. Among its 11 official bulleted “WARNING” descriptions, “BeReal can be addictive.” I commend the app’s honesty, but BeReal has unintentionally pleaded guilty.

Despite that, BeReal is certainly a departure from Instagram. Yet, not far off from the “fake Instagram” or “finsta” movement — a trend in which young users reserve an additional Instagram account to a limited and close group of friends — NPR lauds BeReal as “Instagram’s next rival for teens.” A Teen Vogue article writes how the app gives the opportunity for users to “let the world know who you actually are” sans fluff and filter. Skepticism about the app seeped into recent media outlets after R.E. Hawley questioned BeReal’s praise for its authenticity in The New Yorker in May. According to Hawley, what differentiates BeReal from other social media giants “isn’t the former’s relationship to truth but the size and scale of its deceptions.”

Online authenticity is not so much the truth, but a kind of performance. On some occasions, ironically, I would find myself in front of the camera, faced with the urge to contort my face into a smile amidst an unfeeling book or appear graceful before a grapefruit as if I were seducing the fruit. In both scenarios, I am bound by a performance that never ends, in which I am both the cursed actor and director.

In both scenarios, I am bound by a performance that never ends, in which I am both the cursed actor and director.

Before a camera, users are bound to perform. The deception lies in the frame we show the audience. The problem is that these intentional moments — parties, concerts and outings — are simply framed as everyday life. To be warped into this deception is to confront online inauthenticity all over again. And once again I ask myself, “What’s the point?”

A quick scroll through the public “Discovery” page of the BeReal app, akin to the “Explore” [ page in Instagram, is an anthropologist’s dream. A photo of a curtained window on one corner of the room. Another of a blurred dog. Current TV show. Friendly outing. Food. The list goes on. With each photo comes a face as familiar to me as the unnamed characters in my dreams. The totality of it all throws me into a wave of panic, yet fails to bring me to a proper feeling of sonder. Perhaps if I were to pass by a crowd of people on a busy street and a singular BeReal photo sprung up above each of the pedestrian’s heads — a hologram of their distant lives — I would be reminded of how organically boring humanity has become. A digital life so warped into banality and “casual authenticity,” the latter not so much an oxymoron as it is an impossible charade game.

Melody thinks that reality is no different than fantasy in BeReal. What are “BeReal” and “social media” if not a mere paradox?