The Iranian Graduate Student Association at UC Santa Barbara held a protest Friday outside the library following the death of Mahsa Amini, a 22-year-old woman who died Sept. 16 after being arrested by Iran’s “morality police.” 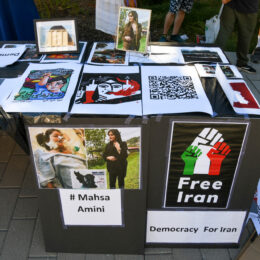 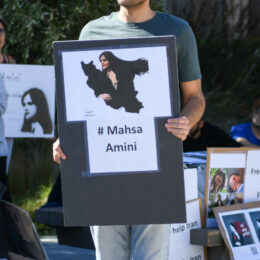 Farshad Sonboldel (he/him), shared his motivation for being at today’s protest by saying that he had been involved with similar protests since his time studying in Iran, and so it was only natural to be involved in today’s demonstration against the tyranny in Iran. Farshad has experience in Persian poetry, and he currently works as a librarian specializing in Middle Eastern works here at UCSB. (Shiuan Cheng / Daily Nexus) 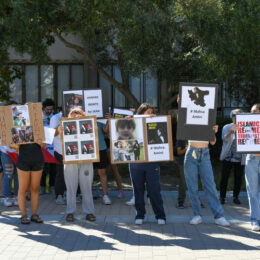 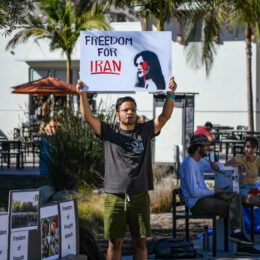 Ali Reza Payandeh (he/him), a post-doctorate researcher working in the Marine Science Institute at UCSB, felt a responsibility to serve as a voice for Iran, where women are not free to dress how they want under Sharia (Islamic Law). (Shiuan Cheng / Daily Nexus) 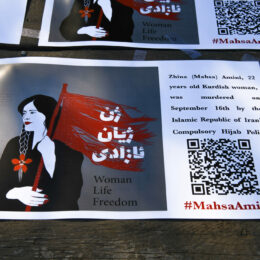 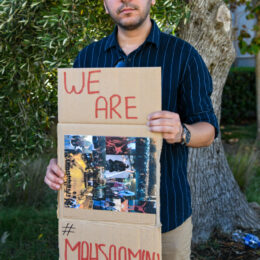 Ryan Solgi (he/him), a PhD student in the Department of Geography here at UCSB, felt compelled to be involved with the demonstration because he believed it to be a battle for freedom and women’s rights. (Shiuan Cheng / Daily Nexus)

“We are here to show our anger, to show our grief, because a 22-year-old girl in Iran has been arrested by police and she has lost her life in custody of police. The police in Iran, they say that they have not killed her, but they are killing people in the streets now,” a protester said.

Amini was arrested on Sept. 13 after allegedly breaking hijab rules that require Iranian women to wear head coverings and died in custody that Friday. Police claim Amini died after being taken to a hospital due to a heart attack, but Amini’s family and eyewitnesses say she was fatally beaten in a police van following her arrest.

A group of roughly 25 protestors gathered before the UCSB Library at 3 p.m. and began the demonstration with a chant in Farsi. Many of them carried signs with phrases like “Freedom for Iran” and “Islamic Regime Terrorist Regime.”

Amini’s death has sparked international protests and online dissent under the hashtag #Mahsa_Amini.

“Women all over Iran are taking to the streets and burning their hijabs. The biggest protest has started in response. We’re here also supporting this movement because our hearts are with our Iranian people, and these chants are in support of them,” one protester said.

The protest was organized by Ali Payandeh, a postdoctoral scholar at the UCSB Marine Science Institute, who said today’s protest was the third of a series of demonstrations put on by the association. The first was a demonstration held on the corner of Storke Road and Hollister Avenue, and the second a vigil held in Isla Vista on Thursday.

“What happened to Mahsa Amini was not exceptional or rare,” Payandeh said. “It’s a routine tragedy which my people, especially women, are suffering everyday and every minute.”

Many of the protesters asked not to be identified due to safety concerns.

“A lot of our student body returns to Iran during student breaks to visit family, and the Iranian government has a lot of ways to figure out who was protesting and what they’re doing, and they could potentially put themselves and their families lives at risk if they’re caught protesting,” one protester told the Nexus.

After the government shut off the internet in parts of Tehran and Kurdistan due to growing Amini protests, several demonstrators spoke on the lack of internet access in Iran, highlighting the need for people residing outside of Iran to spread awareness on the issue.

“If you are a feminist, if you support women’s rights, please speak up about this because Iranians do not have internet access right now,” one protestor said. “Their connection is poor. We are able to speak up for them. So please share on Instagram, Facebook, Twitter, please because this is an Iranian revolution. This is a women’s revolution.”

Payandeh referenced Mona Heydari, who was forcibly married off to her cousin at the age of 12 and beheaded allegedly by her husband at age 17 for attempting to escape him. Her husband carried her decapitated head through the streets of Iran after the “honor killing.”

“This is what’s happening under the Islamic laws in my country, and whenever we want to talk about that, people say, ‘This is Islamophobia,’” Payandeh said. “So when is the best time to talk about women’s rights in Iran? What we are witnessing in Iran is a feminist revolution.”

Payandeh said the group will continue to hold events like the protest in the coming weeks to raise awareness.

“This is a human rights issue,” another protestor said during the event. “If you consider yourself a member of the human race, it is your duty to stand up for injustice, women’s rights and women’s rights across the world. We stand with the women in Iran here today and every day.”