The Daily Nexus
Sports
​​MLB trade deadline is heating up
August 8, 2022 at 7:37 pm by Garret Harcourt

Every year during this week of the major league baseball season there is a variety of teams that are trading away their best players. This is due to the annual MLB trade deadline –  3 p.m. on August 2, 2022. After this deadline, no more trades can take place. With certain teams not being able to compete for a championship, they trade away some of their older talent in order to restock their minor league system for the future seasons to come. 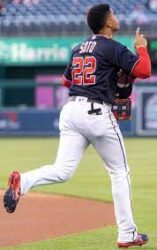 The blockbuster deal everybody is talking about took place between the San Diego Padres and the Washington Nationals. The Nationals offered a max extension to their star player Juan Soto, but to their surprise, he turned down their offer, forcing the Nationals to announce one of the best players in the MLB would be available for trade talks after a dramatic week of speculation.

The frontrunners for landing Soto were the Los Angeles Dodgers, Padres, and the St. Louis Cardinals. In the end, the Padres were willing to offer the most to their top tier prospects as well as willing to part with their best major league prospects and a combination of high-level minor-league talent.

The Padres were able to acquire not only Soto plus but also one the best hitting first basemen, Josh Bell. In return, the Nationals acquired CJ Abrams, Robert Hassell III, Mackenzie Gore, James Wood, Jarlin Susana and Luke Voit. Abrams and Gore are both young prospects who have been in the majors for a majority of the season and should slot into starting roles on a depleted Nationals squad. Voit will move into the vacant first base spot while the others will be developmental prospects as a part of the trade.

The Padres spotted a utility player as they traded for the Cincinnati Reds’ Brandon Drury who is in the midst of having one of his best seasons. In the process, the Padres opened up a roster spot by trading first baseman Eric Hosmer to the Boston Red Sox.

Around the league there has been movement from almost every MLB team, either buying or selling their players. The Philadelphia Phillies in particular have been active this deadline making a flurry of moves. They acquired Noah Syndergaard from the Los Angeles Angels of Anaheim, and in a separate move got Brandon Marsh from the Angels in exchange for their former number one overall pick, Mickey Moniak.

The New York Yankees did some moving on the final day, trading away the struggling Joey Gallo and their veteran pitcher Jordan Montgomery. In exchange they picked up Harrison Bader from the Cardinals, which comes after acquiring Frankie Montas the prior afternoon.

The Minnesota Twins made sneaky moves getting Tyler Mahle from the Reds who has been a solid starter, and All-Star closer from the Baltimore Orioles. They weren’t done there, as they traded for Detroit Tigers’ veteran pitcher Michael Fulmer.

The Dodgers took in Joey Gallo from the Yankees but in the process managed to trade away their hot-hitter Jake Lamb and young pitcher Mitch White.

In a buzzer beater deal right before the trade deadline came to a close the Atlanta Braves swooped in on the Angels’ fire sale, signing their talented closer Raisel Iglesias. The Toronto Blue Jays were also trading up until the deadline and were able to swoop longtime Kansas City Royal, Whit Merrifield.

This year’s MLB trade deadline comes to a close but expect many more moves as teams release and designate players for assignment to make room for their new players.