While there are many methods of measuring political engagement on our campus, the political donations of UC Santa Barbara professors are a metric that we can track using publicly accessible data. This information was collected by the Federal Election Commission from political organizations, and includes the employment, occupation and other demographic information of political campaign donors. We tracked these donations over the time period from 2015 to 2021.

Our data included donors who self-reported their employer as “University of California,” “UCSB,” or “UC SANTA BARBARA,” and had addresses in one of 10 local area codes. This meant that some donors in the data set were not professors. However, this did not significantly impact any trends, because the majority of reported occupations were “Professor” or some variation of a teaching occupation.

How much do most professors donate? 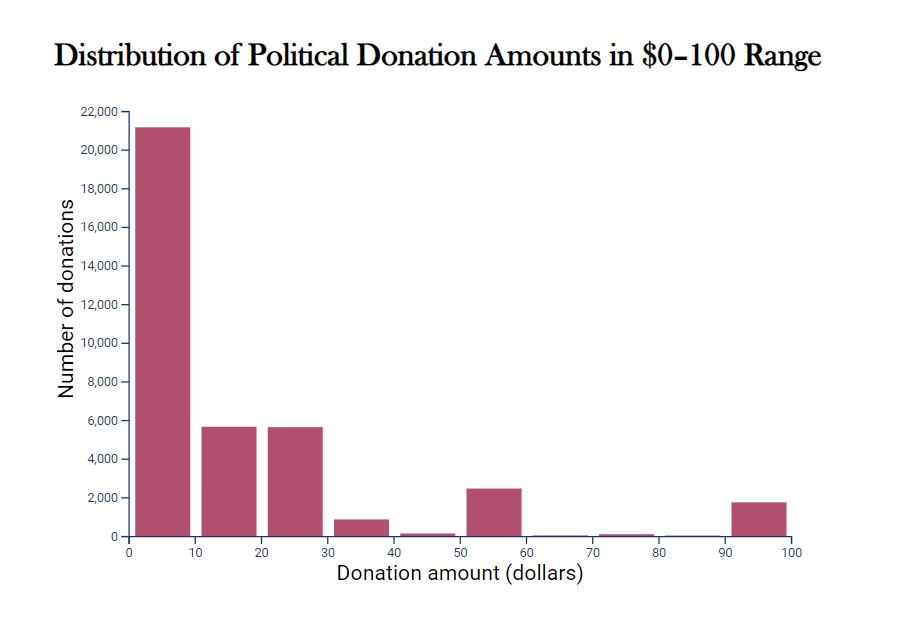 Almost all donation amounts were in the $0-100 range, although the highest single donation was $2,500. The majority of donations were less than $10, which could indicate that the majority of UCSB professors were only weakly committed to supporting political organizations. However, when combined with trends in the volume of donations as discussed below, this points instead to consistent support through small recurring donations.

Which political organizations are receiving this money? 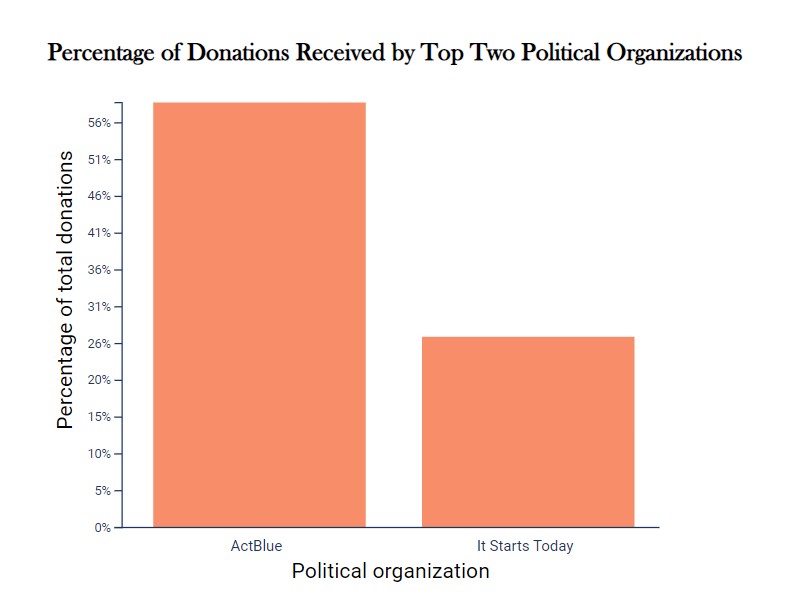 More than 80% of the money donated went to two organizations: ActBlue and It Starts Today. ActBlue was founded in 2004 and is a fundraising platform for Democratic candidates. ActBlue also caters to small-dollar donors, and each contribution made through ActBlue is earmarked for another campaign and still considered an individual donation. The other major recipient, It Starts Today, was founded in 2017 to crowdsource support for Democratic candidates. 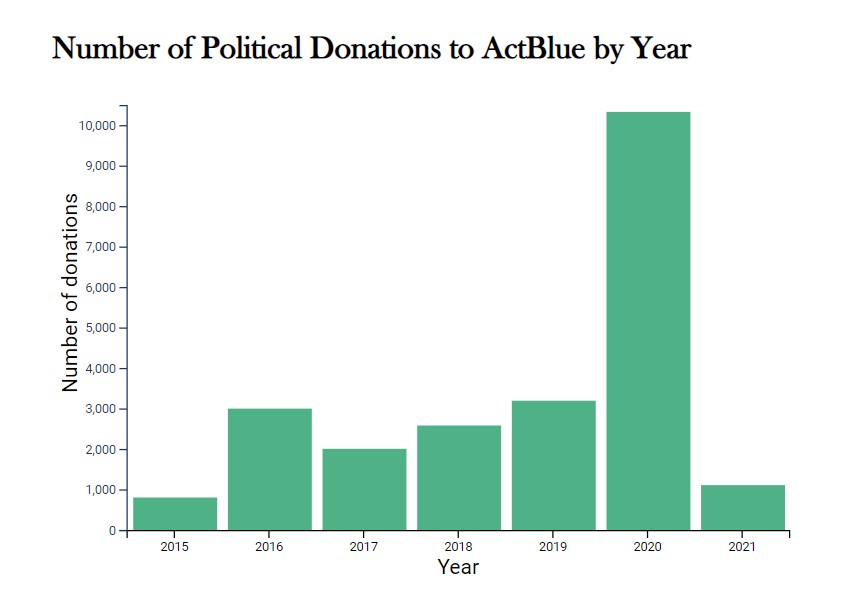 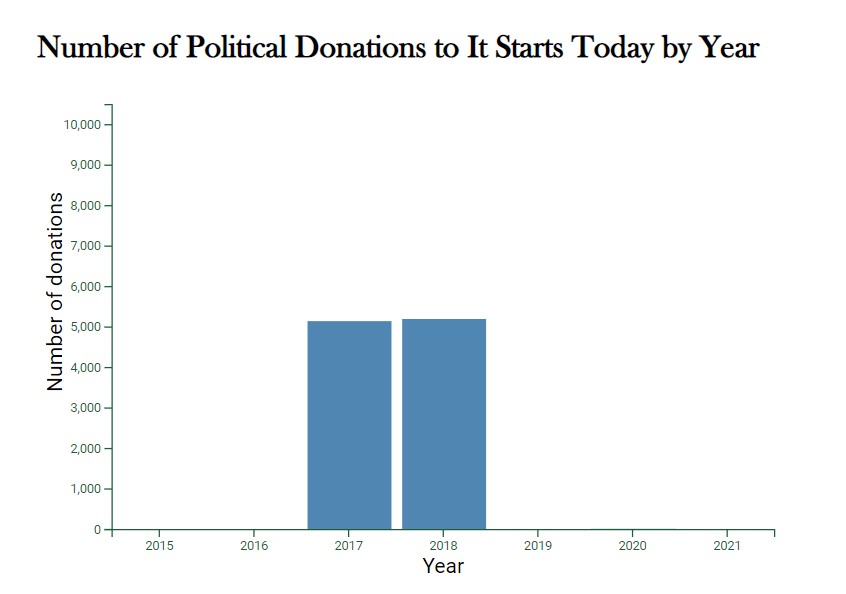 Donations to It Starts Today followed an unusual pattern over the years, with a sharp increase in donations beginning in 2017, holding steady in 2018 and decreasing to almost nothing in 2019. As expected from a presidential election year, ActBlue received the most donations in 2020 – the number of donations spiked that year. As shown in the previous two charts, the increase in our data was largely driven by the trend in donations to ActBlue.

How did the number of donations change over time? 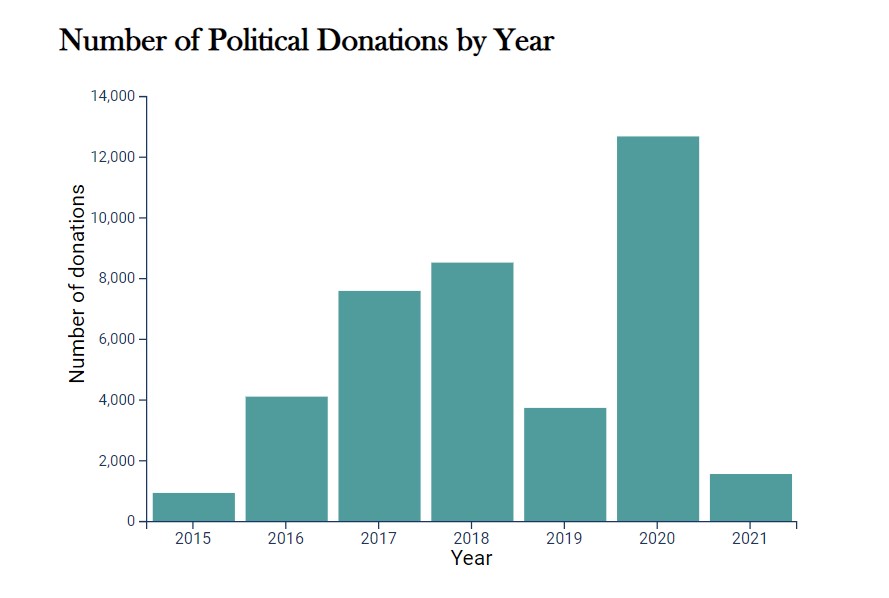 There was also a larger number of donations in 2017 and 2018, which was driven by increased donations to It Starts Today. This organization operates on a system of small monthly donations, which are then held for Democratic nominees in the next election cycle. Donors who were galvanized into action by the results of the 2016 elections likely wanted to put their money to use right away. This caused a large number of donations to It Starts Today in both 2017 and 2018, instead of the more expected pattern of increased donations only in election years as seen with ActBlue. The popularity of It Starts Today likely waned for subsequent election years due to Democratic success in 2018.

The majority of donations in our data were sent to two organizations focusing on individual contributions, showing that the politically engaged UCSB community was progressive-leaning and interested in grassroots change.