The Daily Nexus
Sign of the Times
Crypto, a Lesson in America’s Decline
June 24, 2022 at 3:09 pm by Blake McQuilkin 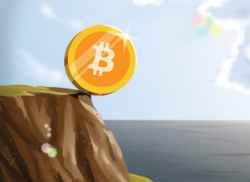 How the mighty fall, and in spectacular fashion.

For the last few months, major players in the cryptocurrency market, such as Bitcoin, Ethereum and Dogecoin have gone into free fall. Crypto has been consistently losing value, a trend which seems to have been exacerbated by the sudden demise of Terra (LUNA) (now rebranded as “Terra Classic”). Terra Classic plummeted from around $80 in early May to less than one-thousandth of a penny at the time of this writing.

LUNA’s creator, Do Kwon, alluded to this death spiral in May when he commented on the oversaturation of the cryptocurrency market, stating that it would be fun to see these new emerging coins “die.” I suppose he didn’t think his own currency would accompany such a group only a week later.

Kwon then led a rapid attempt to resurrect his crypto in the form of a new currency, LUNA 2.0. It immediately lost over 80% of its starting market value. I think the market speaks for itself.

Unfortunately, the Dow Jones Industrial Average, NASDAQ Composite Index  and the S&P 500, three of the most reliable markers of the health of the U.S. stock market, have also seen nearly consistent losses these past months, plunging further and further into the red.

While many factors are at play, the cryptocurrency and stock markets seem to have a terrible influence on one another. As one goes down, the other drops as well — both are playing the ultimate game of chicken with one another. However, instead of driving their own car off a cliff, these savvy investors have their hands on the wheel of the entire U.S. economy. A prospect that, logically, would devastate not only American citizens but also the global market. Quite a funny way to plunge into a new depression.

However, instead of driving their own car off a cliff, these savvy investors have their hands on the wheel of the entire U.S. economy.

To get to the meat of this crypto apocalypse, it has to be said that these currencies stand upon pillars of sand. Like any speculative market, money is built on trust. If someone trusts Ford Motor Co. to make reliable vehicles that sell, then Ford becomes a potentially worthwhile investment. However, Ford is a company — it has physical products, conducts research, develops technology and has a profit margin. Crypto does not.

When an investment has absolutely no markers for success and remains entirely speculative, then you need trust. Bitcoin costs as much as it does because people perceive it not only as valuable but also trustworthy. From its height at $68,000 USD in November 2021, plummeting to around $20,000 today, it’s evident that investors have lost trust.

What then, is the lesson to be learned from all of this? Should it be seen as a retelling of the tale of Icarus? Are we watching a crypto billionaire, once again, flying too close to the sun, only to drag his industry down with him? Possibly. What I contend that American society should learn is this: Get out now.

The United States used to produce. Its economy used to be based in the physical world, making products that had use and meaning. If its mindset as a society moving forward is to go further and further into the false promises of unending digital capitalism, it will fail. There cannot be growth based on the whims of the stupidest investors this nation has ever produced. You simply can’t base an economy on hope, let alone a currency.

As a young man, I don’t have a lot of hope in my country right now. When the primary avenue to obtain wealth is through digital apes and whatever latest scamcoin™ is dominating the market, then I’ll be the first to throw in the towel and say that this isn’t working. When the only money-making investments left rely not on physical products but on digital intuition, I don’t expect the unfettered capitalism of the United States to last.

For the love of God, let’s let the bitcoin billionaire dreams go. The time has long passed.

Blake McQuilkin believes that the cryptocurrency market’s decline is a trend that will ultimately continue.

I am making $92 an hour working from home. i was greatly surprised at the same time as my neighbour advised me she changed into averaging $ninety five however I see the way it works now. I experience mass freedom now that I’m my non-public boss.
That is what I do… http://www.richzone9.com

I have made $100 every hour in one day.That was my ideal day in my life and my boss was very content with me..CNN is additionally intrigued from my work and is very happy..check further subtleties by open the underneath site..
Go to this link…………… https://www.WORKSCLICK.Com