With UC Santa Barbara’s academic year coming to a close, Gaucho Underground Scholars hosted a graduation gala on May 28 from 4:00 p.m. to 8:00 p.m. at the Corwin Pavilion to celebrate the organization’s graduating seniors.

Gaucho Underground Scholars is a campus organization established at UCSB in 2019 that works to provide peer-driven support and guidance to formerly incarcerated and system-impacted  students. 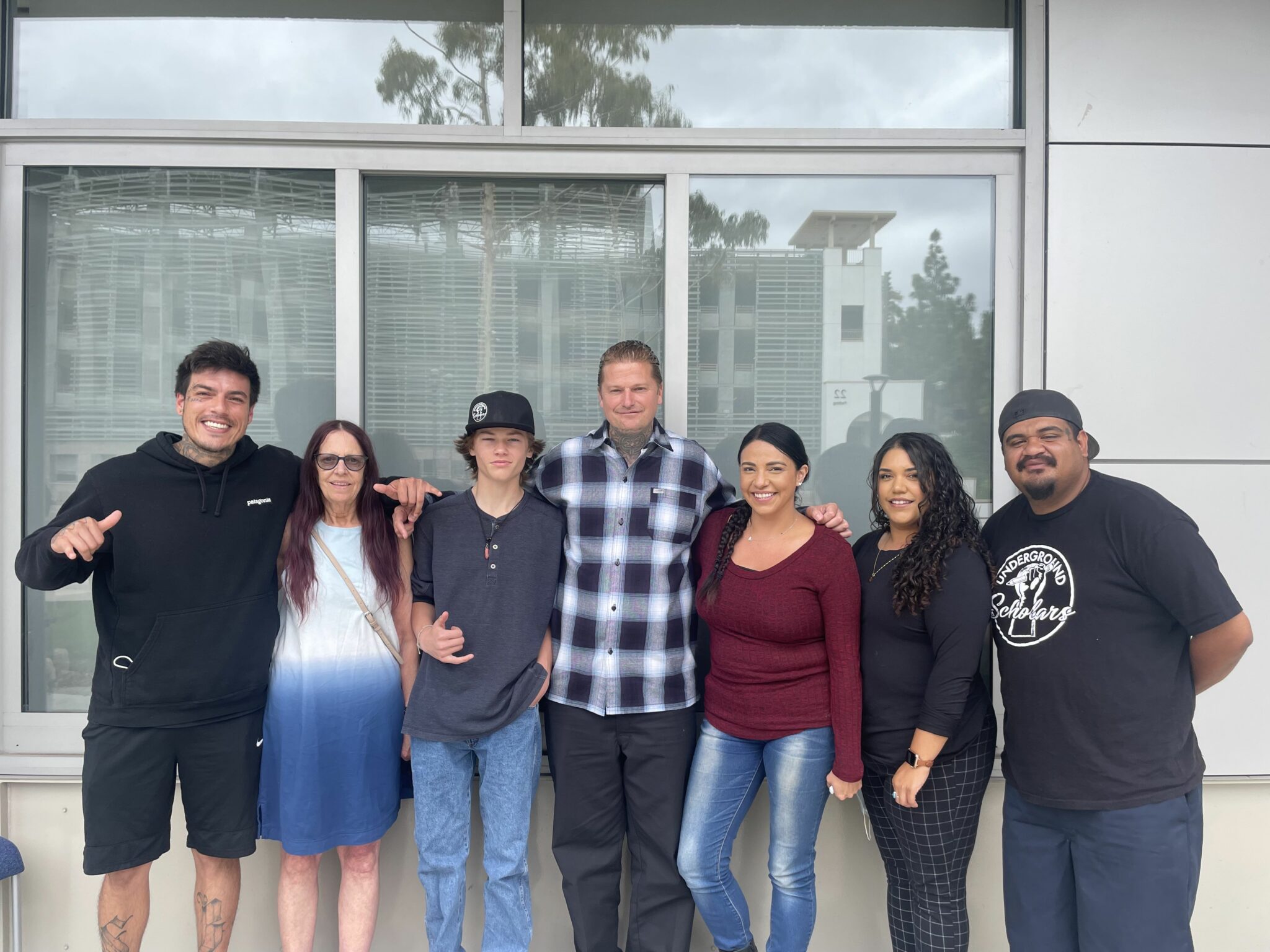 The Underground Scholars community then had dinner, listened to graduate speakers, conducted the graduate ceremony and danced the night away. Asumi Shuda / Daily Nexus

“It is our aim to connect formerly incarcerated UC Santa Barbara students with the resources and information that may help to increase those students’ prospects of success,” the website’s mission statement read.

The gala then moved into a documentary screening that illustrated the efforts being made to dismantle the school to prison pipeline.

“It’s going to show the work that it takes to build the prison-to-university pipeline and reverse the school-to-prison pipeline,” second-year Chicanx Studies major Juan Bran-Gudiel said.

The Underground Scholars community then had dinner, listened to graduate speakers, conducted the graduate ceremony and danced the night away.

“Recently, we got grants from the Mellon Foundation and the Crankstart Foundation, and those grants allowed us to now hire student workers and gave us some funding,” Ryan Rising said. “With that funding … we wanted to pretty much copy the Berkeley Underground Scholars model of the graduation, and we wanted to implement that graduation here at UCSB.”

Bran-Gudiel spoke to the importance of celebrating graduation for the seniors of Underground Scholars as formerly incarcerated individuals in an institution he says is actively working against them.

“It came to just celebrating the minor achievements,” Bran-Gudiel said. “If we don’t do it to ourselves and we don’t celebrate our own achievements, the institution is not going to do it.”

Fourth-year sociology major Melissa Ortiz echoed Bran-Gudiel’s sentiment, saying that the weight of graduating from UCSB is heavier for the program’s seniors as people personally impacted by the prison system.

“We’re not just walking along the stage with all the other students that are graduating,” Ortiz said. “This gives us an opportunity to celebrate ourselves and all the work that we’ve done on campus.”

The seniors of Underground Scholars not only celebrated their graduation by dressing up for and dancing at the ceremony, but also through receiving commemorative items like class rings. Ryan Rising spoke to the importance of giving seniors this experience, one that many of them were unable to participate in during high school.

Ryan Rising said that the graduation of the Underground Scholars seniors not only symbolizes the accomplishments they achieved during their undergraduate education but also marks how far they have personally come since being incarcerated.

“We did it,” Ryan Rising said. “We overcame drug addiction, we overcame recidivism and recidivating back into the system multiple times. We overcame all that.”

“We came in, we got our bachelor’s degrees, and we worked hard, and now three out of the five that are graduating this year are heading to Ph.D. programs,” he continued.

Graduates in  Underground Scholars all shared their future endeavors following their graduation from UCSB. Fourth-year sociology major at Santa Barbara City College Lisandra-Barrera Rising said upon graduation, she wants to pursue her passion for social work and therapy and continue the work of helping others she’ conducted as an Underground Scholar.

“Being a social worker will give me more opportunities in doing what we do now — allocating resources to people that need it,” Lisandra-Barrera Rising said.

“Being incarcerated and being system impacted — it just affects whole entire generations,” Lisandra-Barrera Rising said. “Families are always interrupted and displaced … So if we can have more therapists that are culturally sensitive to these families, then we could probably see a lot more families staying together despite the circumstances that they’re going through.”

Ortiz said she will be pursuing a master’s degree and will likely pursue a Ph.D. program thereafter.

“I’ll be pursuing my master’s in leadership and higher education,” Ortiz said. “Then from there, I’ll see if they have a Ph.D. program.”

Though not graduating, Bran-Gudiel said he plans to spend his third year at UCSB preparing for his senior thesis in the Chicanx Studies department.

“I just found out that I got accepted into my third year, so I’ll be continuing with my third year in applied psychology,” Bran-Gudiel said. “I’ll be using most of my time just getting my thesis ready and my own research ready … and hopefully in the fall, I’ll be applying to the Ph.D. program here at UCSB for the Chicanx Studies program.”

Ryan Rising said upon his graduation, he will be working toward getting a Ph.D. in criminology, law and society at UC Irvine and will be individually working with formerly incarcerated individuals to mitigate violence and fight against the school-to-prison pipeline.

“I’ll be working on developing a credible messenger style program by working with formerly incarcerated individuals in the surrounding area of UC Irvine, Santa Ana, Orange County, LA and San Diego and working to mitigate violence, uplift youth that are impacted by the system,” Rising said.

Fourth-year communications major Luis Muñoz said he hopes to open a gym locally after graduating with the aim of increasing accessibility to health and wellness services.

“[I’m going to] open up a gym and offer health and wellness services to low-income families in Santa Barbara,” Muñoz said.

Ortiz expressed her personal motivation behind completing her degree as a formerly incarcerated individual.

“I come from a background where so much has been taken from me — my freedom, my dignity, my pride, my kids,” Ortiz said. “So for me, the motivation behind getting a degree has been, ‘I’m putting in this work. This is something that’s mine and this is something that nobody can ever take away from me.”’

Muñoz emphasized that there is a place for everyone in higher education no matter what background one may come from.

Bran-Gudiel said that the graduation of the seniors in Underground Scholars opens a path for future students of disadvantaged backgrounds who also want to pursue a bachelor’s degree.

“We’re the credible messengers,” Bran-Gudiel said. “We’ve been there, done that, and we’re playing out the blueprint for these individuals and as long as they can follow that blueprint … They can have a sustainable life.”

Rising reflected on how far he has come as not only a UCSB student but also as an individual with his own dreams and aspirations.

“I’ve been able to show my straight A’s to my kids, and now my kids fight for straight A’s and they fight to do well in school instead of being out in the streets, selling drugs, getting high, gangbanging and doing all the stuff that I used to do,” he said. “I’ve been able to redeem myself in a way to show them something different.”

“I’ve been able to reclaim my whole entire life,” Rising continued. “I’m no longer addicted to drugs, I got my life and I got my kids living with me, I got family housing and I’ve been able to get back with my kids, build that relationship.”