The Daily Nexus
Sports
The Best is Yet To Come for Gauchos Baseball
May 31, 2022 at 1:47 pm by Garret Harcourt

The regular season has come to a close for the baseball team and they ended their season with a bang. Not only did the team sweep UC Riverside this weekend, but this sweep was the clincher that propelled them to take home the Big West conference title. 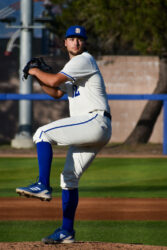 The Gauchos ended Game 1 against UCR in dramatic fashion, coming back from a deficit in the 9th inning to walk it off with a sacrifice fly from sophomore infielder Jordan Sprinkle. The following two games from the Gauchos were far from close contests, ending Game 2 with a score of 6-0 and Game 3 with a score of 14-2. Stellar pitching in these games came from sophomore pitcher Mike Gutierrez and freshman pitcher Ryan Gallagher.

Senior day did not disappoint as a plethora of players had an outstanding hitting day. Sprinkle, who is an MLB draft prospect, ended his career on a high note contributing with 4 runs batted in and a triple. Senior catcher Mason Eng started his first career collegiate home run in his final regular season game. Senior outfielder Jason Willow and junior outfielder Broc Mortensen also had themselves a day, swiping two bases each contributing to the Gauchos 10 stolen bases on the day.

As for the Gauchos, this marks the third straight 40-win season (excluding 2020 when the team’s record was 13-2) as they eclipsed the mark on their very last regular season game. This game also secured the Big West Title and secured the Gauchos a spot in the NCAA Division 1 Baseball Championship regionals.

Next up for the Gauchos is either hosting the regionals at their home stadium or traveling to another school to take part in the regionals. If the Gauchos come out on top of their bracket, they will take a trip to Omaha to compete in the NCAA Division