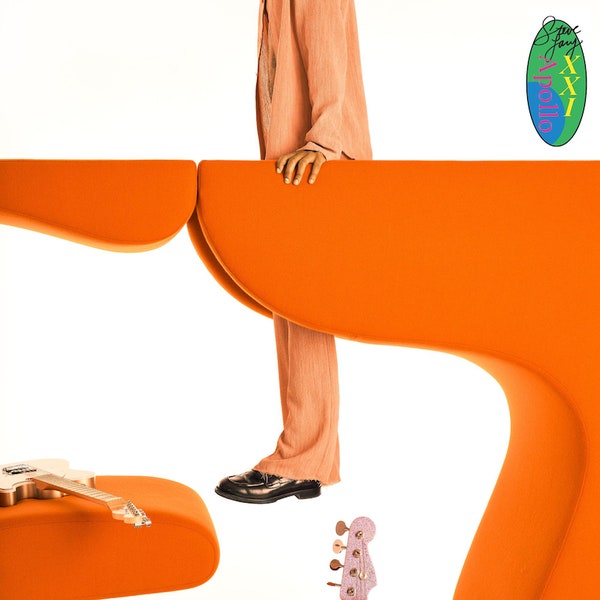 “Apollo XXI,” American singer-songwriter Steve Lacy’s first studio album, proved itself as a beautifully-crafted, fun collection of songs with each track bringing bright and exuberant energy. This is the quintessential summer album — from the techno beats to the album cover’s bright orange, couch-looking structure. Released on May 24, 2019, the day following Lacy’s 21st birthday, “Apollo XXI” serves as a heartfelt, yet laid-back album that reveals Lacy’s deeper feelings about his sexuality. In an interview in 2019 about the album, Lacy said, “It’s basically my journey, my sexuality. But in a very fun and witty way, it’s not really that serious, it’s not super sad. I think it’s my journey, it’s an expression of how I feel right now.”

The album’s opener, “Only If,” features Lacy’s reflective lyrics about growing up and wishing he didn’t take everything so seriously. He sings, “If I could travel through time, I think I / Would tell myself from the past, ‘You’ll be fine.’” The proceeding track, “Like Me,” details Lacy coming to terms with his sexuality. He sings, “How many out there just like me? / How many work on self-acceptance like me? / How many face a situation like me?” This track features vocals from Los Angeles singer DAISY WORLD, who has been growing in popularity recently, most notably with her 2021 feature on “RISE!” from Tyler, the Creator’s album “Call Me If You Get Lost.”

The album’s third and fourth tracks, “Playground” and “Basement Jack,” bring that same colorful energy that the first two songs do. “Guide” has a ’70s funk-rock feel to it, with incredible guitar and drum instrumentation. The following track, “Lay Me down,” feels especially ’70s, with explicitly sexual lyrics and lustful recounts of a memorable sexual experience that Lacy has had. Over a funky beat, the album’s seventh track, “Hate CD,” tells a passionate story about the obsession we sometimes experience with the ones we are attracted to. Lacy sings, “I yearn for his affection / ’Cause I’m addicted to this drug.”

The album’s eighth and ninth tracks, “In Lust We Trust” and “Love 2 Fast,” reveal the painful conflict between love and lust. A standout of the album, “Love 2 Fast” features lyrics such as, “Fuck, why is falling in love so hard? / I think I’m just moving too quickly / Based on the patterns I’ve been studying on myself / Of the most scientific research and I think / That I should just take things a little slower.”

The following track is an interlude produced by actor Amandla Stenberg. It’s a peaceful track with calming string instrumentation. The 11th track on “Apollo XXI,” “N Side,” is undoubtedly the album’s most overtly sexual track. Lacy describes his sexual attraction to a girl who he also has intimate feelings for. Lacy sings, “But I guess I’d just really like to know if / You feel the same way about me as I feel about you / You know all your feelings for me inside of your heart.” This is an all-too-familiar feeling for young adults; how do you organize and compose your feelings for someone you’ve been sexually involved with? How do you move beyond the usual shallowness of sex?

The album’s closer, “Outro Freestyle/4ever,” samples a portion of Solange’s “Exit Scott (interlude),” a track that Lacy himself produced on her 2019 album “When I Get Home.” This track is the perfect conclusion to Lacy’s freshman studio album. “Apollo XXI” details all of the intimate, inward parts of your early twenties, from sheer promiscuity to the yearning for intimacy for the ones you love deeply.