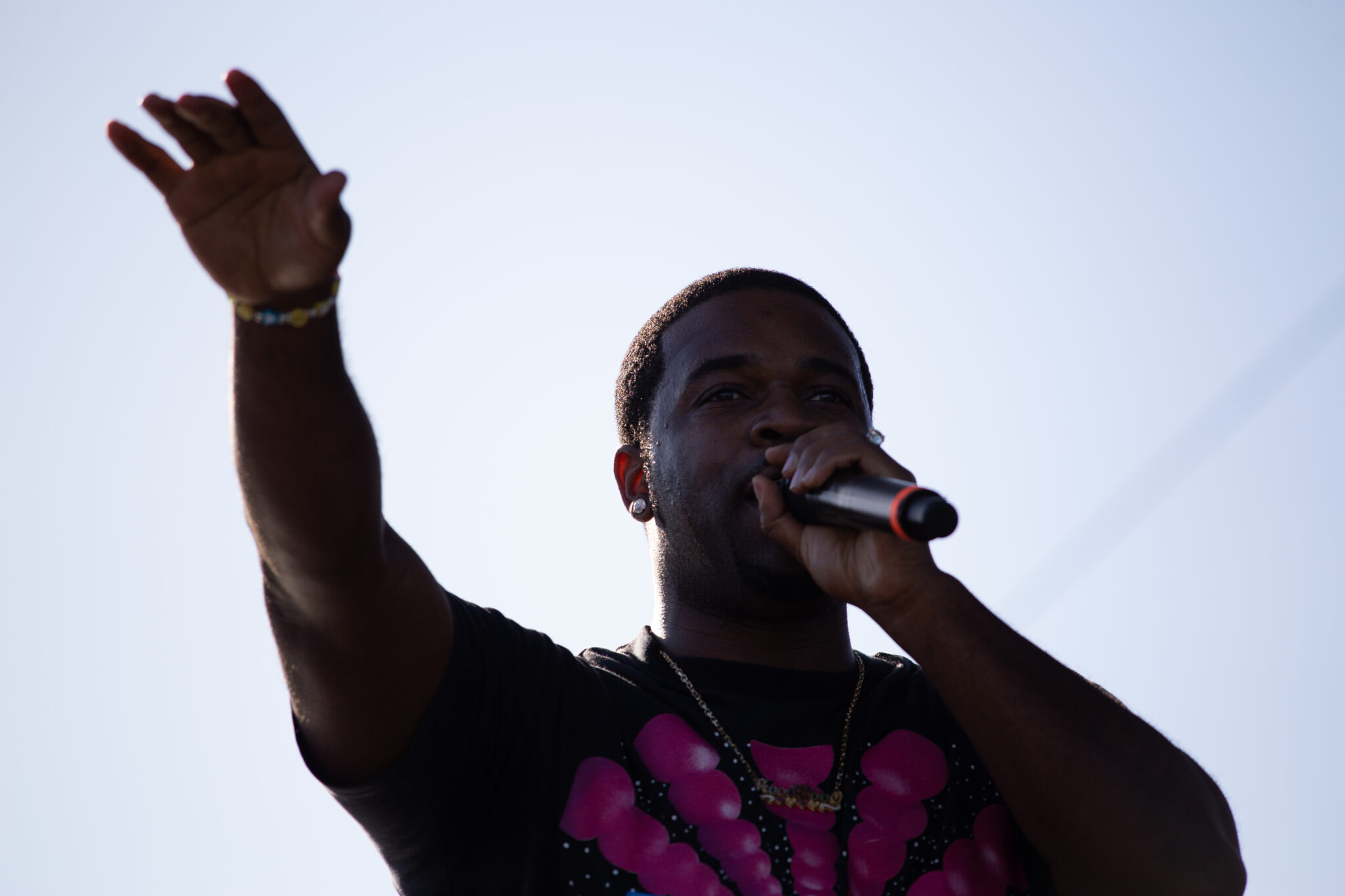 Around 2 p.m., the festival kicked off with the winner of the A.S. Program Board’s Battle of the DJs earlier this year: disc jockey Sush Choi, third-year computer science major Soohyun Choi. As Extravaganza attendees were trickling into Harder Stadium, Choi’s set began attracting event-goers to the stage area at the end of the field.

Harder Stadium was filled with professional and student vendors, along with a photobooth and a face-painting booth that were the most popular as the lines grew across the stadium field.

With past Extravaganza headliners including the likes of Playboi Carti and Aminé, many UCSB students had high expectations for the lineup. About a week before Extravaganza, A.S. Program Board released the lineup at the Arbor — which resulted in mixed responses among the student body.

“I thought ‘Oh is that it?,’ not trying to be mean … I only know Dayglow so I was like ‘Ok I might as well come he’s the only person I know,’” said Daniela Zarate, a second-year math major who attended the event for the first time with her friend whom she met working for at Portola Dining Commons. “After [he performs], I’m just gonna vibe,” Zarate said.

On the other hand, there were those who eagerly anticipated the lineup.

“I personally love it because I know every single artist,” said Paul Song, a fifth-year economics and statistics double major. Song has three Extravaganzas under his belt, and his friend Andrew Chan was at Extravaganza for the first time. “[It’s] a very diverse lineup, we got some house, we got some rap, we got some indie. It’s gonna be a fun time,” said Chan, a second-year communication major.

Right before 3 p.m., a member of A.S. Program Board arrived on stage and took the mic. As Extravaganza-goers anticipated an announcement of the official lineup to begin, it was announced that “due to technical difficulties outside of the artist’s control,” Audrey Nuna would not be able to perform. However, A.S. Program Board hopes to bring the R&B artist to UCSB later this year. Yet, the mood wasn’t allowed to dim as Valentino Khan was announced as the first artist to take the stage.

The Los Angeles DJ played some of his original songs, like hits “Your Body” and “Move It,” along with with remixes of popular, upbeat songs like the Black Eyed Peas’ “My Humps, ” YG’s “BIG BANK” Vengaboys’ “We Like to Party” and Technotronic’s “Pump Up the Jam.”  Khan also utilized the two video screens set up by the stage, which flashed images of his face on different backgrounds and bodies. 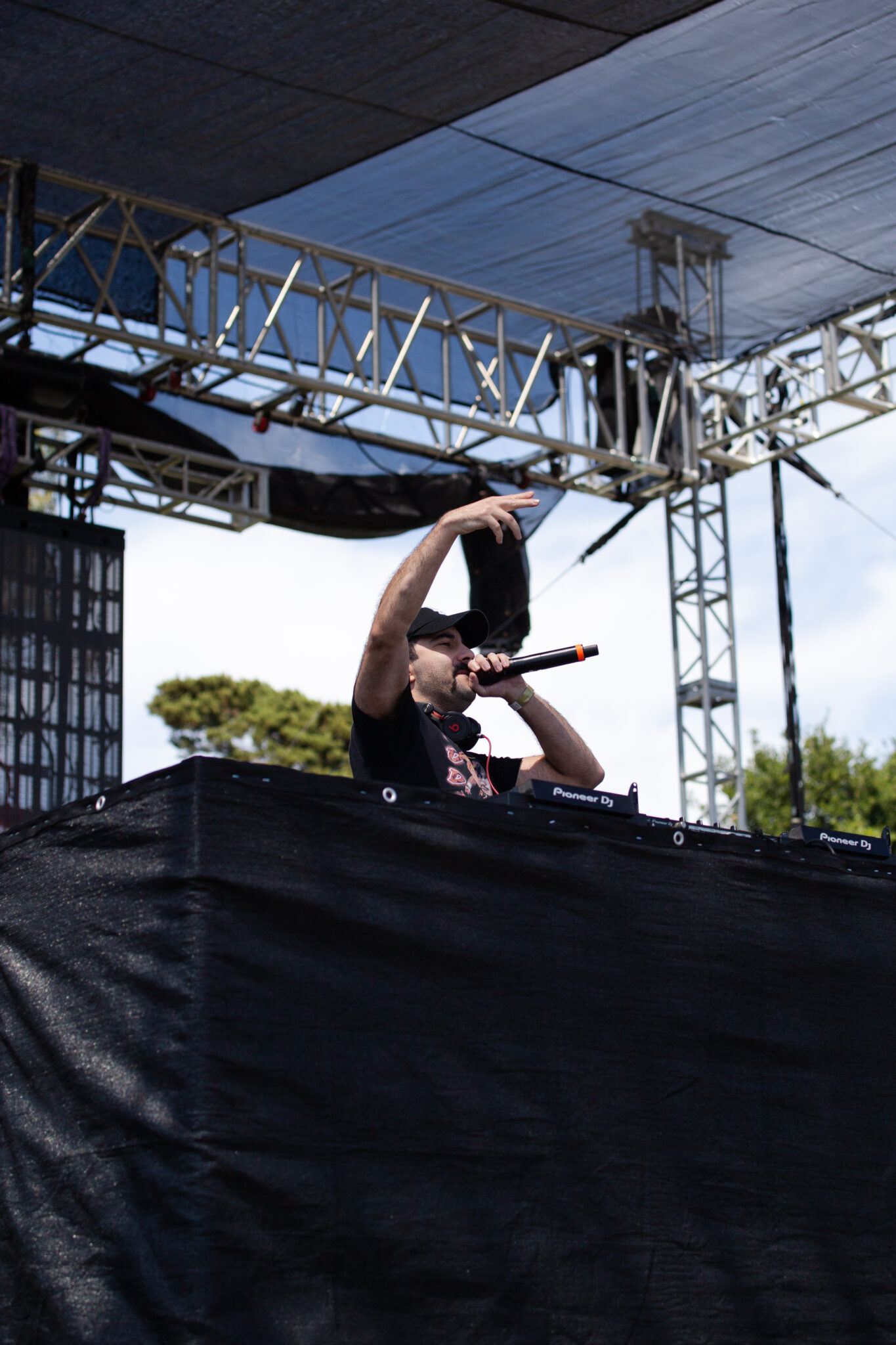 “I listened to some of his music because I checked out the AS Program Board’s playlist so I could get familiar with the artists I didn’t know and his music is fun and silly; there’s fun transitions and remixes,” Sacluti said about Khan’s set.

“He’s really funny and [his set is] really ‘never let them know your next move,’ he’s playing a lot of music,” Grisco added. Grisco had further thoughts on the overall festival, feeling there were limited activities for students to participate in, along with limited food options.

“This is pretty mid, I’m not gonna lie … maybe they blew their budget on the artists,” Grisco said.

After Khan’s set there was time for attendees to roam around the festival. Sarah Mohabeer, a fourth-year microbiology major who attended with her roommate, was eagerly waiting for Dayglow to perform.

“We found out about [the lineup] yesterday … and we’re really excited about Dayglow,” Mohabeer said.

A little after 4 p.m., without announcement, indie-pop band Dayglow jumped into their set performing “Something,” an ’80s-sounding track from their most recent album “Harmony House.” 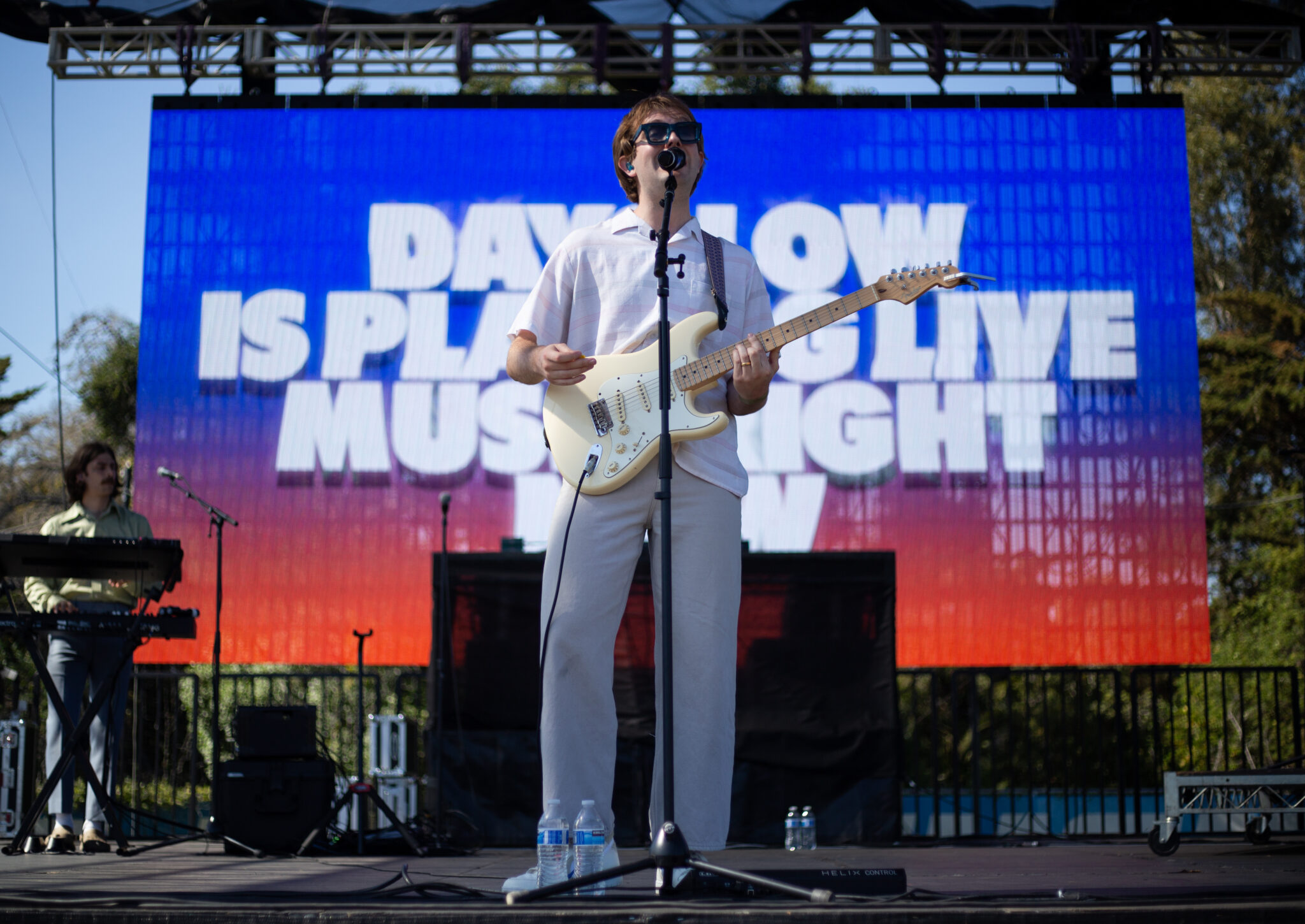 More people, with some even running, made their way to the stage as the music filled the stadium.

In between songs, lead singer Sloan Struble took time to converse with the crowd. The 22-year-old singer shared that he started making music as a college student, and he asked what the mascot for UCSB is.

As the crowd attempted to shout “Gauchos,” Struble removed his earpiece to try to hear more clearly. “Cowboys? What do you say, ‘Go cowboys?’” Struble asked the crowd.

The band’s performance of their breakout song “Can I Call You Tonight?” captured the attention of the crowd, with many singing along or swaying to the music.

Dayglow concluded their set by performing their rendition of “Everybody Wants to Rule the World” by Tears for Fears, which then transitioned into their track “Run the World!!!” an upbeat song that got the crowd jumping and livened up the Extravaganza energy as the heat poured on. 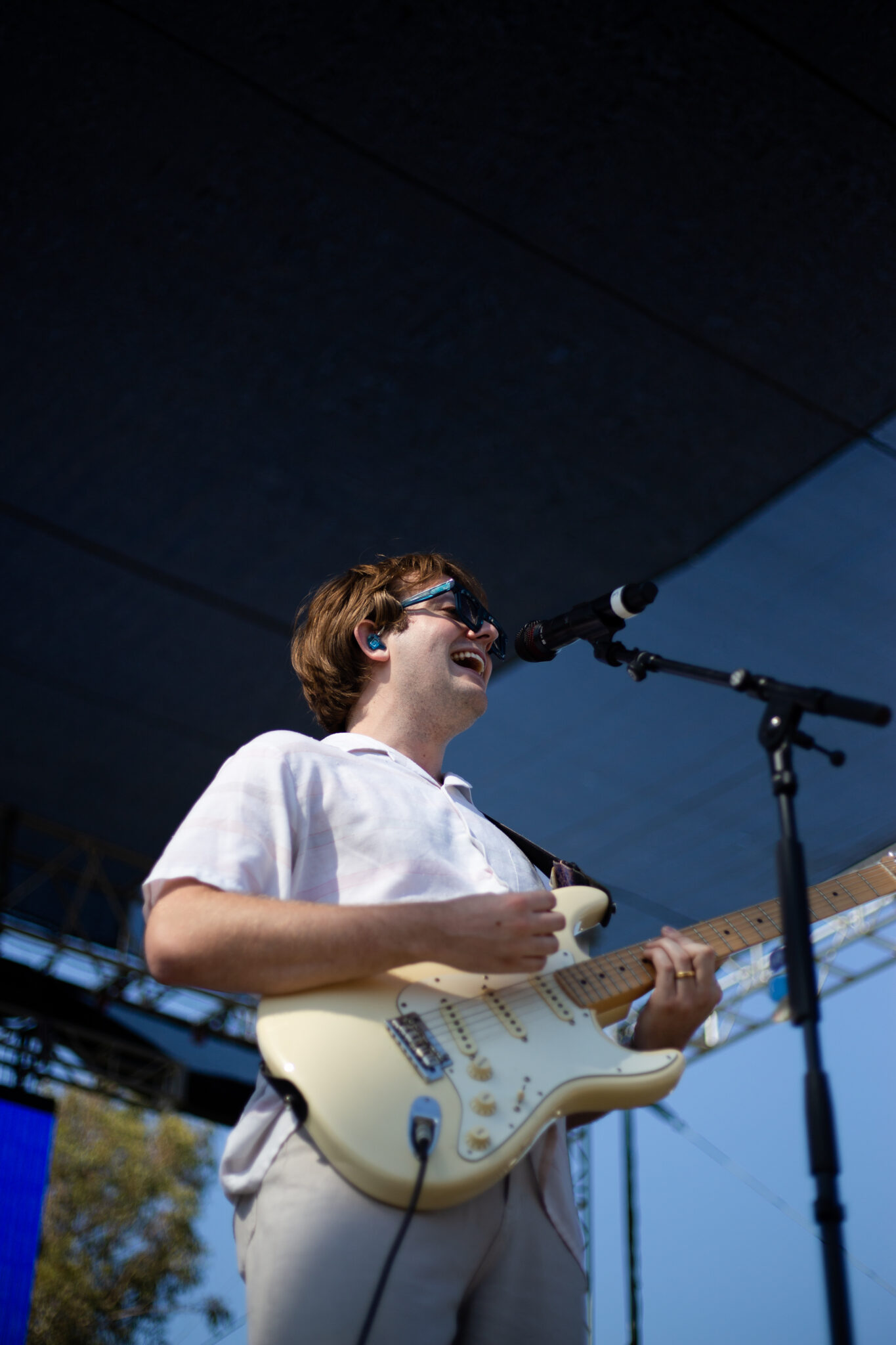 “The environment” brought friends Madigan Boborci and Maddie Cunningham to Extravaganza, to “[be] able to celebrate and shit.” “I didn’t get to go my first year because of COVID, so I’ve been waiting for three years,” said Boborci, a third-year aquatic biology major. “I’m excited for all of [the artists], I don’t really know them, but I’m excited to hear them … I’m excited to add more people to my playlist,” said Cunningham, also a third-year aquatic biology major.

Around 5 p.m., the crowd around the stage was growing. Around 5:30 p.m., A$AP Ferg’s disc jockey TJ Mizell arrived on stage. Mizell asked “USCSB” how it was feeling, and among the cheers and roar of the crowd, UCSB students who caught the slip-up laughed among themselves.

He then said that the audience was at a 6 and needed to get to a 10 to welcome one of the founding members of hip-hop collective A$AP Mob.

Then, Ferg burst onto the stage, and immediately went straight into his set, playing hits like “Work” and “Jet Lag.”

The East Coast rapper pointed out that UCSB has a lot of fine ladies and joked with Mizell that they need to enroll in the school. He then transitioned into “Dreams, Fairytales, Fantasies,” a groovy hip-hop song that fantasizes about his experiences with women.

Ferg continued to engage with the crowd and jumped down to the pit to sing along with students while Sheck Wes’s “Mo Bamba” and then A$AP Mob’s “Yamborghini High” blared from the speakers and mosh pits broke out. 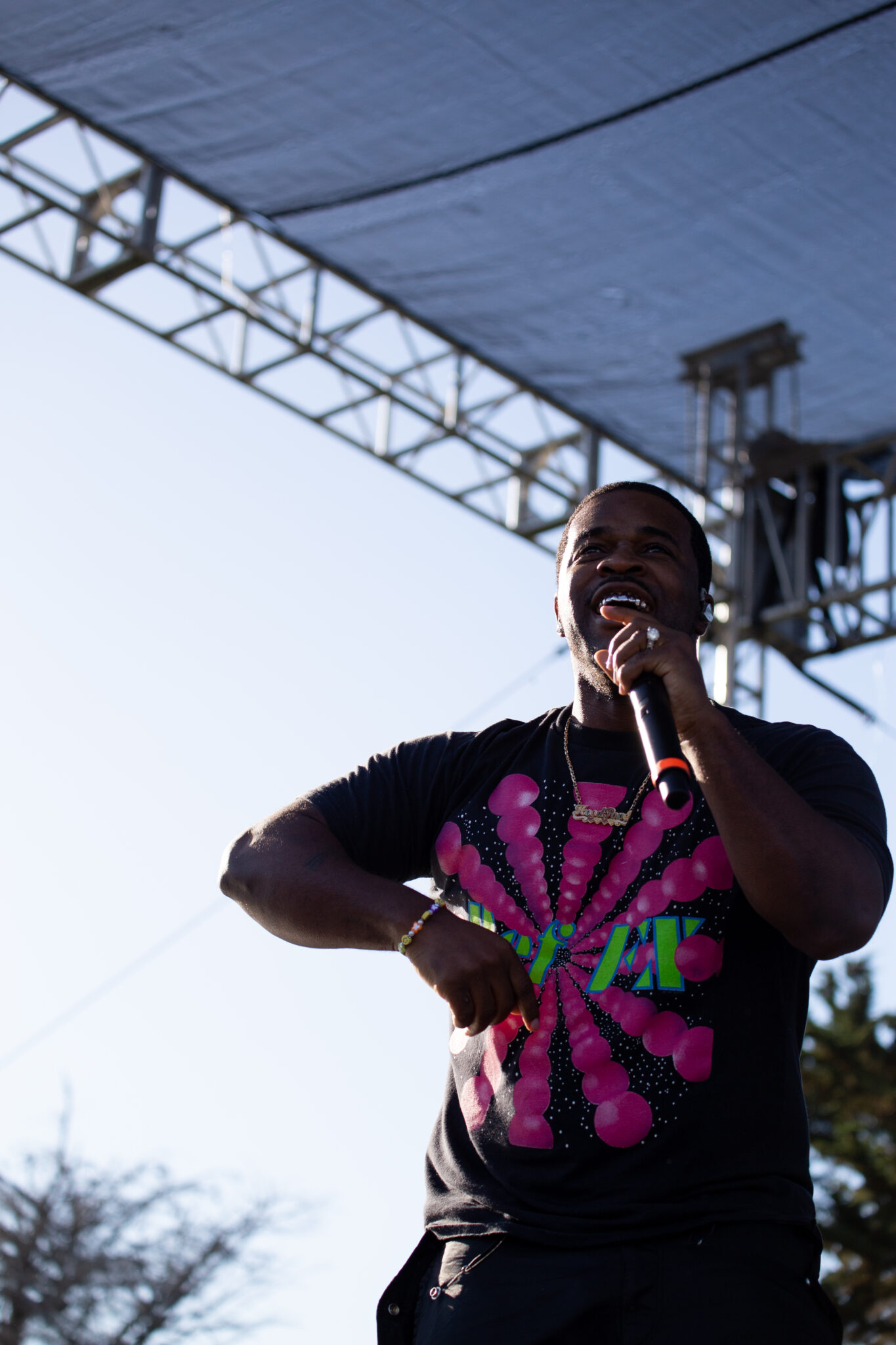 Ferg shared that he wished he could perform more songs and then closed his set — and Extravaganza — with one of his most popular songs, the hard-hitting 5x Platinum “Plain Jane.”

The energy was electrifying, with the crowd shouting the chorus, “Ride with the mob, Alhamdulillah / Check in with me and do your job / Ferg is the name, Ben Baller did the chain / Tourneau for the watch, presi Plain Jane.”

While there were doubts about the lineup, the artists brought their energy to UCSB and actively engaged with students, adding another Extravaganza to the books.