Planned Parenthood of California Central Coast hosted a march in downtown Santa Barbara on May 14 following the leak of the Supreme Court draft majority opinion to overturn Roe v. Wade — a landmark case protecting abortion rights in the U.S. 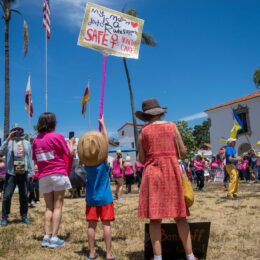 Protestors of all ages hoisted up signs throughout the march, with various phrases such as “My Rights Are Non-Negotiable” and “Abortion is healthcare” written on them. 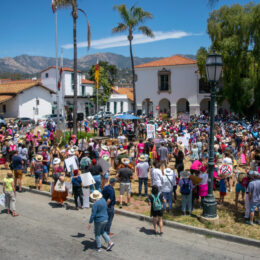 The protest began at De La Guerra Plaza, where speakers spoke to the crowd prior to marching. 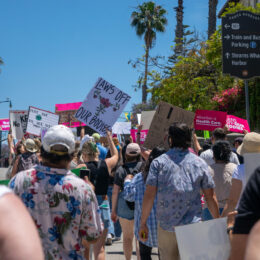 The group marched through State Street to Stearns Wharf, repeating chants like “Bans off our bodies” and “My body, My choice.”

The protest began at De La Guerra Plaza at 12 p.m., where speakers addressed the crowd. The group then marched to Stearns Wharf and then back to the plaza to wrap up the protest at 2 p.m.

The protest was one of three organized by Planned Parenthood of California Central Coast with two others occurring in San Luis Obispo and Ventura on the same day. Planned Parenthood previously held a protest in De La Guerra Plaza on May 3, the day after the leak of the Supreme Court preliminary vote against Roe v. Wade.

The event opened with comments from Planned Parenthood of California Central Coast members who then introduced state Sen. Monique Limón to speak.

“We have been rallying and creating these spaces since 1960, and we are still here, ready to march to vote and to fight to keep our reproductive health rights,” Limón said.

In her support of reproductive rights in legislation, Limón referenced the state budget proposal put forth by Gov. Gavin Newsom this May, which allocates money for reproductive health access.

“We are ready to put $40 million in our budget to ensure that low income and middle income patients have access to reproductive health,” Limón said.

Along with this $40 million, Limón said an additional $15 million would aid community organizations who engage in reproductive health outreach and education as well as a state website giving information regarding access providers.

“You need to know as constituents and voters that California has your back,” Limón told the audience.Following Limón, Rylee Williams and Jennifer Cortes, who both lead Planned Parenthood Generation Action at UC Santa Barbara, spoke about the organization’s work to make reproductive health resources accessible to the student community.

“As college students, we’re often asked to think a lot about our futures — who we want to be and what our choices will be — and it’s vital that we have the utmost control over those choices,” Williams said. “For some, abortion can be that indispensable aid to asserting control over our futures, and that’s why we will continue fighting for access to abortion access across our country.”

“Abortion remains your constitutional right as of today, and we all need to organize together to keep it that way. Vote for candidates that support the right to abortion this June and this November,” Reyes said.

Former California state Rep. Hannah-Beth Jackson was the last to speak and energized the protestors prior to the march.

“I remember life before Roe; I’m one of those old white hairs … Can we have those younger voices saying, ‘We will not go back?’” Jackson said to the crowd, who chanted the phrase back in response.

The group then marched through State Street to Stearns Wharf, repeating chants like “Bans off our bodies” and “My body, My choice.” Protestors hoisted up signs throughout the march with various phrases, such as “My Rights Are Non-Negotiable” and “Abortion is healthcare” written on them. The march dispersed when the group returned to the plaza at around 2 p.m.

“We march today, and we vote, and we support pro-choice candidates, and at the end of the day, we will be back to a place where we have our freedoms back,” Jackson said.