The Daily Nexus
Literature
“The Unwritten Books”: Best of National Poetry Month
May 8, 2022 at 6:22 pm by Artsweek Staff

As National Poetry Month closes, here are some of the Artsweek staff’s favorite poems! 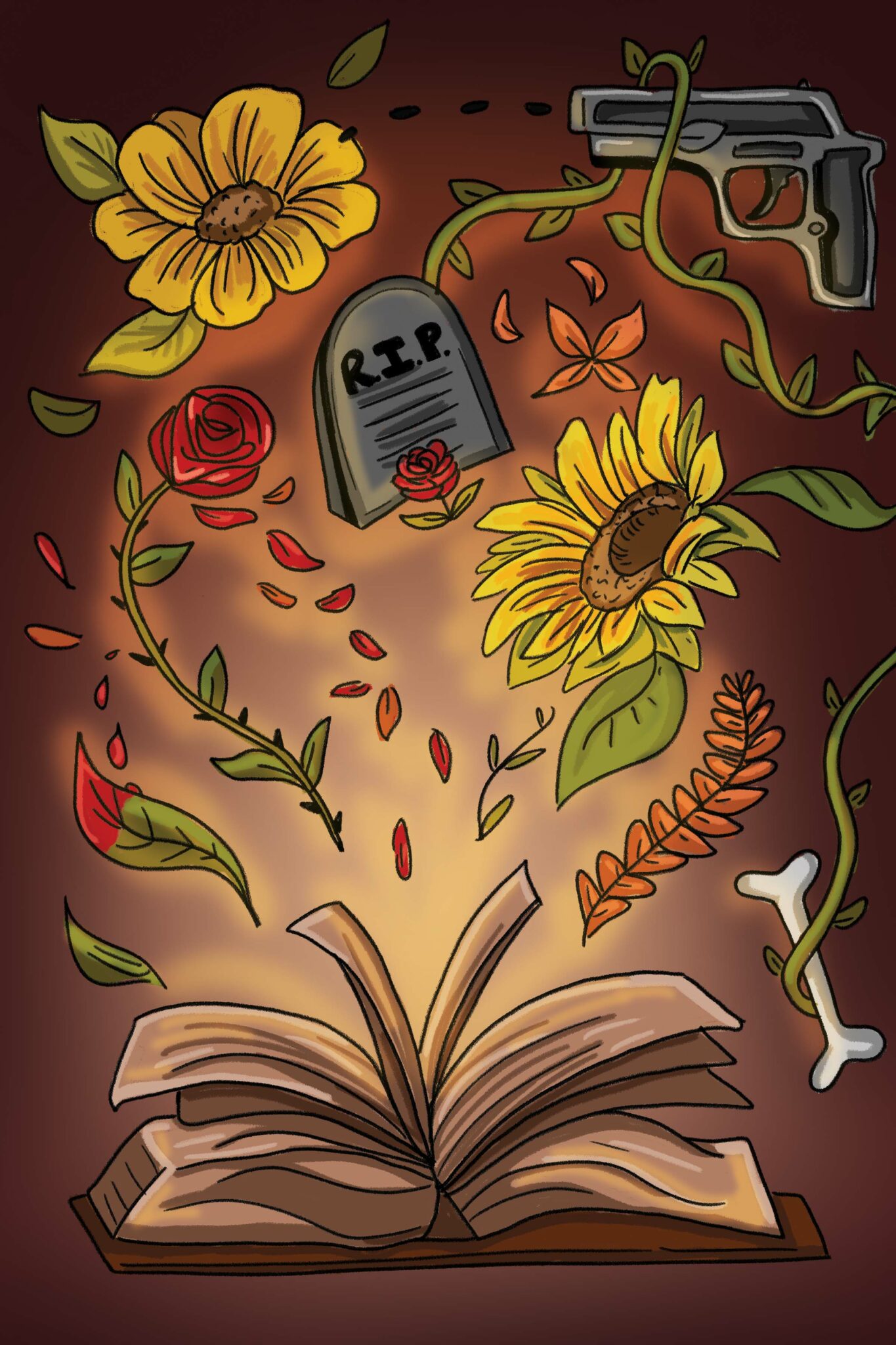 Why are guns so phallic looking, and why are almost all mass shooters men? Jamaal May’s poem, “Looks Like a Boy,” reveals guns as sexual entities that provide the shooter with a sense of power and invincibility instead of mere scraps of metal fused together with bullets pocketed inside. The relationship between a gun and its owner often has sexual implications, and guns — being violent in nature — give their user a dangerous perception of sex and the consequences that follow that poor perception. The users, more often than not, are men, revealing the inextricable link between masculinity and sexual violence. May describes this link by using a variety of figurative language throughout his poem, including a trope of teenage boys and implicit diction in relation to sexual violence.

“Requiem for the Spanish Dead” by Kenneth Rexroth

“I see the unwritten books, the unrecorded experiments / The unpainted pictures, the interrupted lives / Lowered into the graves with the red flags over them,” writes the poet Kenneth Rexroth in his poem “Requiem for the Spanish Dead.” It is a staggering meditation on the loss of life and the brutality of the Spanish Civil War. In my mind, Rexroth is one of the unsung heroes of 20th-century literature. Surprisingly, he briefly taught two courses at UC Santa Barbara during the late 1960s and lived in Santa Barbara until his death in 1982. What is striking about Rexroth is the simplicity of his language and his command of image. Rexroth was a dedicated outdoorsman and would make repeated sojourns to the Sierra Nevada mountains throughout his life. This personal aspect of Rexroth’s life makes its way into the first stanza of the poem, “The great geometrical winter constellations / Lift up over the Sierra Nevada.” There is a striking vividness to the “geometrical winter constellations” that is at once mysterious and mystifying — while at the same time being familiar. The first stanza situates Rexroth as a subject within the poem gazing at the stars in the Sierra Nevada before moving to the turmoil in Spain. This initial moment of zen is interrupted by the chaos of the war. By the end, Rexroth returns to comfort of the stars, “Voice after voice adds itself to the singing / Orion moves westward across the meridian / Rigel, Bellatrix, Betelgeuse, marching in order / The great nebula glimmering in his loins.”

“Here Is the Beehive” by Sarah Crossan

Sarah Crossan’s first adult novel in prose, “Here Is the Beehive,” is a masterclass in changing on a dime. Because of the novel’s short, choppy writing style, daily ordinary activities are juxtaposed among the most emotionally wrecking ideas. The novel is about Ana, an insurance agent, and the affair she has with her client Connor. When Connor dies suddenly, Ana and Connor’s wife Rebecca become closer, the depth of their relationship never known to Rebecca. The book goes back and forth between past and present, with the scenes of Ana and Connor together so blood-sizzlingly good that Ana’s grief over him is justified (“You pressed your nose into my neck and inhaled. ‘I could breathe you in forever, Ana. / I could live on this alone.’”) When Connor dies, Ana becomes increasingly distraught as she distances herself from her husband and kids, falling deeper into the hole that Connor left behind. Befriending Rebecca and babysitting her children, she goes up to Connor’s office and smells his keyboard, desperate for any last sign of him. Their relationship rocketed toward intensity, and his death did nothing to stop Ana’s memory of their time together. “Whenever we made love, your hands in my hair,” Ana narrates, “your mouth on my collarbones, your breath in my ears, / I wanted to smash the world apart to keep you. / I would have given it all up.” Each individual sentence of this novel about grief and longing is a punch in the gut; one minute, you’re in love, the next, you’re falling flat on your face, understanding and agreeing with Ana’s behavior in time.

One of my favorite qualities about Aria Aber’s poetry is the way she captures mundane, everyday experiences under extraordinary circumstances. In her poem “Gardens of Babur, Kabul,” she writes, “people still go to lunch / within a war, can you believe it?” There is something so obvious in the line “people still go to lunch.” Of course people go to lunch everyday, but that image is immediately disrupted by the following line, “Within a war, can you believe it?” The everyday action of people going to lunch becomes a horrific realization that they do so in a war zone. The violence and the tragedy goes unspoken within these lines, but it is there. Not too long ago I was discussing this poem with a friend, and I noted that this delicate interplay, this balance between everyday beauty and tragedy were, in my mind, the qualities of a great poet. I think Aber does this so well in this poem and in her poetry as a whole. The whole poem is filled with these transcendent lines of delicacy, such as, “In the walled garden, surrounded by cold marble / and rows of sanctioned lime trees, I grow” and “My eye is a slow thief, it stops.” Aber packs so much into her lines.

“Flowers from the Volcano” by Claribel Alegría

In my mind, Claribel Alegría is not just one of the great Salvadoran-Nicaraguan poets. Not just one of the great Central American poets, nor one of the great Latin American poets. She is one of the great World poets. While most of her poetry was centered on the sights and sounds of the Central American Isthmus, her work transcends localities and time. In her poem “Flowers from the Volcano,” Alegría muses on the fractured state of her beloved Central America. For much of the 20th century, Central America was a region in a perpetual state of war. As is evident of most Salvadoran poetry, memory is a common trope. She opens the poem with, “Fourteen volcanos rise / in my remembered country / in my mythical country.” Remembering is often difficult following war. It is easier to forget the horrors of war instead of facing them. But remember the horror she does in this poem, as she writes, “Who said that my country was green? / It is more red, more gray, more violent.” This line doesn’t directly reference the ongoing civil wars in Central America, which she does later in the poem. “The dead guerrillero / and the thousand betrayed faces, / the children who are watching / so they can tell of it,” she writes. Here we get images of a country in the midst of war. The dead guerillas leave behind thousands of children. The final line in this quote anticipates the cultural and historical forgetting that has become a central theme in contemporary Salvadoran poetry. Those children never tell of the dead soldiers, or the war.

A version of this article appeared on pg. 8 of the May 5, 2022, print edition of the Daily Nexus.